Urban Gardening in Chicago: New Roots for an Old Community 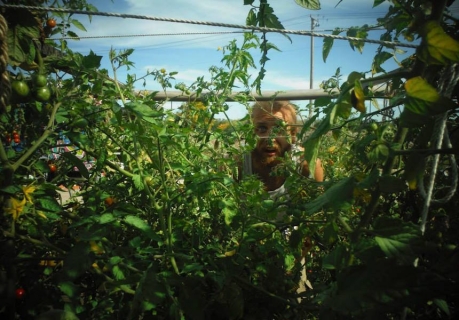 A Cooperation Operation volunteer, showing up to work on the first harvest day of the season, peers through tomato vines.   https://www.facebook.com/CooperationOperation

The neighborhood of Pullman, in southeast Chicago, was established in the 1880s by the business tycoon for whom it is named, George Pullman of Pullman Palace Car Co. The town was originally built to accommodate his employees, who enjoyed a myriad of residential benefits. Each home in Pullman had gas and water provided, and was surrounded by spacious, grassy yards. The price of garbage pickup and home maintenance was included in the rent. In 1896, Pullman was voted the world's most perfect town at the Prague International Hygienic and Pharmaceutical Exposition.

Pullman’s eminence has dwindled over the years and its lush lawns have yielded to industrial development, but the Pullman Historic District—designated as a National Monument by President Obama in February—is a neighborhood brimming with new personality. In 2013, Liz Nerat, an activist who plays punk-rock guitar when not exercising her green thumb, helped develop The Cooperation Operation (or CoopOp), an urban garden project that aims to provide healthy, organic produce to the residents of Pullman, a recognized food desert.

“Initially there were about 17 of us who came together,” says Nerat. “A lot of us were artists or musicians with an interest in social justice.” The group recognized “a very strong need” for healthy, organic food options in the Pullman neighborhood.

Generally, financial support for projects like this is more readily available to north side neighborhoods than to south and west side neighborhoods, where there is greater food scarcity. But the CoopOp—officially a 501(c)(3) as of this spring—was able to get off the ground quickly thanks to a successful Kickstarter campaign. In 2013 they surpassed their fundraising goal of $10,000 in a mere 25 days. Since then, the project has expanded considerably. The garden now boasts more than 30 raised beds, a greenhouse with its own 100-watt solar panel and a seven-foot, vine covered dome made out of bicycle wheels.

“We had a really good experience with Kickstarter,” says Nerat. The campaign garnered a few hefty donations from especially generous donors, but most of the money came from the accumulation of many small contributions. “It was nice to know that we had such a large network to support our project.”

The CoopOp is located on the corner of 114th Street and Langley Avenue. The 2.5-acre plot was once a Sherwin and Williams processing plant, and the dumping grounds for a deadly chemical cocktail of heavy metals and other byproducts of industrial-scale paint production. Though it was remediated by the EPA in 2003, the property remained closed until Nerat and her colleagues took initiative to reclaim it ten years later. They cultivated mushrooms to break down the contaminants in the soil and built raised garden beds out of discarded materials.

Thanks to Nerat and the other founders of the CoopOp, the neighborhood has a promising green future. Method, a sustainable cleaning products company, announced in 2014 that it plans to cultivate a 75,000 square-foot garden on the roof of its LEED Platinum certified manufacturing plant in Pullman. The local Wal-Mart has a green-roof as well. Growing sustainability efforts and an increased tourism appeal thanks to its new National Monument status have brought new life to the neighborhood. Nerat describes Pullman as a “real melting pot.”

The CoopOp has an unconventional business model. Instead of charging set prices, the organization provides Pullman residents with fresh fruits and vegetables in exchange for hours worked in the garden, material goods such as nails or gardening gloves, or a monetary donation of any amount. In a neighborhood where 20 percent of the population lives below the poverty level and there are no grocery stores to speak of, this service can be invaluable for Pullman families. “We never turn anybody away,” says Nerat.

The intention is to create a truly egalitarian space where community values take precedent over private ownership. Such a philosophy can be hard to convey to an audience accustomed to a consumerist narrative. Nerat says that it has been a continual challenge explaining to community members that “this is as much yours as it is ours.”

The CoopOp has grown more than seedlings on its little plot of earth. It is providing healthy, sustainably raised food, as well as a shared gathering place, to a community that previously lacked any such options.

As a communal space, the CoopOp gathers friends and neighbors from the heterogeneous community of Pullman. “It’s really beautiful to see people from all these different backgrounds come and work together,” says Nerat, “Our biggest success is how we’ve been able to help create a positive space in our community.”