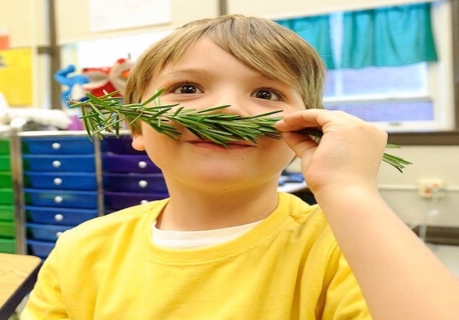 Getting kids excited about vegetables (while teaching how they're grown and sourced) could mean healthier lifestyles in Chicago Public Schools (CPS). That’s the philosophy behind Pilot Light, a nonprofit organization of some of Chicago’s top chefs on a mission to make proficiency in nutrition a mainstay of elementary education.

Pilot Light began in 2010 with four chefs—Jason Hammel, Paul Kahan, Matthias Merges and Ryan Poli—who had a vision for a curriculum that gives students the tools they need to make healthy choices for themselves and the environment through food.

Instead of introducing nutrition as its own subject, Pilot Light’s lessons are integrated into the existing curriculum. Students explore topics such as food access, dietary habits around the globe and cooking skills. Lesson plans align with the Common Core, a state standardized curriculum that was adopted by CPS in 2015. “We teach kids about all aspects of food,” says Alexandra DeSorbo-Quinn, the group’s executive director.

Pilot Light’s programs have proven effective. According to the organization’s outcome evaluations, 76 percent of students who have participated will try new foods, and 71 percent will ask their parents for healthier foods. Though it’s a popular belief that kids will not eat nutritional fare because it doesn’t taste as good as a burger and fries, Pilot Light’s data suggests that the obstacle is simply a lack of education.

Around 50 percent of sixth graders in CPS are overweight—more than twice the national average. Pilot Light’s attempts to curtail this growing health issue are based on the idea that if students have an understanding of healthy food from a young age they will be equipped to make good dietary choices throughout their lives.

The obesity epidemic disproportionately affects low-income communities in Chicago. This correlates with major discrepancies in the availability of healthy food throughout Chicago neighborhoods.  According to Mari Gallagher’s 2006 study on the impact of food deserts on public health in Chicago, around 400,000 Chicagoans live in areas with close access to fast food but highly limited access to fresh, healthy food from grocery stores. The lack of physical proximity to healthy food outlets contributes significantly to increased obesity rates, and heightens the risk of diabetes, cancer, cardiovascular disease and other chronic illnesses.

One aspect of Pilot Light’s mission is to advocate changes that promote healthier lifestyles for all children. As a part of their 4th Grade Change Makers series, a student who attends Anna R. Langford Community Academy in Englewood wrote to Mayor Emanuel describing the lack of access to healthy food in his neighborhood. He said, “We do not have a lot of grocery stores in our community. We need to build more grocery stores in our community so people do not have to walk far to the store.”

Students at Langford learned about the relationship between food and the Civil Rights Movement in Pilot Light’s social studies unit. By mapping food outlets in their own community, they found that Englewood is a food desert. As their final project the students took action by writing formal letters to national leaders.

“We have healthy snacks at Langford. The fresh fruits and vegetables are very good. I would like to have food like that in our neighborhood grocery stores,” one student wrote in a letter to Michelle Obama.

Big cities like Chicago are not the only regions that are afflicted with food deserts. Deficiency of food access can be an even larger problem for rural counties, 20 percent of which are considered food deserts, where all residents live more than 10 miles away from a supermarket. Pilot Light constructed their program with this in mind.  “We are creating a curriculum that will make sense no matter what community a teacher is in,” says DeSorbo-Quinn.

The young organization plans to expand in the future so that their lessons will be available to rural school systems. But before taking that on, Pilot Light hopes to broaden its reach in Chicago.

The organization brings their team of all-star chefs three to four times a year to prepare a lunch tasting for students at Disney II Magnet—Pilot Light’s “incubator” school where they experiment with and refine their programming. Bringing the tastings to other partner schools in the city is at the top of the organization’s agenda. “It’s such a unique and special aspect of what we do,” says DeSorbo-Quinn.

“We are excited for next year,” says DeSorbo-Quinn, in reference to Pilot Light’s expansion plans. The organization has demonstrated that providing education about good food elicits enthusiasm from students. As more children grow up knowing the value of fresh produce and a balanced diet, Pilot Light hopes those will become increasingly available.