Radical Joy for Hard Times: How to Live on a Damaged Planet 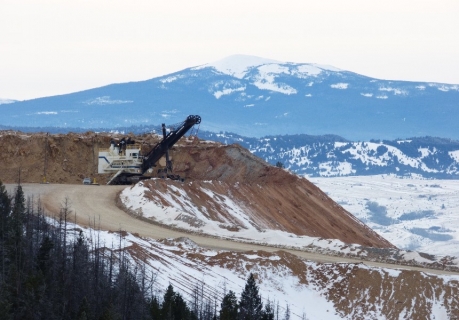 A stripping shovel excavator at a copper mine in Butte, Mont.   (Photo: Colton Hash / grassrootsrendering.wordpress.com)

Since the beginning of the Industrial Revolution, material progress and environmental destruction have gone hand in hand. To begin to understand the extent of the damage, drive to the end of a road in the mountains and walk until you come to a high point from which to look over the land. Then imagine the road receding, taking with it the billboards and cities it passes, erasing strip mines and strip malls, extinguishing streetlights and fracking flares, until it and all others vanish back into the distant ocean and the stars shine again bright and clear over wild (not to say uninhabited) country—as if history itself were rapidly rewound to a time before colonization. Look out again from your wilderness perch and, in the gap between the world in your mind and the world that is, catch a glimpse of how much has been lost.

Most of us live somewhere in those lost lands, those conquered and damaged places between the remaining scraps of wilderness. Trebbe Johnson has made it her work to help people come to terms with this life on a damaged planet. As she puts it: “How do we live with these places and find their beauty without going nuts?”

For more than 20 years, she says, she searched for an answer. In 2008 she founded Radical Joy for Hard Times, a nonprofit organization dedicated to connecting people with “wounded places” around the world. Every year, Radical Joy members gather for what are called Global Earth Exchanges. The group’s website describes the Exchanges this way: “experiential gatherings in which we visit wounded places, get to know them as they are now, share our stories of what they mean to us, and make a simple, spontaneous work of art there.” Last year, Exchanges took place in about half of U.S. states and more than 20 countries worldwide, says Johnson. They have been held by people in Kabul, Afghanistan, by indigenous Amazonian communities ravaged by gold mining, by West Virginians affected by mountaintop-removal coal mining. This year, Exchanges are scheduled for June 17.

“Sometimes people say ‘I’d love to participate, but I don’t have any wounded places,’ ” says Johnson, who lives in an area of natural gas fracking in eastern Pennsylvania.  “Well, we all do. And if you don’t think you have a wounded place near you, just think of the climate. You know, we’re living in a world that is increasingly under assault—particularly under the new administration.”

“The power of facing unpleasant facts”

The organization follows a simple practice that occurred to Johnson years ago on a backpacking trip in southern Utah: Face a beloved place that has been damaged, accept it as it is now, and make a simple gift to the place in appreciation for what it has given you. The “gifts” are impermanent works of art created using materials found onsite—sticks, rocks, sand, even garbage.

For example, take a river that has been polluted. “When you go and face this darkness and not try to avoid it,” she says, “it opens you up … and you come to this level of acceptance … and this amazing joy bursts through.” As Johnson sees it, this joy stems in part from the realization of nature’s tremendous power to endure on a timescale that dwarfs that of human experience: “You see the river keeping on flowing,” says Johnson.

In his poem “Carmel Point,” the early 20th century writer and self-described “inhumanist” Robinson Jeffers marvels at this phenomenon: “The extraordinary patience of things!” He continues: “Now the spoiler has come: does [the place] care?/Not faintly. It has all time. It knows the people are a tide/That swells and in time will ebb, and all/Their works dissolve.”

The idea of giving gifts of gratitude to places was inspired in part by Navajo families Johnson spent time with in the 1980s and 1990s. In a 2015 essay published in Orion Magazine—  “Uncommon Gratitude”—she writes:

"The Navajo families I visited would make a simple prayer to the plants they wished to harvest, the sheep they were about to butcher, explaining that they intended to take from them. They assured those living beings that what they were doing was necessary for the good of the human inhabitants of the place, and expressed their hope that the plant or sheep people might continue to flourish as well. Only then would they harvest the plant, draw the knife across the throat of the sheep. The reciprocity in this simple ceremony was implicit."

Johnson hopes the Earth Exchanges can inspire in participants this sense of reciprocity and immutable connection to the natural world.

In addition to Native traditions and to the Buddhist concept of “acceptance,” the Radical Joy practice seems also to require what George Orwell called the “power of facing unpleasant facts.” The organization is dedicated not to ferrying people quickly past damaged places en route to celebrate or defend the yet unspoiled natural splendors, but to bringing people face to face with what the spoiler leaves in its path—a practice that has the power to drag ecological destruction out of abstraction.

Johnson also hopes the practice will rescue damaged places from oblivion. “Places that are damaged tend to be overlooked by people,” she explains. “They sort of die in people’s minds.” And with these deaths, the mental map of places that are “natural” or “wild” shrinks smaller and smaller. The Radical Joy website puts it this way: “Creating a sustainable, thriving future on Earth, depends upon opening our hearts to the natural world in its brokenness as well as its splendor.”

Such sentences would be at home in William Cronon’s 1995 essay “The Trouble with Wilderness,” an influential critique of the environmental movement. Cronon calls for an end to the destructive duality of “Nature” and “Humanity” that he argues is often contained in the concept of “Wilderness.” He writes:

Wilderness gets us into trouble only if we imagine that this experience of wonder and otherness is limited to the remote corners of the planet, or that it somehow depends on pristine landscapes we ourselves do not inhabit. Nothing could be more misleading. The tree in the garden is in reality no less other, no less worthy of our wonder and respect, than the tree in an ancient forest that has never known an ax or a saw.

Cronon urges people to understand their reciprocal relationship with the natural world—a relationship that he, like Johnson, hopes will lead to a practice of “deep reflection and respect” and “remembrance and gratitude” to “accompany each act of use.”

To Johnson, Radical Joy is a starting point from which further action may grow. She thinks the environmental movement has ignored the vital question at the heart of her organization: “How am I going to live with what’s here in the moment—as I work toward something that’s better in the future?”

The obvious problem, however, is that making an offering of gratitude to a place with which you have a reciprocal relationship of giving and taking is a different thing than making an offering to a place destroyed by a culture of limitless extraction and waste. Radical Joy for Hard Times is concerned almost exclusively with reconciling the present with the past and celebrating the beauty that endures—a worthy and difficult undertaking. But in itself a gift does nothing to stop the ongoing destruction.

Many of the ideas behind Radical Joy’s practice are ancient, but an organization dedicated to helping people find acceptance for and beauty in a damaged world—a world in which undamaged places are shrinking toward disappearance—is distinctly modern. The organization acts as a sort of mass support group for those of us living in the lengthening shadow of environmental catastrophe, whose so-called leaders seem not only unable to avert the crisis but unwilling to acknowledge it.

But learning to live on a damaged earth need not be divorced from actions to prevent further damage. The Lakota tribes and other natives fighting the Dakota Access Pipeline at Standing Rock, for example, have taught us that accepting and loving a damaged place can and should include fighting to protect it. Since they signed the Fort Laramie Treaty of 1868, which created the Great Sioux Reservation, the Lakota have seen their treaty lands repeatedly stolen and desecrated for resource extraction: gold mining in the sacred Black Hills, uranium mining in the Cave Hills of present-day South Dakota, coal mining in the once great buffalo hunting grounds of the Powder River country of present-day Montana. Signs and flags from the Native tribes who pledged their support for water protectors at Standing Rock line the entrance to the main Oceti Sakowin camp in December. (Photo: Joseph Bullington)

The pipeline resistance camps themselves were built on the banks of the Cannonball River—so named for the large, round rocks that were turned up by the rough water where that river converged with the Missouri. In the 1960s, however, the Army Corps of Engineers built the Oahe Dam, which flooded much of the best land and most of the timber on the Standing Rock Reservation. Now, the river flows quietly into the man-made reservoir and the stones are gone.

When I was at the main anti-pipeline camp in November and early December, Native elders held a water ceremony before dawn every morning in which dozens of people offered prayers and gifts of tobacco to the river. These prayers were not separate from whatever else might happen that day—they were the foundation for it. For many people at Standing Rock, prayer and gratitude to the land were the source of the spiritual strength and courage necessary to take direct actions that slowed pipeline construction and to stand their ground in the face of police violence.

Not quite satisfied with Radical Joy’s distinction between giving gifts to damaged places and acting to prevent further damage, I emailed Johnson with one last question: Couldn’t the act of defending a place contain a gift of gratitude? Hypothetically, if a person were to find a place he or she loved being leveled and the trees uprooted to build a strip mall or a drill pad for an oil well, wouldn't it be a beautiful gift to that place if he or she made a sculpture of a tree there—say, from the engine parts of a nearby bulldozer?