Trump Gaslights Farmers on Trade War, But They’re Catching On 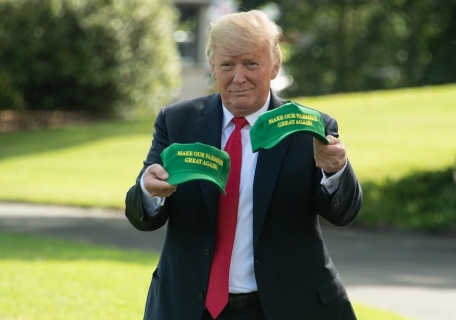 The nexus for defining gaslighting comes from Ingrid Bergman's brilliant performance as Paula in George Cukor's 1944 film Gaslight. In the movie Bergman's character witnessed the murder of her aunt as a child. Years later she marries Gregory who, in a twist of fate, returns with her to live in the very house where her aunt was killed. As it turns out Gregory isn't a loving husband, but rather a cold and calculated abuser whose insidious and chilling lies and actions have Paula coming unhinged and doubting her sanity.

Over seven decades later, gaslighting has become a White House weapon of choice in trying to convince individual American farmers all is well while they suffer financially from the POTUS agricultural policy choices. (By the way, as early as February 2017 I cautioned in a blog that farmers needed to be on alert.)

So what is gaslighting? We'll define it as manipulative behavior designed to sow seeds of uncertainty in victims with the objective of gaining power and control. Over time, gaslighting creates self-doubt, which causes the victims to question their reality. The POTUS and his toadies have been gaslighting farmers in general and soybean farmers in particular with his trade war against China.

The tools of gaslighting include:

• Blatant lying. In targeting China with billions of dollars of import tariffs POTUS tweeted to farmers that “trade wars are good, and easy to win.”  Of course, that is utter nonsense.

• Deny, Deny, Deny.  Now that America is more than a year into the trade war and it hasn't yet been resolved (how can that be … yeah I'm being snarky) POTUS has denied ever saying that trade wars are easy to win.  The goal is to make farmers doubt their memories and ultimately replace their reality with that of the POTUS.

As an aside, blatant lying works best when you can enlist others to lie as well. Enter The Federalist, a conservative pro-POTUS website and newsletter. Willis Krumholt's Aug. 20 article “Why Farmers Aren’t Going To Abandon Trump Over The Trade War” is chock full of gaslighting goodies. For example, Krumholt claims China is buying less soybeans from the U.S. because their pig population is being decimated by African Swine Fever. Well, actually, Chinese soybean imports are surprisingly robust. It turns out numerous Chinese farmers notorious for feeding their pigs table scraps are turning to soybeans. China is still buying plenty of soybeans … from South America.

Krumholt also puts the blame for farmers financial problems on the previous Administration. Krumholz says Barack Obama's monetary policies kept interest rates low: “Too many farmers took on too much debt, dangerously overextending themselves.”
I can trace farmer cash flow problems back to 2013 when huge corn and soybean crops reduced farmer's bottom lines. That, far more than low interest rates, is at the root of farmer woes.

• Flattery. Gaslighters' stock in trade is to tear down victims, build them up, and repeat. The idea is to get victims used to being torn down. The POTUS has constantly told farmers they need to take one for the team because it will all eventually work out, like this May 14 tweet: “Our great Patriot Farmers will be one of the biggest beneficiaries of what is happening now. Hopefully China will do us the honor of continuing to buy our great farm product, the best, but if not your Country will be making up the difference based on a very high China buy......”

• Words v. Actions. A gaslighter likes to talk … and talk … and talk. The hope is to overwhelm the victim's reality. But the words mean absolutely nothing. Time and time again (and there are far too many to list here) the POTUS has told farmers that things are going swimmingly in the China war when nothing is further from the truth.

Okay. Deep breath. Let me be blunt. All this gaslighting behavior demonstrates a profound lack of respect for the U.S. farmer. And for the most part, farmers support of POTUS hasn't eroded.
In fact a producer survey from the Purdue Center for Commercial Agriculture released in early August showed a record-high 78% of farmers believe the POTUS trade war will ultimately benefit U.S. agriculture.

It reminds me of the fraternity hazing in Animal House: “Thank you sir, may I have another.”

But times they may be a-changing.

At last, individual farmers are publicly announcing their increased frustration with the 19-month China trade war. A small sample just since Aug. 1:

And then there's this astonishing exchange between farmers and USDA secretary Sonny Perdue from an August Farmfest event in Minnesota. Trying to deflect intense criticism from farmers toward the end of the event, Purdue offered this up: “I had a farmer tell me this in Pennsylvania,” Perdue told the audience at a listening session hosted by House Agriculture Committee Chair Collin Peterson (D-MN). “He said ‘What do you call two farmers in a basement?’ I said ‘I don’t know, what do you call them?’ He said ‘A whine cellar.’”

Calling farmers a bunch of whiners probably won't keep farmers on board the China-trade-war express.

Here's a truth. The POTUS won the White House by the hair of his chinny-chin-chin by winning Wisconsin, Michigan, and Pennsylvania by a total of 79,646 votes.

Could that many farmers stay away from the polls in 2020 if they are not made whole by the China trade war? You bet they could.

Dickey spent nearly 30 years at University of Illinois at Urbana-Champaign’s NPR member station WILL-AM 580 where he won a dozen Associated Press awards for his reporting. For 13 years, he directed Illinois Public Media’s agriculture programming. His weekly column for the Midwest Center covers agriculture and related issues including politics, government, environment and labor. Email him at dave.dickey@investigatemidwest.org.