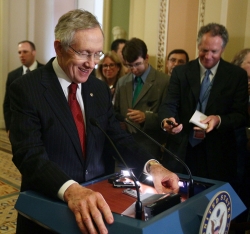 Senate Majority Leader Harry Reid (D-NV) speaks to the media after a closed door meeting with Senate Democrats and Vice President Joseph Biden, at the U.S. Capitol, on August 1, 2011. Congress is due to vote today on a agreement to extend the federal debt limit while enacting spending cuts.   (Photo by Mark Wilson/Getty Images)

Last night, President Obama and Senate Majority and Minority leaders Harry Reid and Mitch McConnell announced they had reached an agreement on cutting $1 trillion in spending in exchange for raising the debt ceiling. House Speaker John Boehner indicated he was also in agreement, subject to voting to take place in the House on Monday.

This latest "deal" is essentially the same that was reached by Harry Reid in the Senate on July 29 and Boehner in the House on July 27, with two major changes—one favored by the Republicans and another by Obama. These two changes were then ‘traded off’ this weekend, bringing the parties to a deal.

Boehner and Reid all but came to an agreement last Friday, July 29. Their respective proposals called for $917 to $927 billion in spending cuts, only $10 billion apart. Both proposals contained no reference to tax loophole closings. The tax hike idea was given up by Obama and the Democrats early last week, bringing the Democrats in line with the Republican position on spending vs. tax hikes.

The only substantive difference as of July 29 between the two was that Reid also proposed $1.044 trillion in additional cuts in defense spending, as well as a measure that prohibited a re-opening of the debt ceiling issue before the  November 2012 elections.

Sunday’s Boehner-Reid agreement effectively drops explicit cuts in defense, another Republican position all along. Reid’s defense cuts are now replaced with ‘triggers’ in defense spending reduction. The 'triggers' concept has been a maneuver used by Congress on occasion in the past. It is designed to let one party save face, allowing it to appear that their provision is retained in the bill, when in reality it likely won't be implemented.

With defense spending cuts taken effectively ‘off the table’ this weekend, the only remaining substantive issue was whether the debt ceiling would be allowed to come up as an issue before the 2012 elections. Republicans now agree it will not.

This Republican shift signals that Reid’s previously proposed $1 trillion additional cuts in defense appears, in retrospect, to have been a ‘trading item’—a tactical maneuver designed to get the Republicans to agree not to revisit the debt ceiling issue again before the coming 2012 elections.

But the Republican leaders in the House and Senate don’t need a debt ceiling debate again to get further cuts. The 2012 budget deadline of October 1 will do just as well for a threat to shut down the government.

So, in summary, it appears the deal just negotiated means both parties agree on cutting $1 trillion in spending, only with no tax hikes. The Republicans will shift to the 2012 budget deadline for a new hammer to extract extra spending cuts. Defense will remain effectively untouched. And, in exchange for $1 trillion in cuts and no tax hikes and leaving defense spending untouched, Obama gets an agreement not to raise the debt ceiling issue again before his next election.

But don’t think that’s the end of the story. It’s just the beginning.

The bigger attack on Social Security, Medicare, Medicaid is still to come. The next round in what amounts to class economic warfare via legislation is the 2012 budget negotiations, which are supposed to conclude by September 23. Republicans will get another bite of the apple in spending cuts at that time. And Obama and the Democrats will likely cave in to those demands yet again, as they have repeatedly over the past year.

But the even bigger bite will come as a result of another provision in today’s agreement: the creation of a so-called ‘Bipartisan Commission’ to reduce the debt and deficits by even greater magnitudes. That Commission will make further major proposals for cuts by November of this year, to be voted on by Congress before the year's end.

Following Senators Reid and McConnell, President Obama spoke on national TV on Sunday night to endorse the tentative Boehner-Reid agreement and to announce the "Bi-Partisan Debt Reduction Commission." In his brief comments he employed an important phrase that TV commentators mostly overlooked. He said, “The Commission’s proposals will be submitted for an up or down vote only” by members of Congress.

That means some small group—no doubt appointed by him or congressional leaders—will now decide solely between themselves the composition and magnitude of cuts to Medicare, Social Security, Medicaid, how much tax loopholes will be closed, and how much Defense spending will be cut. The rest of Congress will then be limited to voting ‘yea’ or ‘nay’ and that’s it.

The conservative composition of such recently appointed commissions is well known. There was the Simpson-Bowles deficit commission appointed by Obama in 2009 that was lopsidedly conservative. And Obama’s commission to recommend Health Care legislation that was composed of mostly conservative Republican and Democrats. The forthcoming ‘Bipartisan Commission’ will almost certainly assume the same conservative-leaning composition. We can expect $2 in cuts in Medicare and Social Security for every $1 in tax loophole closing and Defense spending reductions…if we’re lucky.

This deal of the past weekend to raise the debt ceiling in exchange for $1 trillion in spending cuts—with no tax hikes or defense cuts—clearly shows that politicians in Washington are concerned first and foremost with their re-elections. Democrats don’t want to be confronted with another debt ceiling debacle during their re-election campaign. Both Republicans and Democrats are, furthermore, intent on protecting their Defense industry friends, and on ensuring their corporate campaign contributors don’t have to pay their fair share in taxes. The rest of America gets to pay the bills and pay the price.