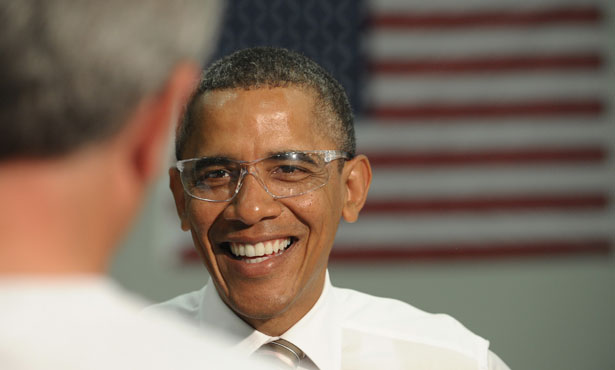 Productivity is up, so where are the jobs?

When President Obama announced his jobs plan last week, he proclaimed that more goods should be produced domestically to help bolster the struggling manufacturing sector.

“If Americans can buy Kias and Hyundais, I want to see folks in South Korea driving Fords and Chevys and Chryslers. I want to see more products sold around the world stamped with three proud words: 'Made in America,' ” he said.

The declaration, which was prefaced earlier by his support for new free trade agreements, drew applause from members of Congress. But some experts are saying the U.S. has not established a clear plan on how to revive the manufacturing industry beyond outlining broad goals, adding that politicians have not paid enough attention to the decline.

Manufacturing is projected to have the highest contribution to national output by 2018, but jobs are not expected to grow, a new study has found. With companies already eliminating jobs or moving them overseas, that hurts areas like the Midwest, where manufacturing jobs have been disappearing. According to a new report by Georgetown University’s Center on Education and the Workforce, the industrial heartland was hardest hit by the economic crisis. More than 610,000 manufacturing jobs have been eliminated since 2007, representing nearly one-third of the sector’s national job losses during the recession.

With an emphasis on more service-oriented labor, many of these jobs that provided decent pay with few skills are gone for good, the report said. Two million jobs will be added by 2018, but only because workers are retiring. Many of the Midwestern states have shifted toward other industries like healthcare and education. That shift is projected to create demand for higher skilled workers with college degrees, creating a gap for middle-income earners hoping to find mid-skilled work.

And overall, the manufacturing industry has contributed a smaller share to the country’s gross domestic product. More than 60 years ago, the industry accounted for 28 percent of the U.S. economy. Today, it has fallen to 11.7 percent, indicating that the jobs are disappearing. In the Midwest, the manufacturing sector has fallen from 39 percent of jobs during the 1960s to 12 percent today, only slightly higher than the national average of 9 percent.

Yet even though the GDP has fallen, companies are still relying on manufacturing employees to work harder. In 2010, worker productivity was three times higher than it was in 1970, with each employee, on average, now producing $300,000. But jobs are not expected to grow in the future despite higher output. The report writes:

Our projections show that manufacturing output will grow from roughly $4.0 trillion in 2008 to $4.9 trillion in 2018, ranking it as America’s largest industry when measured by contributions to national output. But that will not translate to job growth. In fact, even as manufacturing’s output explodes over the next decade, its workforce will contract.

Even though many Americans are working harder than in the past, many multinational companies have shifted much of their production abroad. During the last decade, corporations have cut 2.9 million domestic jobs but added 2.4 million abroad. Those companies include General Electric, headed by chief executive Jeffrey Immelt, who heads Obama’s Job Council.

The Center for American Progress explains why it's important to keep operation and manufacturing jobs in the domestic sphere:

And with those jobs goes American leadership in technology and innovation. This is why having a critical mass of both manufacturing and associated service jobs in the United States matters. The “industrial commons” that comes from the cross-fertilization and engagement of a community of experts in industry, academia, and government is vital to our nation’s economic competitiveness.

The Obama administration has instituted some initiatives. In June, the president announced a $500 million plan to spur jobs and technological innovation as part of a manufacturing partnership with businesses, universities and government. As he said in his speech, some skills training are also offered at community colleges.

The specific plan, however, does not appear concrete. An MIT economist told the New York Times that the U.S. is the only industrial power without a “strategy or even a procedure for thinking through what must be done when it comes to manufacturing.” Others point to the ostensible decline and shift toward financial and real estate sectors as a reason why politicians aren’t paying attention.

The old days of manufacturing may be long gone, but this is an industry that is slated to soon have higher productivity output than any other in the country; it's also an industry whose decline can further widen the middle class gulf unless adequate education and training programs are put in place. Tax cuts and new spending are a large part of Obama's jobs plan, but the consequences of neglecting the manufacturing sector is hard to ignore.