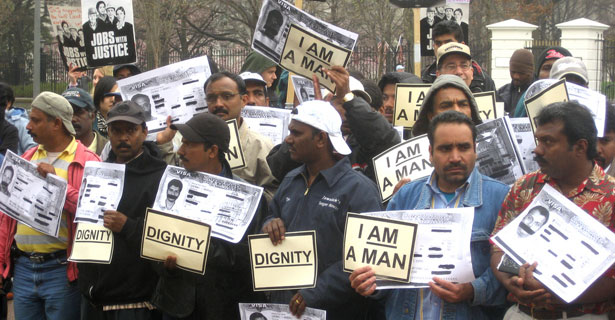 Workers with the New Orleans Workers Center for Racial Justice and the Alliance of Guest Workers for Dignity demonstrate against "sub-human working and living conditions" at the contractor Signal International.   (Photo courtesy of Jobs With Justice via Flickr)

When immigration comes up in Washington, politicians either politely ignore the issue or engage in lively debate on how best to punish and get rid of undocumented workers. Yet lawmakers give a strikingly warm embrace to certain types of immigrants. Those are the “legal” ones who enter with special visas under the pretext of having special skills or filling certain labor shortages--like Silicon Valley tech jobs or seasonal blueberry harvesting. So what makes one kind of immigrant valuable and another kind criminal?

So-called guestworker programs attest to the arbitrary politics of immigration that has generated a perfectly legal, global traffic in migrant labor. A new report by the advocacy group Global Workers Justice Alliance reveals how various federal visa programs funnel workers into special high-demand sectors, like amusement park staff or computer programmers. Like their “illegal” counterparts, these workers are inherently disempowered: they may be dependent on employers for legal status in the U.S., have their wages regularly stolen, or suffer sexual or physical abuse. Many lack the access to the health care and overtime pay that citizen workers often take for granted. As products of globalization, they’re sometimes compelled to endure virtual indentured servitude to provide critical wage remittances to their families back home.

The economic logic is simple, according to the report: externalize the costs to those who can’t afford to challenge authority.

Especially of note are the visas outside Department of Labor supervision. Under these visas, workers who enter are structurally cheaper than U.S. workers, because employers are legally exempted from certain payroll taxes, legally able to pay wages lower than fair market wages, and/or legally empowered to pass on many basic costs associated with employment – such as transportation, visa fees, housing and more – to the workers.

Kanthi Salgadu, a human trafficking survivor whose story was documented by the Coalition to Abolish Slavery and Trafficking, migrated from Sri Lanka to work as a housekeeper in Singapore, and later entered the U.S. on a visa, under pressure from her employers and employment agency. She then endured virtual captivity as a domestic servant for a Los Angeles household, where she was physically abused by her boss, “was not paid, and was not allowed to contact her family, aside from occasional letters to her mother.”

In Maryland’s crab industry, visa-based women workers from Mexico reported taking out loans to pay recruiters' fees and then working for poverty wages under harsh, abusive conditions, picking crab meat by the pound, with “paycheck deductions for knives, gloves, and other basic tools and safety equipment.”

Recently, a group of youth who came to the U.S. for an "educational experience" under the J-1 visa summer work program ended up getting worked to exhaustion at a Hershey facility in Pennsylvania. The students' protests prompted the State Department to initiate moderate reforms to the program, though labor advocates say the entire visa system must be overhauled.

“An employer can blacklist with impunity,” stated Silas Shawver of the Centro de los Derechos del Migrante. “All they have to say to the recruiter is, ‘I don’t want that worker again,’ and it’s done.” The majority of workers who report blacklisting to the organization have not been involved in concerted or sustained action, or union organizing – often, the employer may be reacting to a one-time, individual act of protest, such as worker raising a concern about workplace safety, speaking up in support of another worker who was fired, or questioning wage deductions on a paycheck.

The pool of marginalized workers feeds into an escalating climate of hostility toward labor in general. While the report focuses on abuses of migrants, it also reveals how corrupt visa policies erode standards for all workers. In some cases, U.S. workers faced displacement and systemic discrimination. For example, farm contractors may sidestep local workers to hire “cheaper,” more vulnerable migrants--and stoke racial resentment in the process.

The system is designed to pit U.S. workers and temporary foreign workers against each other.... Under the circumstances, it is difficult to forge solidarity among U.S. and foreign workers on the many workplace issues they may hold in common – wage theft, occupational safety, retaliation against those who try to organize.

But a few advocacy groups have managed to rally immigrant and non-immigrant workers in solidarity around common causes, advocating for equitable and decent working conditions for all. California Rural Legal Assistance, for example, works to prevent discrimination and exploitation by monitoring farm employers and informing locals about job opportunities that should be open to all.

Still, nativist groups have capitalized on U.S. workers’ fears of economic displacement with jingoistic hate campaigns. Pro-migrant activists warn that stoking xenophobic tensions--which encourage terroristic immigration-enforcement crackdowns and mass deportations--actually weakens labor. Not only are immigrants at the heart of an inevitable demographic shift in the workforce; they’re rooted in American communities as family members, students, taxpayers and neighbors. And they could wield enormous clout as part of the labor movement, if fully included in it.

Labor can only challenge the dominance of capital by building strength in numbers. Arbitrary immigration policies have produced a dehumanized underclass and forced more workers to fight for corporate America’s crumbs. The real division isn't between “legal” and “illegal” labor, but between all workers on one side, and a criminally exploitative system on the other.

Note: Quoted text from the report was lengthened since initial publication.