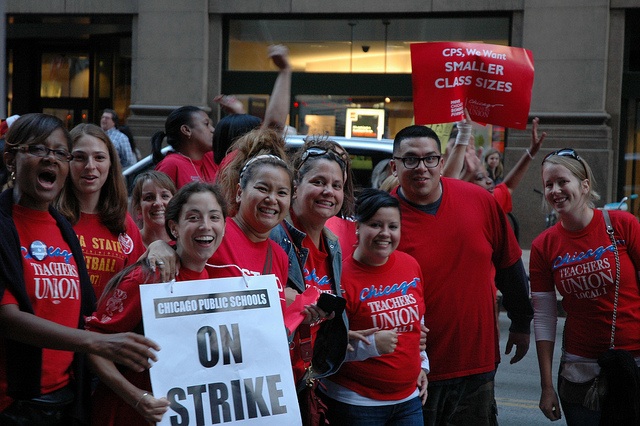 Marchers at a Day 1 Board of Education rally. (Chicago Teachers Union / Flickr)

This weekend--after five days on strike, daily mass marches, and marathon negotiations--the fired-up, 29,000-member Chicago Teachers Union and its supporters are holding another, potentially bigger rally. And CTU president Karen Lewis once again is leading her team in long hours of negotiations.

But the weekend's actions may have a new, celebratory edge: The strike may be over Sunday on terms that teachers can accept, Lewis announced on Friday afternoon. In statements to the press, Mayor Rahm Emanuel and public school officials described having reached a "tentative framework" for a deal.

Negotiators face one last hurdle: They must translate that framework into satisfactory concrete contractual language.

"They are very suspicious," Lewis said of teachers (who also "like to read"). "We have been a little burnt by the Board in the past." Last year Lewis and CTU legislative staff prematurely signed off on Illinois' Senate Bill 7 without reading closely the final version, which contained language to which the union objected.

Lewis, a tough bargainer who appears to have strong support from union members (with help from Mayor Rahm Emanuel's provocative stance), would not detail the basic agreements for the framework of the proposed contract.

On one of the more contentious issues, how to evaluate teacher performance, Lewis said, "I think we feel very comfortable" with the framework. But she said there was no decision on the length of the contract: CTU wants two years, the school board four.

At this point, despite the lack of confirmed details, various statements to the press suggest that the union has won some substantial victories, blunted the most antagonistic Chicago Public Schools demands, and reached tolerable compromises on the stickiest topics, like job security. The union did not apparently achieve many of its goals for improving the schools, such as more arts education and smaller classes (although unenforced guidelines for class size reportedly will remain in the contract), but thanks to a recent law, the Board of Education was not legally obliged to bargain on most of those school-improvement proposals.

Although public irritation with the strike could grow if it drags on, support is currently high. Teachers are coming to Saturday's demonstration from other cities and states--including some from Madison, Wis., who are also celebrating Friday's appellate court decision overturning the bulk of Gov. Scott Walker's anti-union legislation.

And a new poll out Thursday showed 55.5 percent of Chicago households supporting the strike, including 66 percent of parents of public school children and nearly two-thirds of blacks and Latinos polled. Asked who was to blame, 53 percent blamed management--34 percent Emanuel, 19 percent the school board--and 29 percent blamed the teachers.

With the union still holding a strong position in the conflict, union leaders want to nail down the details of every provision before presenting the contract on Sunday to roughly 800 union delegates. If the delegates are satisfied, they could suspend the strike and send the contract to the members for ratification.

But with new costs--a result of Emanuel's longer school day and the new contract's compensation for that work--in a system that is already facing a budget shortfall and with the school system reportedly planning to close as many as 100 schools (and opening many new charters), teachers face tumultuous times ahead, even if they win a good contract now.