As One Wal-Mart Warehouse Strike Ends, Another Snowballs 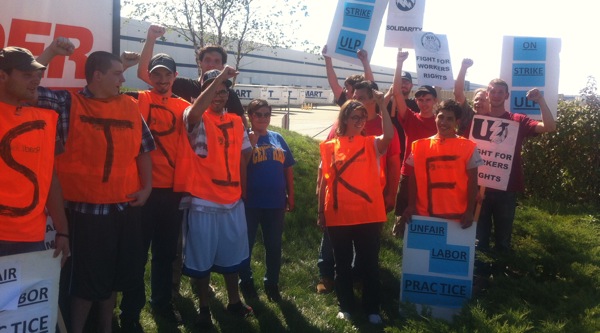 Early on Friday, three dozen non-union workers at a large Walmart warehouse near Riverside, Calif., ended a 15-day walkout protesting poor working conditions. But outside of Chicago, another group of Wal-Mart warehouse workers continue to strike and have called for hundreds of supporters to join them in non-violent civil disobedience at a rally at the huge facility on Monday.

The southern California workers, most of whom earn minimum wage, cited family financial problems as one reason for discontinuing the strike. The decision was made upon their return from a six-day, 50-mile "WalMarch" to downtown Los Angeles to call attention to appalling safety problems and working conditions in the vast Inland Empire warehouse industry.

The spontaneous California work stoppage helped inspire the Sept. 15 walkout by 30-plus workers at Wal-Mart's huge Elwood, Ill. warehouse. The Illinois workers were angry about poor working conditions and apparent retaliation by their employer, a Wal-Mart contractor, against four workers who filed a lawsuit over subminimum wages.

The lawsuit is the sixth filed by Elwood workers in three years. Three prior suits have resulted in settlement payments to workers. The latest claims that Roadlink Workforce Solutions--one of four subcontractors providing long-term "temporary" workers to Schneider Logistics, which operates the warehouse for Wal-Mart--frequently failed to pay overtime and minimum wage, in violation of federal, state and local laws.

Workers at both the Illinois and California warehouses have similar complaints: wage theft, harassment, safety hazards, being denied breaks, and working in extreme temperatures with inadequate water. California's workplace safety agency, CalOSHA, is  investigating the Southern California warehouse in response to a complaint filed by workers about working conditions and excessive heat. It may soon pursue an additional complaint about repetitive motion injuries.

Workers have been less successful in getting their complaints heard directly by Wal-Mart. They face a complex structure of authority and responsibility created by the company, with layers of contractors between workers and Wal-Mart management. In response, workers have filed numerous requests with Wal-Mart to enforce its code of conduct throughout its supply chain.

About ten days ago Walmart told some news outlets, including Huffington Post, that it would review contracts and look into third-party monitoring of all contractors, a small step towards taking responsibility. But it did not sign any agreement with either group of strikers.

And when the Southern California workers returned to the job Friday--receiving high-fives from non-striking workers--they found that some of the safety problems remained. The workers alerted management, which shut down the unsafe areas of the warehouse.

"They feel they have a stronger voice now over working conditions," says Elizabeth Brennan, spokesperson for Warehouse Workers United, a project of Change To Win, a union federation trying to improve work for the 85,000 people employed at warehouses in southern California. While they feel they've won a big victory--"a step forward, not an end-all solution," Brennan says--they also anticipate possible retaliation, even though it would be illegal.

That's what the Illinois workers say happened after they filed a wage theft suit on Sept. 13 against Wal-Mart with the assistance of Warehouse Workers for Justice, a project of the United Electrical Workers (UE). Plaintiff Philip Bailey says that management fired him and the other named plaintiffs the next day, then changed its mind and suspended them without pay.

After losing his job in Detroit last year, Bailey came to the Chicago area to seek work because there were jobs available in the warehouses. This is partly due to very high turnover rates, which can pose a barrier to organizing. In the end, he says, it was a group of workers who had managed to last a half year or more who formed the core of the protest action.

"What we have in common is we're pretty marginalized and desperate," Bailey says. "People are fed up in there and not willing to give up without a fight. The prospect of working these low-paying jobs for long hours became scarier than risking losing the job to improve it. People realized we won't get anything until we stand together."

In September, about 40 workers signed a petition "about unsafe equipment, extreme heat, and taking away breaks, making [shifts last] 6 or 7 hours," says veteran warehouse worker Ted Ledwa. On Saturday, after Bailey and some other workers were fired and then suspended, a group of the petitioners tried to take their demands to management.

"We had to walk around the entire warehouse to collect everyone," Ledwa says, "and all the time management was saying we were trespassing and had to leave. All we wanted to do was present the petition to management. As we came around the corner, managers with these riding forklifts cut our group in half, but we continued to walk. They told us we were going to be escorted out of the building by the police. They refused to take the petition. My manager said that we don't want to mess with him. We said we didn't want to mess with anybody. We just wanted someone to take the petition and hear our grievances. Their answer is the police are on their way. You're going to be arrested."

Managers were reportedly erratic in their response. Initially, Ledwa says, the petitioners were also fired, but managers later called to say they had been suspended. Now, both the suspended plaintiffs and the suspended petitioners, joined by a few other workers, are striking together over unfair labor practices, including discharge for lawful collective action. Ledwa believes those who kept working were sympathetic but afraid of losing their $10-an-hour jobs.

"Management uses threats and intimidation as part of their daily routine," he says. "I've worked at several warehouses, and I've never seen it so bad. They have no respect for the people. They say if you can't do the job, we'll get someone else. There's a constant threat. They're always trying to pit people against each other, to create animosity among their workers. I'm tired of it."

So for now the strike continues, picking up support, such as from Chicago teachers, recently on strike themselves. Many public-school teachers see a common enemy in the Walton Family Foundation, the charitable group run by Wal-Mart's founding family, which promotes school privatization.

And the warehouse strike is a worrisome development for Wal-Mart, a company that "has made distribution the heart of its business," as Nelson Lichtenstein writes in The Retail Revolution: How Wal-Mart Created a Brave New World of Business. Wal-Mart's super-efficient system of delivering goods only as needed, while stores carry minimal inventory, keeps costs low. It relies on sophisticated management and technology but also on brute, crude exploitation of workers. But this system is vulnerable to disruption, a threat especially potent now as big retailers prepare for the lucrative Christmas selling season.

Strikers at these two warehouses face both a big antagonist and big barriers to unionizing: Under current labor law, it's perfectly legal for Wal-Mart to simply stop using any contractor whose employees join a union. As a result, workers have instead focused on getting Wal-Mart to enforce its own standards upon its contractors. But the strikers' example could plant the idea in the minds of other warehouse workers that collective action can bring power and improvements at work. And that seed could grow into a movement for change among workers who need it badly.