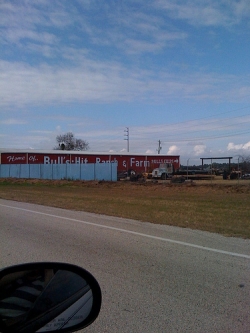 Bulls-Hit Ranch and Farm outside of Jacksonville, Fla., has been accused of abusing its seasonal farmworkers.   (Brianna Mewborn, Flickr, Creative Commons)

They called it “The Bullpen.” Farm workers were roped in from the street by recruiters and herded into the enclosed camp, where they worked during the day and slept in dirty, overcrowded bunks rife with bugs. Some, according to the workers' legal complaint, wrestled with grinding drug addictions and were sated periodically by dealers who would come by to sink them deeper into debt and dependency.

Though reminiscent of any chain gang from the old South, this labor camp was in modern-day Florida, and these human chattel were harvesting vegetables that might have nourished your family. Brought by the legal advocacy groups Farmworker Justice (FWJ) and Florida Legal Services, this landmark suit alleges a group of homeless men were taken from Jacksonville to the Bulls-Hit Ranch and Farm in nearby Hastings by recruiters, to work the yearly potato harvests in 2009 and 2010.

There, according to the suit, which recently reached a partial settlement, they were warehoused in squalor with inadequate food and filthy surroundings. Drugs from outside “were sold to workers on a daily basis, openly and in plain view of everyone at the camp.” The complaint charges that agent who recruited them, Ronald Uzzle, earned his keep by skimming their wages for housing and food from week to week. Bulls-Hit also served as their loan shark. Uzzle and another employee  known as "Too Tall" allegedly lent them money at “usurious interest rates of 100 percent.” Workers sank deeper into debt when dealers sold them drugs “on credit,” to be paid back when they could collect their wages later on.

Three named plaintiffs testified that they were regularly subject to intimidation by Uzzle and his associates at the camp, and under their watch, workers were made to fear violence as a consequence of not following orders.

The complaint charges that the operation violatied the Agricultural Worker Protection Act, minimum wage laws, and federal anti-human-trafficking laws--citing financial as well as psychological harm. The suit mirrors a similar case from 2004, which also involved the abuse of homeless workers.

A federal district court in Jacksonville certified the legal settlement targeting Bulls-Hit and its owner, Thomas Lee (litigation against the contractor will continue). According to FWJ, the settlement:

entitles the workers to back-pay for the duration of their employment at Bulls-Hit. Lee has also agreed to reform a number of employment practices, including paying workers directly rather than by channeling money through a contractor, and retaining only reputable licensed contractors.

Though the settlement does not include any word on guilt, it does allow workers to receive back pay and, more importantly, mandates steps for the main employer to improve labor practices going forward. Advocates hope the promised reforms may have a long-term effect on this notoriously exploitative sector by forcing companies to take greater responsibility for the treatment of seasonal or marginal workers.

At times, farm operators claim that they don't "employ" any of the farmworkers who harvest the crops on their farms, and that a labor contractor is the sole "employer" of the farmworkers. In this way, some farm operators hope to avoid the responsibilities that "employers" have to pay the minimum wage, provide safe working environments, offer workers' compensation insurance coverage, and negotiate in good faith with a labor union.

FWJ's Director of Litigation Weeun Wang tells Working In These Times via email, "An important objective of this settlement is to deny Bulls-Hit a means by which growers have traditionally used contractors as a shield. 'These are not our workers,' they say. 'We don't pay them. We pay the contractor and we don't see what's going on.'”

Though the Bulls-Hit settlement could bolster the push for employer accountability in farm labor, will other corporations, or the consumers who rely on this extremely vulnerable workforce, finally "see what’s going on?" The blatant exploitation of local homeless people has made the Bulls-Hit case particularly disturbing, but similar conditions are pervasive across the increasingly corporatized agricultural system. The Coalition of Immokalee Workers, which organizes tomato harvesters in Florida, has campaigned nationwide to force growers, upstream food retailers and consumers to recognize the scourge of slave-labor conditions on industrial farms, including not just poverty wages, but in some cases, beatings or holding workers captive.

This workforce is overwhelmingly Latino, many of them undocumented immigrants, some employed through sketchy guestworker programs facilitated by the federal government. Together, they are the definition of a precarious workforce, and all it takes is one crooked employer to turn grueling labor into true bondage.

Wang says this case shows the farm labor struggle is a human-rights issue:

The plaintiffs in this case are among the men and women who work hard to put food on our tables. Whether they are immigrants, working in the fields without documentation or under temporary guestworker visas, or whether they are recruited from inner cities like the plaintiffs in this case, farmworkers deserve to be treated properly. They deserve to be paid wages that are required under the law. They deserve dignity of work and respect by their employers. Regardless of where the workers come from in this country, there is sadly too much abuse of the workers in the field.

Just as no boss is above the law, no worker is beneath it, especially the worker who toils at the root of our food chain, outside our line of sight.