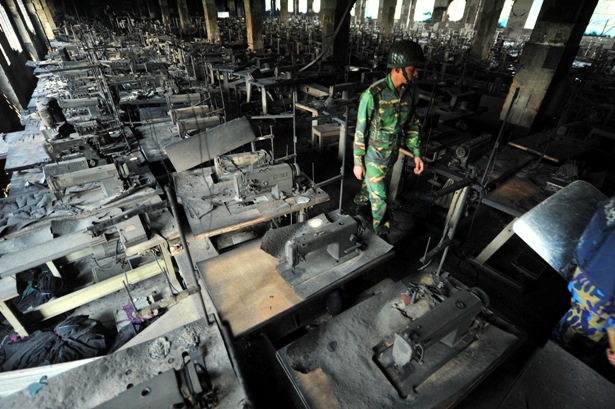 A Bangladeshi Army personnel walks through the rows of burnt sewing machines in the Tazreen factory, which caught fire Sunday, killing more than 110 workers.   (Stringer/AFP/Getty Images)

Perhaps the images no longer have the power to shock. Charred bodies and wailing families appear in the news with grim frequency, giving the numbing impression that industrial fires are simply a necessary toll for poor nations on the road to “development.” The latest factory inferno in South Asia should prompt us to ask why this keeps happening, but once again, challenges from local and international labor advocates are being dodged by the global apparel-manufacturing machine.

The fire this weekend at the Tazreen factory outside Dhaka, Bangladesh, which killed more than 110 of the 1,000-plus workers, bears the stamp of some of the world’s most iconic fashion labels. According to labor advocates, the Western brands linked to the factory included Disney, Sears, Dickies, Sean Combs's Enyce and Walmart's Faded Glory.

According to initial reports, the workplace was fraught with fire-safety issues, including the lack of a viable road for rescue workers to approach the facility and a lack of safety exits. Before workers could flee, some managers reportedly “stopped them running to safety after the fire alarm had gone off.”

Just about everyone who could be held responsible has a story to deflect the blame, and some are even implicating workers.

Amid international outcry and local street protests in response to the fire, Bangladeshi authorities suggested that the incident was not a product of an industrial accident such as faulty wiring, but sabotage, pointing to another investigation of fires reportedly started by workers in a nearby factory. (Notably, Bangladesh’s garment industry is a bulwark of the country’s low-wage economy, employing about 3 million people.) Prime Minister Sheikh Hasina argued the Tazreen fire also appears to be the result of arson, perhaps tied to local political conflicts—a claim echoed by the Bangladesh Garment Manufacturers and Exporters Association. According to Hasina, the disaster "was not an accident, (it was) planned. The incident takes place when it is the time for buyers to come and sign contracts."

Activists are wary that authorities are seeking a smokescreen to conceal deeper safety issues. Scott Nova of the anti-sweatshop group Worker Rights Consortium tells Working In These Times that the investigations should focus on "unsafe buildings" and workplace hazards underlying the tragedy:

This is a kind of political misdirection that we’ve seen before from the industry in Bangaldesh and its political allies. ... But because the Bangladesh government and industry cannot admit that workers are dying because of lax regulation and unsafe working conditions in the industry in Bangladesh, they need some kind of scapegoat. And so they make up stories about saboteurs and arsonists whose goal somehow is to destroy the Bangladesh apparel industry.

The debate over the origins of the fire misses systemic issues that were an open secret long before Tazreen burst into flames, according to the Associated Press: an egregious lack of protections that left workers unable to use fire extinguishers; workers locked tightly inside so that windows had to double as fire exits, with cell phone lights pointing the way. Nor does it account for why managers ordered workers to return to their work stations as the building blazed.

The website of the factory’s parent company suggests that it has been approved by the certification body Worldwide Responsible Accredited Production, but the organization insists it did not inspect the factory.

Liana Foxvog of the International Labor Rights Forum (ILRF) tells Working ITT via email that a full investigation should be conducted, but that some facts are already certain:

Putting aside the question of the cause of the fire, it is evident from worker reports that Tazreen Fashions failed to uphold fire safety precautions and the magnitude of the tragedy would have been far less would have been far less had the brands paid fair prices to help ensure building compliance with fire-safety code and required sufficient, accessible exits and adequate emergency evacuation training. … All told, the situation amounted to a death trap when fire erupted.

Yet the safety violations are mere symptoms of the deep lack of accountability ingrained in the structure of the global apparel supply chain. The incident has shed light on the murky connections among various buyers and brands from Hong Kong to the United States, and it exposes the ease with which multinationals have been able to duck responsibility for labor- and human-rights violations by diffusing the manufacturing process across various countries.

Walmart claims to have been unaware that its clothes were still produced in Tazreen, saying that it had previously cut off business with the factory and it was not an unauthorized producer. But the main evidence that has emerged to support this claim is an internal “ethical sourcing” audit from mid-2011, posted online, which indicates that “high risk” conditions or violations had earned the factory a probationary “orange” assessment. The factory was warned it could be dropped if it got three such ratings over a two-year period. The ultimate outcome of Tazreen audit is unclear, but in any case, the standard procedure for dropping an unscrupulous supplier might apparently last as long as two years—far too long for workers who risk their lives every workday.

In response to Walmart’s claim that Tazreen was dropped before the fire, Nova of the Worker Rights Consortium says, “Unless Walmart is willing to supply proof of that, I don’t see why anyone should believe it. And even if they can prove it, it doesn’t change the fact that they allowed their stuff to be made there, whether by omission or commission, and are responsible for protecting those workers.”

The deaths of the garment workers are the by-products of a rapid-fire manufacturing system that drives the fashion cycle and mass-produced inventories of Walmart and other chains. The production patterns that run on poverty wages and brutal work conditions in the Global South parallel exploitation at the upper end of the supply chain, resulting in low wages and precarious temporary work in Western warehouses and retail stores. In this way, the Black Friday Walmart protests throughout the U.S. and the Tazreen fire protests in the streets of Bangladesh are converging in a single labor struggle to hold global brands accountable.

Labor activists in Bangladesh have routinely been attacked and suppressed for challenging exploitative employers and calling attention to the country’s fatal dependence on cheap garment exports. Earlier this year, labor organizer Aminul Islam was found tortured and killed, and the case remains unresolved.

In the wake of industrial disasters, advocacy groups like the ILRF have made some strides in shaming companies into tightening standards. Uproar over a recent high-profile factory fire in Ashulia, Bangladesh spurred Tommy Hilfiger to initiate a safety reform program. But despite defiant grassroots protests, workers in Bangladesh lack a strong labor movement that could mobilize to protect them and advocate for better conditions before, not after, the next tragedy.

Incidents such as the Tazreen fire and an even more deadly blaze in Pakistan this September draw comparisons to the Triangle fire of the early 20th century in Manhattan, which led to public horror at the brutal deaths of young workers. But while the Triangle Fire lit the spark for significant labor reforms in the United States, no one knows how many more South Asian workers will perish until the lessons are learned. Of course, corporations have learned carefully over the years how to atomize the supply chain to minimize liability. They're working hard to ensure that Triangle’s lessons for the labor struggle, of the need to empower workers to protect themselves, are quietly forgotten.