The Young and the Disconnected 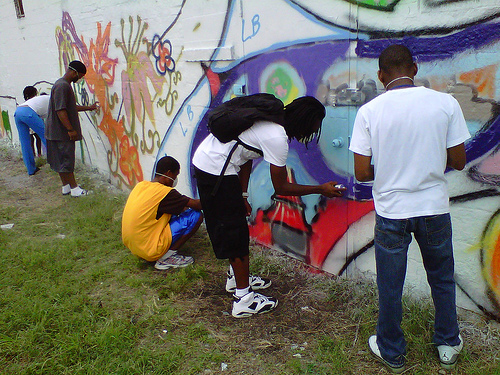 Young artists work with Beacon House and DC Summer Youth Employment Program to paint a mural. Such programs help fight youth disconnection and the unemployment that is correlated with it--but they are scattered and underfunded. (Rails to Trail Conservancy / Flickr / Creative Commons).

A first paycheck has traditionally been seen as a rite of passage, but these days, that paycheck is often coming later and later. Rather than launching a career, young adulthood is becoming, for many, a springboard to a lifetime of hardship, debt and instability.

According to a sobering new study by the Annie E. Casey Foundation (AECF), “More youth than ever—2.2 million teenagers and 4.3 million young adults ages 20 to 24—are neither in school nor working.... It often takes a GED to get a job flipping hamburgers. Even some with college degrees are having trouble finding work.”

And joblessness itself, AECF warns, can set back youth in the long term.

Though mass unemployment hits older workers hard, the scourge of joblessness among youth affects the future in ways that concern advocates, who predict that youth are being tracked toward chronic economic insecurity. Getting early work experience can jumpstart youth on a career path, or at least confer viable job skills that make them more economically resilient in adulthood. Conversely, as the AECF report suggests, missed opportunities early in life can deprive youth of long-term dividends:

At this rate, a generation will grow up with little early work experience, missing the chance to build knowledge and the job-readiness skills that come from holding part-time and starter jobs.

The huge numbers of young people who are shut out of those opportunities are typically up against other challenges. Youth “disconnection”—detachment from work and school—is often associated with setbacks such as poverty and household social stress. Disconnected youth are disproportionately black and Latino, concentrated in impoverished households, and more likely to have children themselves. A study published in September by Measure of America shows that youth disconnection follows socioeeconomic divisions between neighborhoods. In New York, “disconnection rates range from 3.7 percent in parts of Long Island to 35.6 percent in parts of the South Bronx."

Catherine Ruetschlin, an analyst with the think tank Demos, tells Working In These Times via email, "Disconnection is one aspect of that inequality that appears as low income households take home a smaller and smaller share of our total product, have less access to opportunities for school or work, and are not supported by an adequate social safety net."

As youth disconnection intensifies, then, so will race and class inequalities. The Pew Research Center’s analysis of social mobility trends suggests that many youth, especially black youth, carry the economic burdens their families have suffered into adulthood. Contrary to the traditional “bootstraps” narrative, this is a long-term, racially stratified pattern, not just a product of the recession (though its social effects may become more pronounced amid an economic downturn). The drift of low-income youth away from both education and work suggests that traditional institutions for "moving up the ladder" are failing them.

Elite education reformers talk breathlessly about making American students “globally competitive” again, yet policymakers don't seem to recognize how to support the youth who are most at risk: through community-based programs that connect kids to educational and social supports that treat them as assets, rather than social liabilities.

The AECF report highlights initiatives that do just this, providing the intensive guidance that can give disconnected youth an anchor. In one youth center, advisers personally direct students through GED classes into community college and then into paid internships, so they have continual support as they enter the workforce.

Maybe what’s surprising is that many disconnected young people aren’t completely disillusioned by the barriers they face. A recent report, published by the Center for Law and Social Policy (CLASP), on a federally sponsored youth employment initiative found that disconnected young people were eager to “connect”—through education, training, or some combination—if they had a program helping them chart a path forward. The initiative engaged more than 90,000 young people and improved overall educational attainment and employment rates among “blacks, teens, out-of-school youth.” Still, the sponsoring grant, though it was intended to be the start of a much larger project, ended up being limited and temporary, focusing on just 36 communities.

So it has gone for countless community-based programs that work to link disadvantaged youth to jobs, education and often, civic and community activism. Those initiatives will remain small-scale and unstable unless they receive comprehensive, sustained support from funders or public agencies.

Linda Harris, CLASP’s Director of Youth Policy and the report's author, tells Working In These Times, "The resolution to this, given the scale [of the problem], can't be a program here and there. It really has to be some of the more systemic interventions” that draw upon "public systems, communities and the private sector" to generate opportunities. Moreover, the recession my have for now exacerbated structural barriers, but they persist even during relatively good times. In communities plagued by something like a permanent recession, Harris says, “unless we make the kinds of investments that are targeted at getting more of the young people who are disconnected from the workforce, they will not be better off when the economy is better off.”

Young people’s disconnection no accident. For youth at the bottom—actively neglected by an exploitative economic structure and an inhumane political establishment—the connection is broken by design. The real fix comes through programs focused on inclusion and empowerment. Whether they're seeking jobs or a diploma or just meaningful relationships with peers and family, kids will connect to their communities when they feel they have a real stake in them.