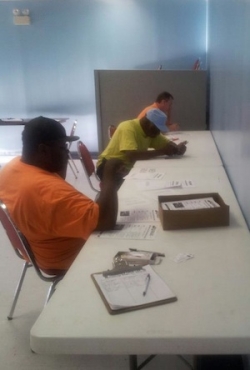 Port truck drivers phone-bank for a June 1 forum in Savannah on 'Making the Port Work for Us.' (Photo from Stand Up for Savannah.)

The port of Savannah, Georgia generates some $14.9 billion in income each year. The goods that flow through it are distributed throughout the South—including to a massive Wal-Mart distribution center in the nearby city of Statesboro. Savannah is now the country's fourth largest container port, and the fastest growing. Traffic at the port went up 11 percent between 2008 and 2012 even as the rest of the country suffered through recession.

The wealth generated at the port, though, hasn't trickled down. While Wal-Mart and other retailers are doing just fine, the products they sell are transported by port truck drivers who still make low wages—a nationwide average of about $12 an hour. Since the industry was deregulated in the late 1970s, port truck drivers have been classified by their employers as “independent contractors,” meaning that they're paid by the load, not by the hour, and the bosses don't shell out for taxes or benefits.

“We need benefits, we need retirement just like everybody in the office does,” says port truck driver John Jackson, part of the Savannah Port Drivers Organizing Committee. “We're doing all the work and they're getting the gravy, in a sense. They're getting a salary, they don't have to pay out of their salary to try to keep equipment up.”

The workers have to pay for and maintain their own trucks, effectively forcing them to pay to work. Because of that, and because the workers are mostly black, a 2010 report [PDF] from the National Employment Law Project and the labor federation Change to Win calls the situation of the truckers “sharecropping on wheels.” Some of them are forced to lease trucks from the companies they work for, meaning that they're literally paying their bosses to be able to do their jobs. The report estimates that these costs can run up to 60 percent of the drivers' income.

“By the time we've taken out for fuel, insurances, our cell phones that we have to have at the companies that we're with, by the time we get all those deductions, then it's time to pay bills, we're down to nothing,” says port truck driver Carol Cauley, another member of the organizing committee. “We kind of have to choose bills or family.”

Lewis Grant, also a driver and committee member, adds, “With funds being low there's some tough decisions that I have to make on a weekly basis. Do I buy new tires for my truck or do I put food in the refrigerator? Do I send my kids to day care this week?”

Across industries, classifying workers as independent contractors is a common way for employers to evade the costs and responsibilities of employment. Wade Henderson, president and CEO of the Leadership Conference on Civil and Human Rights, in the foreword to the report, writes, “Millions of employees are misclassified by their employers as independent contractors, often as an excuse to cut costs and avoid paying taxes. Thus disguised, these employees become workers who fall outside the protection of most labor and employment laws that our civil rights and labor law communities have fought so hard to secure.”

The report looks at three different legal frameworks for classifying workers as employees and concludes that the majority of port truck drivers are employees, not independent entrepreneurs. It found that the companies that employ the drivers exert significant controls over their behavior, including drug testing, setting schedules, and dispatching workers to do jobs. Drivers in the Savannah organizing committee tell stories of having fees deducted from their checks for tire replacement and being required to pay for company cell phones. They're restricted to one company at a time, without the ability to make extra money on the side.

Independent contractors also don't have the right to form a union, leaving the port truckers without an official voice. Meanwhile, the companies for which they work face continuing pressure from big-box retailers like Wal-Mart to lower their costs—pressure which results, inevitably, in the workers being squeezed, with no real power to resist.

The drivers in Savannah are coming together to challenge their misclassification, but also to try to find a way to organize now, whether or not they are classified as employees. The question is, “How can workers excluded, not just organize as a lobbying force, but begin to engage in forms of collective action?” asks Ben Speight, an organizer with Teamsters Local 728 in Georgia. The work done by Seattle-area taxicab drivers, for instance, who associated with Teamsters Local 117, is a possible example for these port drivers.

The South presents unique challenges to organizing, certainly—Georgia has long been a so-called “right-to-work” state, and unions have almost no foothold there. But the ports serve as an integral part of the global supply chain and thus present an opportunity for the workers to exercise some power. Federal money has been authorized for the dredging of the Savannah River to deepen the port (and to mitigate environmental consequences from the dredging), meaning that there will be a lot of focus on Savannah in the coming years.

On June 1, the Savannah drivers will hold a community/driver forum with Larry Benjamin of the U.S. Department of Labor's wage and hour division, as well as faith and community leaders, and elected officials from the state legislature and Savannah City Council. The coalition hosting the event calls itself “Stand Up for Savannah,” and it's looking beyond just the issue of driver misclassification to discuss ways in which the newfound wealth at the port could benefit everyone.

Included in the discussion, along with the wages and conditions of the drivers, will be the question of the condition of the trucks. Because the drivers have to pay to maintain their own vehicles, the ports are full of old, crumbling diesel trucks, literally held together in some cases with duct tape and bungee cords. “You're forced to drive these containers with these split tires down the highway,” says driver Jim Myrick.  “When a tire has a failure, the driver's responsible for the tire. You have to call road service, you may be on the side of the road for three to four hours waiting on the tire guy to come. The tire may cost more than you may even make off the run; in most cases it does.”

Those trucks are a source of pollution that leaves the surrounding community struggling with asthma, to say nothing of the effects on the drivers who breathe fumes all day. Driver Jimmy Romero explains, “You idle a lot because it takes so long for you to get in and out of the port. You don't have AC, so [with the windows down] all the smoke is coming into your truck, and you're throwing that in the environment so everyone who lives near the port is getting all that smoke.” Bringing community members together with the truckers to discuss the impact of the pollution on them all will be part of the conversation.

“This actually is a campaign for organizing industry-wide.  These workers don't identify themselves as being part of a contractor, they identify themselves as a class, they see themselves as an industry,” Speight says. Like workers across the country these days, suffering from various versions of what my colleague Josh Eidelson calls the “Who's the Boss” problem, the port truck drivers can either wait for the question of who really employs them to be answered, or they can reach out to community allies and to one another and figure out how to organize outside of traditional union frameworks.

The Savannah drivers, at least, are going for the latter.

Watch the truckers tell their stories: