Unions Under Siege in Guatemala 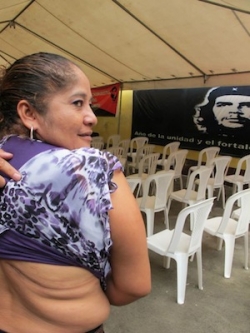 Melvy Lizeth Camey Rojas, Secretary General of the SNTSG Santa Rosa Dept, shows the scars of the bullet wounds she suffered in an assassination attempt in August 2012 at her union office. (Photo from Public Services International)

Guatemala is beginning to emerge from a grim history of military dictatorship and civil strife, but its workers remain mired in the nation's bloody legacy. Even today, as the country hobbles toward democracy and seeks justice for past atrocities, trade unionists are still a target of violence, with many killings hidden under a cloud of government impunity.

In 2011 and 2012, there were a string of murders of members of the banana workers union, SITRABI. Overall, 64 trade unionists have been murdered in Guatemala since 2007 and hundreds have been systematically terrorized. And the vast majority of such crimes are never prosecuted, let alone punished. Activists believe that unionists are targeted because they represent workers' interests, which puts them this puts them at odds with powerful corporate and state institutions.

Following negotiations with the International Labour Organization and International Trade Union Confederation, the Guatemalan government reached an agreement earlier this year to cooperate with ILO monitors to address anti-union violence and strengthen labor protections. But the bloodshed has not let up.

In March 2013, three members of PSI affiliate unions were murdered just days after an ILO mission visited Guatemala to assess the situation of freedom of association. On March 8, 2013, Carlos Hernandez, executive member of the Sindicato Nacional de Trabajadores de Salud de Guatemala (SNTSG) and leader in several peasant organizations, was shot dead by two men carrying 9mm firearms on motorcycles. Santa Alvarado, also a member of the SNTSG, was kidnapped on March 21 after finishing work in the kitchens at the national hospital in Totonicapán. She was later found strangled. Kira Zulueta Enriquez Mena, General Secretary of the Sindicato de Trabajadores Municipales de Nueva Concepción in the department of Escuintla, was assassinated on March 22 at the library where she worked.

While the culprits may be hidden, unionists say these are not singular incidents of criminality. Labor advocates see the killings as a byproduct of deep government corruption linked to both drug trafficking and the business world. The unions' position as workers' representatives, they say, makes them a threat to corrupt enterprises and officials, leaving them exposed to killings by hired criminals.

Speaking to In These Times through an interpreter, Luis Antonio Alpirez Guzmán, secretary of dispute resolution with the health worker' union SNTSG, which has reported several members assassinated in recent years, says local activists believe government officials “are not ordering the assassinations, but they are not doing anything to avoid them. And they are not taking proper action to investigate these assassinations. Therefore the government is considered an accomplice.”

Local and international labor groups are some of the few civil society voices mobilizing to demand action amidst the official silence. Last week, an international delegation of labor activists traveled to Guatemala to demand full investigations of recent murders of trade unionists and pressure the Guatemalan government to prosecute the crimes. The delegation was coordinated by PSI and included representatives from affiliate unions in Europe, Latin America and the United States. PSI General Secretary Rosa Pavenelli says via email that a "historical anti-union feeling" is "present in some sectors of the government as well. As such, a climate of impunity and fear exists."

The PSI delegation has called on Guatemala’s wealthy trade partners to suspend commercial ties in response to the human rights crisis. In particular, they want European governments to suspend a key program that facilitates trade between the two regions, the European Union Central American Association Agreement (EU-CAAA), which gives trade preferences to Guatemalan businesses.

International trade deals are often promoted as a way to improve economic and social stability. The DR-CAFTA, a trade deal aimed at promoting regional economic "integration," includes a Labor Chapter that supposedly grants abused workers a means of legal redress. In 2008, several Guatemalan labor unions worked with the AFL-CIO to file complaints under the Labor Chapter. The U.S. agreed to act as an arbiter to address the complaints. But according to PSI's analysis of the negotiations, “the government of Guatemala refused to participate in arbitration and raised claims of procedural errors.” The U.S. has since worked out an enforcement plan with the government, and implementation is expected in the coming months.

But if past is prologue, activists are right to be skeptical that outside pressure will lead to domestic accoutability. Trade deals have historically proven more of an impediment to progress than an impetus. In several neoliberal accords brokered by Washington, such as trade pacts with Mexico, Jordan, and Colombia, labor groups have criticized the labor provisions as toothless and, in light of the persistence of rights abuses under "free trade," too weak to encourage real reform or raise standards. Guatemala has evolved over the past century from a colonial outpost to a proxy battleground for Cold War power struggles, with a military dictatorship tutored and supplied by Washington. The social upheavals of earlier generations left government institutions and civil society deeply damaged. The country is just now embarking on a process of justice and reconciliation for victims (though the  U.S. government's role in past atrocities still awaits a full public airing).

Yet the persistence of anti-trade union violence suggests that, whoever is directly responsible for the killings, the state and economy still actively benefit from the disenfranchisement of workers and civil society. Murder is just one extreme example of the country’s many labor crises. Human rights observers and local and international labor groups have extensively documented issues of exploitative working conditions, child labor, gender discrimination and union-busting campaigns.

In addition to demanding accountability for anti-union violence, PSI has also urged strengthening of collective bargaining processes and other labor regulations, particularly for public sector workers, whose rights are threatened by corruption and a trend of privatizating government services. And for all of Guatemala’s workers, who suffer from intense poverty and mostly work in the informal sector, the international union delegation criticized “the widespread use of outsourcing and short-term contracts,” which exacerbate economic instability and “lead to further inequalities in the workplace and in society.”

To solidify international action on labor strife in Guatemala, the SNTSG has called for a labor rights observatory, building on ILO initiatives to provide sustained investigations and on-the-ground monitoring of anti-worker violence and repression.

Alvirez warned that if the bloodshed continues, the entire labor movement will be irrevocably weakened. “Whenever a trade union leader is killed it has a big impact on the union,” he says, “because it creates instability."

"And unions, whenever they lose one or two members, of course have to focus attention and their time and energy on helping family of this persons who have been killed, on immediate issues, instead of continuing with their fight,” he explains. The situation is reminiscent of the chaotic 1980s and 1990s era, when student and labor activists were murdered on a mass scale, he says. “It was a very, very violent time... And we have the impression that we are going back to this period, and that the government wants to shut us off."