How Sandy Clean-Up Brought Day Laborers Out of the Shadows 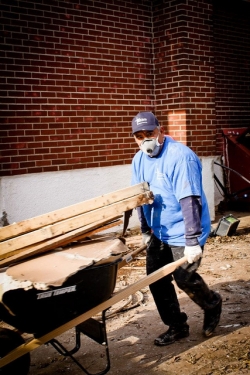 In the flood of manual labor jobs after Sandy, workers were put to work in hazardous environments with little protection, says a new report.   (El Centro de Immigrante)

When Sandy hit last October, the Northeast shoreline seemed to freeze: people were stranded in flooded homes, businesses shuttered, downtown Manhattan's lights went eerily dark. But the paralysis wasn't total—the area began buzzing immediately with invisible workers. The day after Sandy was just another day of honest work for the "casual" manual laborers who would spent months cleaning, gutting and rebuilding homes and businesses across the stricken area, often in grueling conditions with little protection from collapsing walls, toxic mold and other hazards.

A study published late last month by researchers with the City University of New York's Baruch College reports that after Sandy, many of these day laborers—a workforce that is typically dominated by Latino immigrants and considered a "casual" or irregular part of the construction trade—were unnecessarily put in harm’s way amidst the haphazard recovery process.

Based on interviews with workers and advocacy groups in New York and surrounding areas, the researchers found that while demand for day laborers spiked post-Sandy, working conditions sank even lower than usual. Flooded areas were quickly awash in contractors and desperate homeowners seeking quick, cheap labor to fix their property damage, which led to a perfect storm of risks, ranging from injuries and toxic exposures to wage theft by crooked subcontractors.

The researchers note that many day labor sites belied major safety threats, such as “industrial cleanups involving warehouses that stored pharmaceuticals and in hospitals.” And in many cases, homeowners who informally hired day laborers for immediate clean-up did not understand the complex hazards involved with clean-up, demolition and rebuilding, leaving workers even more vulnerable.

Report co-author Hector Cordero-Guzman says that although everyday conditions are harsh for day laborers, following a natural disaster on the scale of Sandy, the work becomes more hazardous:

There's more potential exposure to toxics, contaminated air and water, all kinds of particles, potential for electrical shocks because of wires [and other dangerous] damage that is not particularly obvious to the eye … which means that they need to have training, to have the right equipment, to have the right set of resources and infrastructure to support that work.

More formalized union construction workers tend to be equipped with gear, safety training and healthcare coverage. But there are generally fewer protections for low-wage day laborers, by virtue of the precarious labor structure that keeps them in the lowest rungs of the trade--short-term, less stable work. And when injuries occur, workers tend to avoid seeking treatment, perhaps wary of a healthcare system that could lead to high costs or run-ins with immigration authorities.

For manual laborers, there were a few bright spots in Sandy’s wake. Despite the heavy risks, the post-storm employment prospects were, to many impoverished workers, a welcome uptick in labor demand. The surge in employment in turn highlighted the presence of local worker centers—broadly defined as community-based labor and social-service groups for workers—available to protect workers from exploitation and injury. Just as many grassroots post-Sandy volunteer efforts stepped in to fill gaps in the official disaster response, worker centers like the Brooklyn-based Workers Justice Project and Staten Island’s El Centro del Inmigrante, along with the advocacy organization National Day Laborer Organizing Network, offered safety and know-your-rights trainings, with support from city and federal labor authorities. Many workers relied on these centers, according to the report, as a “primary and often only source of trainings, as employers almost never provided any protective equipment or information on how to protect workers, but focused exclusively on explaining the particular job they wanted the worker to do.”

The workers centers also run hiring halls, as an alternative to the typical method of picking up a job by waiting for prospective employers to drive by a designated street spot. The hiring hall model allows workers to gather indoors and more formally negotiate job terms, and helps workers organize with each other as well.

In addition to connecting workers with advocates, Sandy bred solidarity between labor and volunteers, as workers, many of whom were affected personally by the disaster, aided with “free” relief efforts. As one interviewee explained, participating in volunteer relief helped "to make ourselves known as the first groups of workers that were willing to help after Sandy; to make ourselves more visible and gain a good reputation." So workers came to be seen as genuinely invested in the community's recovery, rather than outsiders looking for work.

The main lesson of Sandy, researchers argue, is that both workers and the government benefit when there is greater inclusion of the day labor sector in disaster preparedness plans. And it’s critical for federal, city and state authorities to keep up that engagement of day laborers year-round to prevent day-to-day exploitation on worksites. One way to start would be to support the worker centers, which the researchers say are mostly still too small and underfunded to meet the sector’s needs for comprehensive labor protections.

Although Sandy may have prompted the government to reach out to day laborers, Cordero-Guzman stresses that emergency relief efforts in many cases lead employers and regulators to allow bosses to cut corners, or to ease up on labor regulatory enforcement to “cut red tape” and speed rebuilding efforts (as when the wage regulations were temporarily suspended in the Hurricane Katrina recovery effort). He says:

In the end, what we may be saying is, well let's suspend labor regulations and labor laws because it's a time of crisis so that more of these poor disposable immigrant workers can be paid less and be exposed to potential health issues that we may have to live our entire lives with, for basically $100…. I don't buy that, I think we're better than that. That's why we have a government and that's why we have disaster relief agencies.

Day laborers are often seen as liminal, transient workers, toiling outside of public view. But Sandy showed how closely connected they are with the fate of the communities they serve. Now, in the narrow gap between the wake of the last storm and the onslaught of the next calamity, day laborers are in danger of being forgotten again by the neighborhoods that they risked everything to help rebuild.