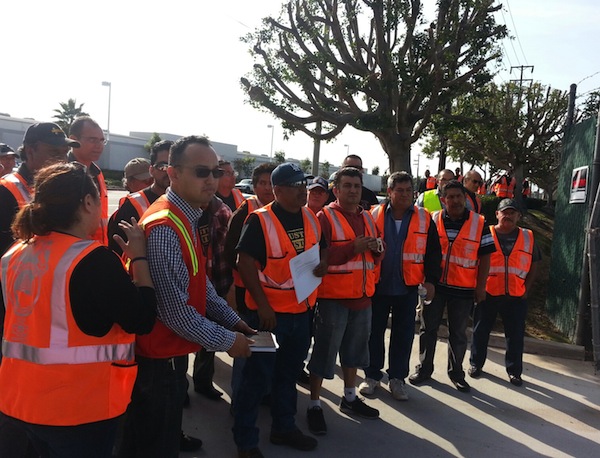 “We are on strike today to have respect and dignity at work,” says Walter Melendez, one of approximately 40 Los Angeles port truck drivers who walked off the job at 5a.m. morning in protest of alleged unfair labor practices. The strikes featured the rolling “ambulatory pickets” that the truckers have excelled at—chasing down trucks as they leave the port and setting up picket lines in front of them.

Melendez works for California's Green Fleet Systems, a company that moves freight from the ports of Los Angeles and Long Beach to nearby distribution hubs. The drivers have filed a complaint with the National Labor Relations Board charging that the company retaliated against them for pushing forward with a drive to join the International Brotherhood of Teamsters.

The push continues even as, according to Melendez, the company does its best to intimidate workers: pulling them into one-on-one meetings to dissuade them from unionizing, and even following and photographing them engaging in organizing activities outside work. Melendez believes that more Green Fleet drivers would have joined the strike this morning, had they not been deterred by these tactics.

In total, some 100 port truckers from three different companies—Green Fleet, American Logistics International and Pacific 9 Transportation—walked off the job today in a coordinated effort to raise working standards. Unlike the truckers at Green Fleet, who are employees, the workers from Pacific 9 Transportation are considered independent contractors. They argue that this is an illegal misclassification because they have none of the benefits of real independence—such as being able to set one's own hours or work for different companies. Meanwhile, their bosses deduct operating costs from their paychecks, something that would be illegal if they were indeed employees. More than 50 Pacific 9 drivers have filed claims with the California Labor Commissioner alleging that this practice has robbed them of more than $7 million in wages. According to the labor federation Change to Win (which is backing much of the port trucker organizing), hundreds of similar claims filed in recent years by port truck drivers have all resulted in “substantial penalties” for the employer.

“They've taken from us everything that a human being needs to have a decent life,” says Daniel Linares, who's worked for Pacific 9 for seven years as a so-called independent contractor.

Linares says that he and his colleagues marched to Pacific 9 management offices today and attempted to deliver a letter collectively explaining why they were on strike, but no one would come out to meet them. Eventually, Linares says, one worker was allowed to go inside to deliver the letter.

Los Angeles is not the only port where drivers are speaking out. Militancy has increased in recent months among port drivers around the country, whether classified as employees or independent contracters. Last month, a self-organized coalition of port truckers held a wildcat strike to protest the costs of new environmental regulations for the Port of Oakland being dumped entirely on their shoulders. Savannah, Ga., port truckers recently crashed a City Council meeting to ask for the city government's support for their efforts to improve their jobs, and last summer, drivers at ports in New York and New Jersey became the latest port truckers to join the Teamsters.

As I wrote this summer, a report from the National Employment Law Project and Change to Win likened the situation of the independent contractor drivers to “sharecropping on wheels,” because the drivers have to pay for their own trucks and maintenance costs. In return, they are paid only by the load—meaning that time that they spend sitting in line at the port awaiting another load, breathing the fumes from their own trucks, is time unpaid.

Paula Winicki, a research and policy analyst for the Los Angeles Alliance for a New Economy, breaks down the costs that Pacific 9 deducted from a single contractor’s paycheck: $125 a week for the lease of the truck, $530.05 in fuel, $50 for repairs, other miscellaneous deductions for parking, insurance, permit and license fees, and more, that with fuel, repairs and lease add up to $962.90. The paycheck for one week after the deductions was $12.90. Winicki notes that these issues are endemic to port trucking companies, so leaving wouldn't help much. And in any case, once they sign a long-term lease for a truck with Pacific 9 or another company , “They’re tied to the company. … If they walk away, they lose a truck— and maybe get sued for breaking the lease agreement.”

Even the Green Fleet workers, who are actual employees, face the problem of piecework at the ports. Says Melendez, “When we started they told us [we'd get paid] by the hour, and then when we started working they're like, 'We pay you guys by the truckload.' It's like they pay us how they want to pay us.”

That means constant pressure to work harder and for longer hours. One of the things Melendez wants to change is the 12-hour shifts he's pulling. “After ten hours you get tired working in the trucks, our bodies and our eyes and everything get tired, they don't understand us, they say 'Keep going, keep going.' ”

A 2009 study [PDF] from nonpartisan think tank Demos, authored by David Bensman, Professor of Labor Studies and Employer Relations at Rutgers University, looked at the roots of the crisis in port trucking: the Federal Motor Carrier Act of 1980. This piece of deregulatory legislation shifted costs onto workers and, Bensman argues, the public, leaving taxpayers to pay for increased pollution, at risk of traffic accidents caused by unsafe trucks, and picking up the health bills of workers who have no health insurance. Goods for companies like Walmart, Forever 21 and Skechers shoes are made cheaply overseas thanks to low-wage labor and then moved cheaply through the ports thanks to drivers shouldering much of the costs.

Bensman says that the way deregulation ”destroyed” the port trucking industry “speaks volumes about the neoliberal labor markets of our time.” He concludes:

The deregulation of the port trucking industry, which began in 1980, has achieved some of its goals of increasing competition and driving down freight rates, but the public cost of this success is now clear: Ports compete for business by abdicating responsibility for air quality, chassis and container safety, and labor standards. Logistics firms benefit directly from lower freight rates, but suffer indirectly from a broken, unreliable, inefficient drayage system, which cannot share business information in a transparent and timely manner.

Drivers like Melendez would love to have safer, cleaner trucks to drive, but when the cost of updating the trucks comes out of their wages, they have to choose between breathing and eating. This is a problem around the country—drivers in Savannah made the same complaints, as I reported before.

In other words, the workers aren't the enemy when it comes to dirty air around the ports—they're victims of a thankless system. The Coalition for Clean and Safe Ports aims to take into consideration the workers' issues alongside the environmental impact of the trucks—an impact that is usually felt in low-income communities that are nearest the ports—and includes labor groups such as the Teamsters and Change to Win as well as community organizations such as Asian Communities for Reproductive Justice and Physicians for Social Responsibility.

The support of community groups is key for short-term strikes by non-union workers, a tactic that has grown in popularity since Wal-Mart and fast-food workers took to it over the past year. Without a union contract, the best protection workers have against increased retaliation by the bosses is the watchful eyes of supporters who show up to join the picket lines and then walk them back to work the next day.

And as workers from different companies strike together in coordinated fashion, they multiply the impact they can have on their whole industry. “The companies are a little scared because it's not [only] Pac 9, in the area, that is getting organized,” Linares says. “This is a general movement now.”