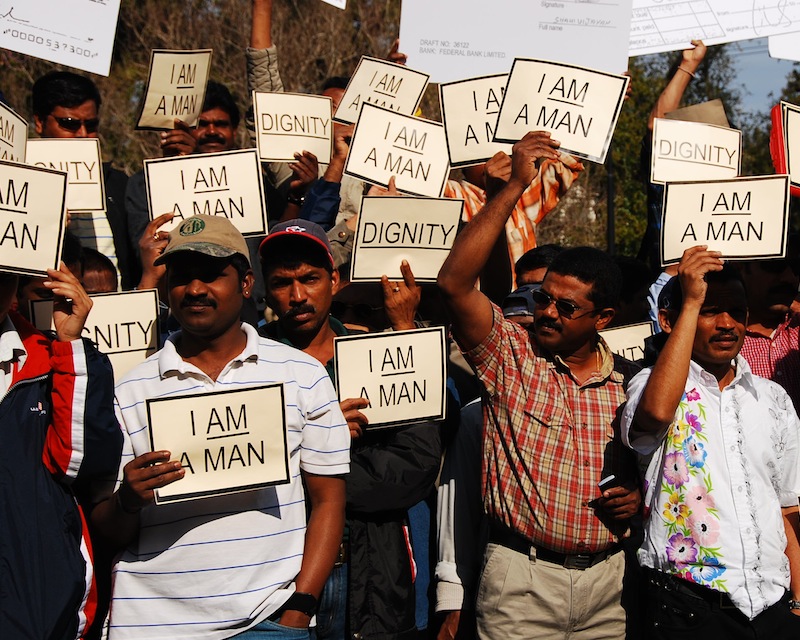 The appellate court's unanimous decision in favor of the Labor Department is a significant victory for guest workers, helping protect them from employer exploitation and labor abuses. (National Guestworker Alliance)

Each year, tens of thousands of immigrant “guestworkers” come to the United States on special employer-sponsored visas to work temporary jobs in landscaping, hotel housekeeping and other low-wage sectors. But for decades, these workers have been demonized and scapegoated, accused of hurting "native" U.S. workers by driving down wages. At the same time, the immigrants themselves have spoken out about their poor wages and working conditions, and have even gone on strike and organized independent labor movements to demand the same rights and wages as that of their American counterparts. It seems the only people who like this system, in fact, are the bosses who rely on a surplus army of imported temporary labor, denied the labor protections and legal rights of citizens.

In 2011, the Department of Labor (DOL) issued major reforms to a flagship guestworker program known as H-2B, which funnels tens of thousands of migrants annually into low-wage jobs in workplaces from Florida hotel chains to crabmeat canneries. Business groups, predictably, sued to block the regulations—but last week, an appeals court finally put their arguments to rest.

The reforms, which the DOL based upon an assessment of wage rates and labor market conditions for U.S. workers, mandate pay high enough to maintain prevailing wages in sectors that recruit guestworkers, and thus sustain current working conditions. The wage rules are part of a package of guestworker program reforms proposed by the DOL, that has long been stalled by Congress and court challenges but, with this court victory, can finally be implemented.

In Louisiana Forestry Association v. Secretary, U.S. Department of Labor, business associations representing the forestry, seafood processing and hotel industries, among others, argued that the Labor Department lacked the legal authority to impose the reforms and was impinging upon employers’ control over wages.

However, Meredith Stewart, an attorney with the Southern Poverty Law Center (SPLC), which represented the workers' groups that joined the Labor Department in fighting the suit in court, points out that employers supported the previous, laxer regulations that made it easy to pay substandard wages. “It really wasn't until the Department of Labor issued a wage rule that would lead to substantial increases for workers that employers decided to challenge their authority to issue any regulations for the program,” she tells Working In These Times. The new rules, she says, simply mandate that “to the extent that employers are going to employ foreign workers, those foreign workers and U.S. workers need to be treated equally and fairly.”

In court, the Labor Department and workers' advocates cited the agency's legal mandate, which explicitly directs regulators to protect workers from wage suppression and displacement by unscrupulous bosses. On February 4, the Third Circuit Appeals Court unanimously agreed that the Labor Department had the authority to make the reforms, rejecting the employers’ arguments.

While the pending regulations would hardly be a comprehensive overhaul, they strengthen the meager existing H-2B protections by barring employers from paying H-2B workers so little as to undercut existing wage levels for non-visa workers who do “substantially the same work.” Essentially, the prevailing wage standard, set according to the Labor Department's economic assessments, aims to preserve working conditions in a given sector by preventing employers from manipulating immigrants to cheapen labor costs. It also would block employers from unfairly cutting hours and from deducting transportation or equipment costs from workers’ pay. Employers would be required to disclose more information up front in the recruitment and hiring process, about job requirements and workers’ legal rights. The regulations also help shield workers from discrimination if they complain about mistreatment—a critical protection because they depend on their employer’s sponsorship for their U.S. visa authorization and are thus easily coerced into silence.

Most controversy over guestworkers stems from the popular misconception that immigrants are to blame for supposedly “stealing” jobs. In fact, migrants often work jobs that complement, rather than displace, the employment of U.S. workers. But even in the labor markets where the importation of guestworkers has resulted in declining labor conditions, the process is driven primarily by the labor abuses and rampant exploitation of employers—thus all workers, native and immigrant, documented and undocumented, have an interest in equalizing labor rights across the board, to resist attempts by corporations to divide and exploit the workforce with impunity. To that end, the grassroots labor organizing among guestworkers highlights a shared labor struggle in a system that robs U.S. and immigrant workers alike of dignity. Several labor scandals, such as the recent case of seafood processing workers in the massive supply chain of Wal-Mart, have shed light on the common practice of underpaying H-2B immigrants. In a 2012 report by the National Guestworker Alliance (NGA) on abuses in guestworker programs, NGA co-founder Daniel Castellanos-Contreras recalled his experience of exploitation as an H-2B worker in the aftermath of Hurricane Katrina, lured to the U.S. from his native Peru on the promise of a decent hotel-industry job.

Instead of hiring [local] workers from the displaced and jobless African American community, he sent recruiters to hire us. At around $6.00 an hour, we were cheaper. As temporary workers, we were more exploitable. We were hostage to the debt in our home countries; we were terrified of deportation...

The report details various forms of mistreatment that guestworkers like Castellanos-Contreras have suffered, such as wage theft and labor trafficking. In an email to Working In These Times, Castellanos-Contreras says of the Third Circuit Court ruling, “The court has caught up with what thousands of guestworkers have been saying since Hurricane Katrina: to stop exploitation in guestworker programs, we need higher prevailing wages, and we need protections from employer retaliation to make sure that the rules of the program are enforced.”

The H-2B reforms still face legal roadblocks, however. Another, related set of H-2B rule changes has been held up by a preliminary injunction issued by a Florida court in a separate suit, brought by Bayou Lawn & Landscape Services, which might potentially lead to a conflicting ruling by the 11th Circuit Court of Appeals—one more hurdle that has so far impeded full implementation. Outside the courts, conservative lawmakers stalled the implementation of the wage rules in 2012 by voting to block the required funding for the Labor Department to carry out the regulations. (The block was lifted in the 2014 budget legislation, which should clear the way for the new standards, according to the SPLC.) Meanwhile, tepid attempts in Congress to pass more comprehensive overhauls of both guestworker programs and the entire immigration system have foundered amid political gridlock.

Stewart says that, despite the incremental legal victories, "There's still a long way to go to making these programs even remotely functional, from a worker advocates' standpoint.”

On top of their demand for stronger wage standards, the fight will continue for more safeguards against abuses like fraud in the labor recruitment process, as well as protections for their right to organize. And progressive advocates for immigrant laborers ultimately want to move away from the precarious temporary labor of the current visa system--and toward an equitable immigration policy that provides genuinely equal employment opportunities and the ability to gain full citizenship. For now, though, the court's affirmation of their basic right to fair pay marks a modest milestone in the migrants' long journey.