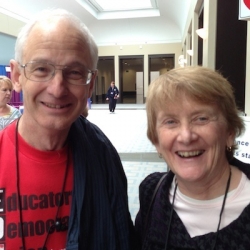 Barbara Madeloni (right) will try to harness the anger and frustration Massachusetts teachers feel into the creation of a more organized, proactive union. (Dan Clawson)

On Friday, May 9, Barbara Madeloni stood onstage at the Massachusetts Teachers Association convention in Boston and made her case to some 1,450 assembled delegates as to why they should elect her president of the union.

Calling for a union that actively fights for its members and that challenges the corporate-backed education reform machine, she told the crowd: “What would a union built on the experience of solidarity look like? A call for a moratorium on high-stakes testing, field testing, and teacher evaluations!”

Over riotous applause, she continued, “Taking the lead in the fight for a truly progressive income tax ...  and organizing across locals and within communities to name and fight for a richer, more humane and democratic regime of public education than that being foisted on us!”

By the end of Madeloni’s speech, Eugene Stein, a delegate at the meeting and a teacher at South High School in Newton, Massachusetts, told In These Times that he knew she'd win. “There was a palpable buzz as many people in the MTA were looking for a new voice,” he said. “The sentiment in the room was too strong in favor of change.”

Massachusetts teachers, like teachers around the country, have faced increased pressure from high-stakes standardized testing, charter schools, and often arbitrary standards imposed from above. “Many people seemed to have some form of frustration about the attack we have all been under for the past several years, even if some people could not quite name what that frustration was,” Stein said.

Sure enough, the following day, Madeloni received 681 votes to become the new president of the union, which represents 113,000 teachers in Massachusetts public schools. Her opponent, the current vice president, received 584 votes. The upset shows the degree to which her message has resonated with the union's members—including her criticisms of an old guard leadership that she said was too close to “political elites” and not interested in mobilizing members to take action.

Madeloni ran as the candidate of Educators for a Democratic Union (EDU), a reform caucus within the National Education Association-affiliated union. A former English teacher and teacher educator, she was recruited by EDU to run for president last fall as a challenge to the incumbent leadership. She came to national prominence in 2012 when her class of student teachers at the University of Massachusetts-Amherst refused to take part in a pilot teacher assessment and licensure program developed by Pearson, the testing and education reform behemoth. Challenging the idea that they could be assessed properly from a 20-minute video of their classroom teaching, the student teachers refused to send the videos to the company. (Pearson was paying evaluators $75 per assessment, advertising the work as available for current or retired licensed teachers or administrators; meanwhile, in states that choose to use its program, student teachers would have to pay up to $300 for the privilege of being evaluated.)

“The solidarity that we felt [when we decided to refuse] was just amazing,” Madeloni told In These Times a few months into her campaign for MTA president. “The day that they were given the papers to sign to participate or not, that room was one of the most beautiful places I've ever been. What I want to say to teachers, is 'We need to create opportunities so that you can feel that.' Teaching's already a lonely business. So how to break through the time issue, the fear issue, the lack of experience in what it feels like to be part of an activist group, in a way that you get through the fear to the courage that comes with solidarity.”

She continued, “My mission in terms of my campaign—and certainly my mission when I win—is to begin to go into those locals and say, 'What are those issues around which we can start to organize some successes here, so we can know our power and our strength?'”

Back in February, Madeloni and EDU demonstrated just how effective that strength can be. In the western Massachusetts city of Holyoke, EDU-affiliated teachers led a protest against “data walls”. They'd been told to post students' names and test scores in the classroom as a motivational tool, but, as teacher and EDU member Agustin Morales told In These Times at the time, instead the walls made his students feel “worthless.” The teachers confronted the superintendent at a school committee (the equivalent of a school board) meeting, eventually forcing him to backpedal with support from angry parents who protested the humiliation of their children.

After that momentum, EDU member and University of Massachusetts-Amherst sociology professor Dan Clawson told In These Times, teachers in Holyoke, as well as nearby Northampton, voted out the longtime leadership of their local unions and brought in new leaders.

“Teachers everywhere are under attack, and are ready to fight back whenever they get the opportunity to do so,” Clawson, the author of The Next Upsurge: Labor and the New Social Movements, said of the election results. “Barbara Madeloni and Educators for a Democratic Union gave [MTA members] a chance to stand up for a new voice, a chance to put forward our vision, instead of always responding to the latest attempt to monitor and demean us. Teachers in Massachusetts seized the opportunity  and teachers elsewhere are eager to do so.”

Despite her victory last week, like other union reformers around the United States, Madeloni and EDU will still face a long struggle. Even the famously militant Chicago Teachers Union had givebacks in its contract, and it has faced school closures and layoffs since its 2012 strike. Across the country, Jesse Hagopian, a leader in 2013's famous test boycott at Seattle's Garfield High School, lost his bid to become president of the Seattle Education Association by just a few votes.

Nevertheless, Madeloni's victory is just the latest sign that teachers are increasingly tired of withstanding attacks on their commitment to their jobs, and of suffering through high-stakes tests and assessments developed by corporations and imposed from above. Though EDU focused most of its attention on winning the presidency and did not bring an entire slate of reformers, Madeloni's unexpected win gives her a chance to try and harness the anger and frustration Massachusetts teachers feel into creating a more organized, proactive union—one that incorporates broad social justice principles into its work.

“It was a true exercise in democracy,” said Stein about Madeloni’s triumph. “I wish my history students could have witnessed it.”