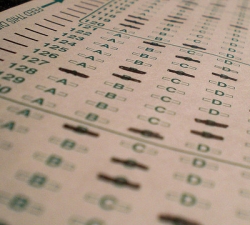 Gus Morales, a middle school teacher from Holyoke, Massachusetts, opposes the release of standardized test results. He was released from his job when he began speaking out against the privatization. (timlewisnm / Flickr / Creative Commons).

Holyoke, Massachusetts has the third-highest poverty rate of all the cities and towns in Massachusetts. And like many other high-poverty cities, Holyoke has been targeted for education reform: high-stakes testing, the elimination of due process for teachers, and the curtailment of elective curriculums that include gym, arts and foreign languages.

In Holyoke, those policies have emerged in the form of “data walls,” which skirt the norms of children's privacy by posting their test scores for the entire school to see, as well as the outsourcing of school management to firms like Project GRAD, a nonprofit chaired by a private equity manager. For teachers, the pace of work has increased, new evaluation systems have whittled away traditional guarantees of tenure, and due process in the workplace has grown even more precarious.

Reflecting a rising tide of anger over the changes, Holyoke teachers elected Gus Morales as their union president in May on a platform that opposed education privatization. But on June 17, Morales, a middle school teacher, received a letter from his principal, Amy Fitzgerald, informing him that his employment had not been renewed.

“As I started speaking out, I was targeted with negative observations. One can infer that the negative observation was meant to quiet me. As long as I kept my mouth shut, everything was good, and then when I started speaking about what was happening to my students, I was let go,” says Morales, one of only a handful of Puerto Rican teachers in a school district that is nearly 80 percent Hispanic.

Morales' anti-privatization platform also called for a revitalization of the teachers’ union. “In the past, the union had defended its teachers, but it did so in a way that was not out in public. I want to be a teacher advocate where I attend school committees and speak on behalf of teachers,” he says.

For Morales, advocacy for teachers and students are intertwined. “At the same time that I speak for the teachers, I also speak for the students,” he says. “What do you think will happen to students when teachers are demoralized and demeaned?”

A key factor in Morales’ decision to run was the massive expansion of high-stakes testing in the classroom. “My kids spend between 25 and 28 days per year just doing tests. The administration is obsessed with increasing reading and math scores, so their answer to that is to increase instruction time in those areas,” he argues.

As a result, he says, local students are losing valuable learning opportunities in non-tested areas. “The effect is that kids in the suburbs where test scores are higher are getting a well-rounded education, and kids in Holyoke are not,” he says.

A spokesperson for the school district suggested to MassLive.com that Morales’ firing was a consequence of budget cuts. For Morales’ allies, however, the reasoning seems clear.

“Gus is suffering for speaking out,” say Barbara Madeloni, who was elected president of the statewide Massachusetts Teachers Association (MTA) in May, also on a platform of fighting back against ed “deformers.” Both she and Morales are members of the reform caucus Educators for a Democratic Union. “Now is the time to do the hard work of organizing.”

Madeloni has made reinstating Morales a high priority for the union. In a press release, organizers said Madeloni, Morales and the MTA’s top attorney had met to discuss Morales’ firing. In the statement, Madeloni is quoted as saying, “Of course the union will fight this, and fight it hard. A union can’t allow someone to be targeted for his leadership in the union and the community.”

Meanwhile, Morales’ firing has attracted significant attention from supporters in the area. A MoveOn petition to the Holyoke School Committee to reinstate Morales has nearly 2000 signatures, and around 100 people rallied at the committee’s weekly meeting on June 23 to protest Morales’ firing, as well as additional budget cuts the district has deemed necessary. (The outsized administrative expenses on behalf of the School Committee—Superintendent Sergio Paez makes $160,000 per year—have largely gone without discussion thus far.)

“[Morales] brings all this positive energy. We’ve known for the past few years that our school district was failing our kids, at least according to the state. And he’s coming and saying that there’s a bigger picture of this. Overwhelmingly he won our vote,” she says.

Rigali points out that the type of campaign to get Morales rehired is unprecedented in Holyoke. “A movement to reinstate a fired teacher has never happened in Holyoke before,” she says.

Morales is heartened by the movement to reinstate him. However, he hopes that the activism could be a harbinger of a broader campaign to stop the privatization of public education in the city.