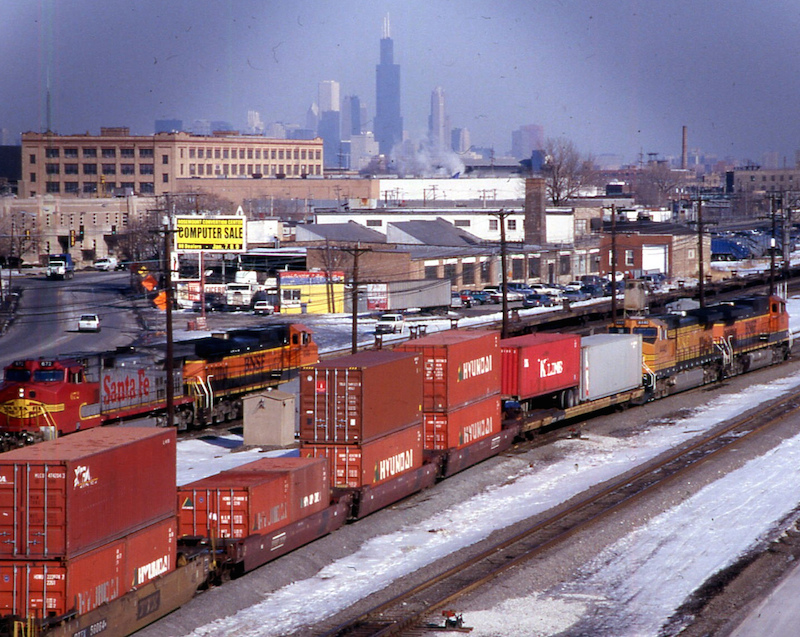 For decades, the U.S. railroad industry has successfully shed labor costs by shifting to smaller and smaller operating crews. Now, it’s on the verge of what was once an unthinkable victory: single-member crews, even on dangerous oil trains.

A tentative agreement reached by BNSF Railway and the Transportation Division of the Sheet Metal, Air, Rail and Transportation (SMART) union would allow a single engineer to operate most of the company’s routes. It would mark a dramatic change to a labor contract that covers about 3,000 workers, or 60 percent of the BNSF system.

In response, Canadian regulators outlawed one-person crews on trains carrying hazardous materials. (A single engineer was in charge of the ill-fated train, although it was unmanned when it rolled into the town center.)

As it stands, she says, the company mandates two-member crews for such shipments, and those are the terms of BNSF’s existing labor agreement.

But there is no federal law on the books that requires two-person rail crews for shipments of dangerous goods. The Federal Railway Administration (FRA) is expected to issue a proposed rule on the subject by the end of the year.

Workers worry that without contract guarantees, and no federal protections in place, BNSF will make the cost-cutting shift to one-person crews.

“If you look at the contract, there’s nothing that shows they will exempt oil trains,” says Ron Kaminkow, general secretary of Railroad Workers United, a labor group that opposes single-employee freight trains.

“[BNSF] will do whatever they want to do,” says Robert Hill, a BNSF engineer based in Hauser, Idaho, roughly 20 miles east of Spokane, a major rail hub for the Northwest. “At some point, you eventually will see a one-man crew on these oil [trains]. There’s nothing specific in their company policy that says they have to have two-man crews on oil trains.”

When asked to respond to these criticisms, BNSF’s spokesperson simply insisted the contract proposal does not apply to shipments of crude and other hazardous materials.

“This agreement would not impact [crude oil trains] because of our BNSF operating rules,” Butler said. “That’s the basic fact of it.”

In spite of the company’s line, though, nothing in the contract itself bars the use of one-person crews on freight routes. It simply states: “In all through freight service, on every through freight train where positive train control is in use upon departing the terminal/crew change point and in use on such train on the territory traversed, no ground service crew shall be required.”

In other words, on routes that abide by “positive train control”—a Congressionally-mandated set of safety practices that the nation’s biggest rail lines such as BNSF must implement by the end of 2015—the engineer will be free to ride solo. As the contract clarifies, “Any member of any train or yard crew, other than a single locomotive engineer on any such crew, shall be a ground service employee.”

Workers point out that crude isn’t the only dangerous product they’re shipping across the country. Railroads regularly move other toxic substances like ammonia, chlorine, cyanide and radioactive materials—a risky business made even riskier, workers say, when there’s only one crew member who can respond to an accident.

Robert Hill, a dues-paying member of SMART and the Brotherhood of Locomotive Engineers and Trainmen (BLET), the other major union in the rail industry, says the contract proposal undermines BNSF’s public safety pledges.

“As far as safety goes, that’s bullshit coming from BNSF,” Hill says. “They don’t care about it. It’s lip service, that’s all it is. Something bad is going to happen. I can guarantee it.”

While BNSF may tout its current operating procedures, the rail industry has long downplayed the safety advantages of using multi-member crews.

In April, after the FRA announced that it was going to issue a proposed rule on crew size, the Association of American Railroads, the industry’s principal lobby group, which includes BNSF, came out strongly against a two-person mandate.

“We actually think one-man crews are safer than two man-crews because there’s less distraction,” one railroad CEO told reporters last year after the disaster in Quebec.

The FRA tends to disagree.

“FRA continues to believe that the highest level of safety is ensured with the use of a multiple person crew,” agency spokesperson Kevin Thompson says.

Thompson declined to comment on the agency’s upcoming proposed rule. BNSF and SMART’s labor agreement would have to comply with any federal regulation that emerges. That means if the FRA mandates two-employee freight trains, then the contract would have to be updated.

SMART’s historic concession to BNSF is contentious within labor’s ranks—indeed, even within the leadership of the union itself. The president of SMART’s transportation division, John Previsich came out firmly against the proposal, penning an email to members entitled “Safe, secure operations require two-person crews.”

“No one would permit an airliner to fly with just one pilot, even though they can fly themselves,” Previsich wrote. “Trains, which cannot operate themselves, should be no different.”

Kaminkow and others from RWU say the antiquated structure of railroad unions is partly to blame for the unprecedented proposal.

Unlike most private sector unions, railroad unions are organized by craft, which, he says, makes it easier for companies to extract sector-wide concessions at its many different bargaining tables. The RWU advocates one union to represent workers across the industry.

And while the contract only immediately impacts part of BNSF operations, Kaminkow says the effects could be more widely felt.

“If this is adopted and approved and put into effect on [60 percent] of the BNSF…then you can bet the pressure will be enormous on the other 40 percent…to also move in this direction. And the dominoes will fall,” he says. “The industry as a whole is watching this avidly and you can bet your ass they’re all pulling for the BNSF to make this happen.”