Did Indiana Autoworkers Strike a Blow Against Two-Tier Contracts? 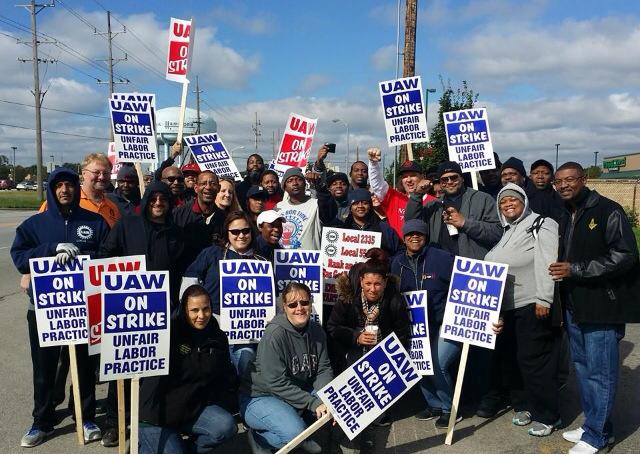 The UAW has declared ending two-tier contracts, where younger workers are paid less than older workers for the same work, a priority. (Courtesy of UAW Local 2335 / Facebook)

With their day-long strike a week ago and ratification of a new union contract on Sunday, workers at a Hammond, Indiana, auto parts plant may have dealt a blow to a divisive concession that has proven a scourge to many unions in recent years—“two-tier” wage systems.

Under these two-tier systems, new workers start at hourly rates far below longtime workers and have scheduled pay progressions that will never match the veterans’ pay (nor usually their benefits, especially pensions). For example, under the old contract at the Hammond plant, Lear paid new workers as little as $11 an hour, rising to a maximum of $16 an hour, while veterans made $19.97 an hour doing the same work.

By the end of their four-year contract with Lear Corp., local union president Jaime Luna said, the 760 United Auto Workers members who make seats for the Ford Taurus and Explorer models will all converge at the contract’s increased wage rate for experienced workers (now numbering about 200): $21.58 an hour.

But later on Monday, Automotive News reported that a Lear senior vice-president of human resources, Tom DiDonato, said that in order to eliminate the two-tier system for about 450 workers, the UAW agreed to accept a new job title for 310 positions—sub-assembly workers—with even lower wages. At the end of the contract, starting pay for subassembly workers would be $12 an hour (compared to $16.50 for assembly workers) and the maximum would be $15.25 (below the top pay of $16 an hour in the previous contract for assembly workers).

Luna continued to insist that two-tier wages had been eliminated, Automotive News reported. He said that workers’ support for the contract was “overwhelming” but refused to give the precise vote count.

In a follow-up interview, a union spokesperson, said that Lear would open a new sub-assembly plant with around 300 employees, with about 130 drawn from the existing plant, which currently does some work that will be defined as “sub-assembly” work under the new contract. The group of 130 has been assured that it has first rights to transfer back into the primary seat assembly plant and should have the same pay as other workers in that facility at the end of the contract.

The balance of the workers in the new sub-assembly plant will likely come from another contractor—CSG—that does some sub-assembly work for Lear currently at a facility with a starting rate of only $8.25, well below even the new Lear sub-assembly.

Luna’s spokesperson said that all workers under the contract will get a raise and will be able to make the top rate by the end of the contract. Benefits will stay the same for all of the Lear workers.

Two-tier systems spread throughout the auto assembly and parts industries and many other manufacturing industries in recent years, especially after the union agreed in 2007 to the demands of Detroit’s three hard-pressed auto companies. In that agreement, the final assembly plants of the “Big Three”  paid their newly hired workers slightly more than half the $28 an hour rate of veteran auto workers for doing the same work, side-by-side on the assembly line, with no prospect of ever reaching the veterans’ pay rates.

Roughly 20 to 25 percent of all union contracts have recently contained some kind of two-tier payment. Such arrangements, often made in response to threats of plant closures or job losses, can turn into strategies for long-term suppression of wages. They can also generate conflict and resentment among workers making vastly different amount of money and undermine solidarity.

But no divisions were evident as dozens of first and second-tier workers stood on the picket lines at Lear on Saturday, Sept. 13. A steady stream of cars and trucks honked in support as they drove down the busy street in front of the factory.

“We’re all out here for the same thing—equality,” said Lorenzo Jones, a second-tier worker. “We voted [in a 96 % to 4 % strike vote] to get rid of that two-tier. We got people bumping elbows doing the same work, making half the pay. First tier would like second tier to get it. They feel it’s just not right, clocking in the same time, shipping out the same time, making less money.”

Lear’s recent financial gains also motivated strikers. “They’re doing well, and we should, too,” Jones said. “We want to take care of our kids and our family. And this work is grueling.”

Local union vice-president Hanif Hassan, a first-tier worker, shared Jones’ assessment. “If a two-tier system remained in place, it would definitely benefit the company, but it would not allow our members to achieve what we believe is everyone’s right,” Hassan says. “Eradicating the two-tier system would still allow the company to be viable.”

If a movement to eliminate two-tier systems takes off, it could have a dramatic impact not just on auto parts suppliers but also on the major assembly plant contracts coming up for renegotiation next year. Although the UAW has avoided making statements on its goals, many industry observers, local union officials and members have indicated that the union wants to end the two-tier system in their next contract. The Canadian Auto Workers hailed the original announcement of a successful elimination of two-tier wages as a harbinger of UAW strategy for next year that should take pressure off them. The CAW has long opposed two-tier systems but has been pressured to make some concessions.

The two-tier system is anathema to workers and even to union officials who negotiated the arrangement, because the workers making different wages work alongside each other. But the settlement at Lear suggests that the two-tier system may be eliminated at a relatively modest cost to employers if they can divide workers by job classification or facility and still maintain huge differentials. For many years, the auto industry has operated with a relatively well-paid elite in engine, stamping and final assembly plants that were, except for foreign transplants, fairly solidly organized.

But the parts workers, who have been less thoroughly organized, have been paid far below the industry’s elite rates. The new contract could technically eliminate two-tier pay but still keep—or even expand—the multiple pay levels of parts makers and subcontractors.

Still, eliminating two-tier would be an important step back to greater solidarity in pay in the industry. “I think it will be huge,” says Coby Millender, plant chairman at the Taurus assembly plant in the south Chicago suburbs near Lear’s plant and leader of a group of workers from his local showing their support for Lear workers. “[The Lear strike and contract] will weigh on negotiations of the future. It has to. I know about the UAW plans. We don’t like two-tier. It has created a division within the UAW.”