Why Does Scott Walker Think $7.25 Is a Living Wage? 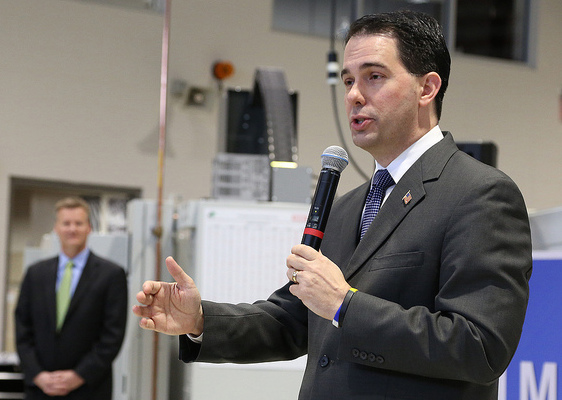 Under pressure to raise his state's minimum wage, Wisconsin Gov. Scott Walker confidently declared that there was no need to do so. Low-wage workers had filed a complaint charging that the state's minimum wage -- $7.25 -- did not constitute a "living wage" as mandated by state law. But the Republican governor's administration, after examining the issue, announced earlier this month that it found "no reasonable cause" for the complaint.

That official government finding was supposed to come from a dispassionate investigation. Yet, documents reveal that it was largely based on information provided by the state's restaurant lobby, which represents major low-wage employers including fast-food companies.

Indeed, the Raise Wisconsin campaign, which is pushing for a higher minimum wage, requested all documents on which the state based the "living wage" ruling. And the only economic study that the administration released in response was an anti-minimum-wage analysis from the Wisconsin Restaurant Association -- a group that lobbies against minimum wage increases.

Of course, there are plenty of ways to see that the minimum wage is not a living wage. For instance, there is data showing that nearly half of all restaurant workers live at or near the poverty level. Alternately, some low-wage employers have acknowledged that people who work for them can scarcely make ends meet. Last year, McDonald's corporate documents effectively admitted that its low-wage jobs do not provide enough income on which to survive.

In light of those realities, Democrats have made GOP opposition to a higher minimum wage central to their 2014 election campaign. They were bolstered a few months ago when the Associated Press reported that "the 13 U.S. states that raised their minimum wages at the beginning of this year are adding jobs at a faster pace than those that did not."

Some Republicans have responded by embracing a higher minimum wage, but not Walker, who is locked in a tight re-election battle and is seen as a prospective 2016 presidential candidate. With various localities in his state voting on minimum wage referendums in 2014, he has drawn withering criticism for saying, "I don’t think [the minimum wage] serves a purpose."

Then came the back and forth over his state's living wage law. With Walker's Democratic challenger, Mary Burke, surging in the polls, his administration was forced to respond to the low-wage workers' complaint, which argued that the current minimum wage violates state statutes requiring "every wage paid" in the state to be a "living wage."

As the complaint showed, Wisconsin's current minimum wage provides an annual income well below the federal poverty line for a two-person household. According to data compiled by Massachusetts Institute of Technology professor Amy Glasmeier, a single parent with one child would need to earn more than double the state's existing minimum wage to cover essential expenses such as housing, food and health care.

Despite those facts, Walker's administration issued a ruling rejecting the complaint. Thanks to the documents released from the investigation, we know it did so based on a restaurant industry study declaring that that raising the minimum wage could "do more harm than good."

In evaluating the living wage question, why did Walker rely primarily on the less-than-disinterested restaurant industry? It is hard to know for sure, but following the money reveals an important fact: Before the ruling was issued, Walker's campaigns had taken in more than $200,000 from donors in the restaurant industry, according to data from the National Institute on Money in State Politics.

That's a lot more cash than Wisconsin's low-wage workers can probably muster - especially when the state's minimum wage remains at $7.25 an hour.