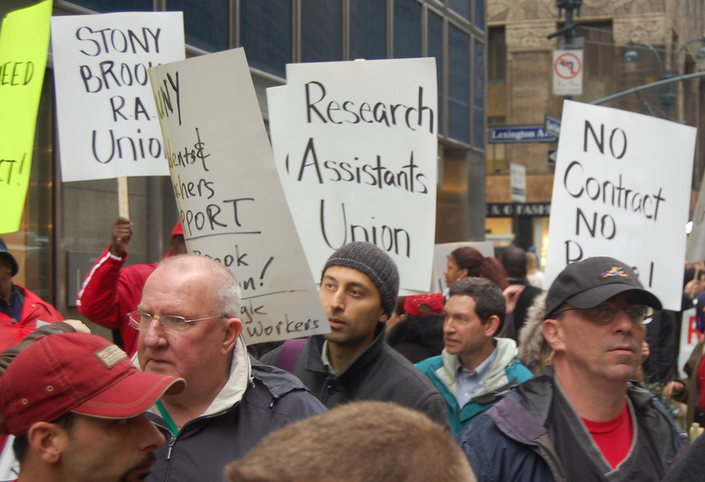 As part of the recent wave of graduate student labor unrest, like this SUNY-Stony Brook action in 2009, students in Oregon settled a strike while students at Columbia announced a new organizing drive. (Jobs with Justice / Flickr)

On December 2, three days before the end of fall semester classes, University of Oregon graduate student instructors walked off the job. It was the culmination of a year of failed negations between university administration and the Graduate Teaching Fellows Federation (GTFF), which represents the graduate instructors, stretching back to November 2013.

Organizing efforts among grad students began in the 1960s with the Teaching Assistants’ Association at the University of Wisconsin-Madison being the first to be recognized as a bargaining unit. The GTFF at the University of Oregon was formed in 1976 and has fought with university administration periodically in the years since. The union has won major demands from the university in the past, such as employer-paid health care in 1993, but the union had never gone on strike.

In this year’s round of negotiations, the biggest sticking point between the union and the university was paid sick leave. Under one of the university’s proposals during bargaining, union members received no amount of sick leave, although an instructor missing five or more days could apply for Family and Medical Leave, which allows for 12 weeks of unpaid leave. The GTFF proposal asked for two weeks annually of paid sick time for instructors.

The strike ended with a tentative agreement that would create a $150,000 fund that members could use to cover lost wages as a result of leave for medical or parental leave, according to the Register Guard.

Every graduate student, regardless of union membership, would be able to receive up to $1,000 for medical leave, and up to $1,500 for a new child’s birth, adoption or foster placement.

The tentative deal also gives GTFs a 5 percent pay raise for minimum wages retroactive to Sept. 15, and another 5 percent pay increase next year. Depending on seniority, GTFs currently receive at least $553 per month.

The strike came at the end of the semester at the university, throwing year-end grading at the university into chaos. Finals began on December 8, but roughly a third of undergraduate courses are taught by the graduate instructors now on strike. Ideas put forth by the UO Office of Academic Affairs, first in a confidential memo, included reformatting final exams to be more easily graded or canceling exams all together and providing grades based only on work completed before the strike. In response, the university’s faculty senate castigated “this confidential memo, the secret process by which it was written, and the dilution and degradation of academic standards it suggests.” The recommendations, however, were still publicized on the Academic Affairs website as viable solutions.

The United Academics of the University of Oregon, which represents full-time faculty at the university, called these measures by UO an attempt “to break the GTFF and not, as the administration insists, to maintain ‘academic continuity.’” It’s not the first attempt by the university to create division within the ranks of the GTFF. In October, the university suggested that international students who participate in a strike could lose their visa status. Doing so would result in those students potentially facing deportation. This threat was condemned by the GTFF, which informed international students that they are still protected by “law to engage in organizing and strike activities.”

On the opposite coast, Columbia University research and teaching assistants are looking to become only the second unionized students at a private university. Last year, New York University became the first (although it was technically a second incarnation of a union first organized in 2000).

In 2000, the National Labor Relations Board ruled that NYU teaching assistants were also employees of the university, not just students at the school argued. After a 2004 ruling by the NLRB said Brown University students could not organize, and NYU stopped recognizing the union. The university began working again with the union in 2013, even though the 2004 decision is still technically in effect.

Columbia University teaching assistants are hoping their university will also recognize their union despite not being legally required. They have a lengthy list of things they hope to negotiate for, according to The New Yorker, including “lower health-insurance costs … greater job security, more regular and predictable paychecks, and more generous family-leave policies.”

Students at Columbia are not alone. A victory in Morningside Heights could open the door for students at Yale who are also looking to organize. Settling the debate, which has also extended to Northwestern University’s football program, could set the terms for years to come.