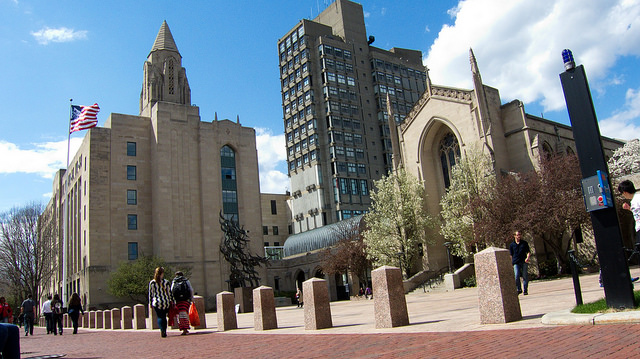 The vote comes as the campaign announces it will be seeking a new minimum of $15,000 per course for adjuncts. (Henry Zbyszynski / Flickr)

Boston University adjunct faculty voted to organize on February 4, continuing a string of victories for contingent faculty across the country and in Boston.

The vote, part of the Service Employees International Union's (SEIU) Adjunct Action and Faculty Forward actions, saw overwhelming support from the adjuncts, with 319 votes for and 158 against—a margin of almost 2-to-1 in favor. The vote will affect a total of more than 750 instructors.

The campaigns have focused on creating a better learning environment for students. With over 50 percent of faculty nationwide working as contingent faculty, according to the American Association of University Professors, their impact on students and higher education is immense. Ensuring instructors have the resources to both make a living and do their jobs is at the forefront of the campaigns.

“Every adjunct I’ve spoken with, our number-one priority is being able to focus on our students and focus on our teaching,” Bayla Ostrach, a member of the BU organizing committee, told the Boston Globe. “And it’s really hard to do that when you don’t know until the first week whether you’re going to have class.”

The Faculty Forward movement and Adjunct Action are fighting for their members as well. For organizers and faculty, a better work environment will mean a better learning experience.

“BU adjuncts have made a clear decision, overwhelmingly choosing unionization as the best way to make our university a better place to teach and to learn,” said Dan Hunter, a playwriting instructor with 15 years at BU. “I am proud to be part of a national movement working for better pay, improved stability and a real voice in the decisions that impact educators and our students.”

Among Faculty Forward’s goals is a standard $15,000 compensation per course—a monumental increase over the current national average of $3,000. SEIU also states that 80 percent of adjuncts do not receive employer health benefits and 86 percent do not receive retirement benefits. And some adjuncts, despite teaching multiple courses, are still eligible for Medicaid and food stamps.

“Last year the Massachusetts taxpayers were subsidizing Boston University’s profits,” Ostrach told the Boston Globe. “When I taught a class of 58, 57 of those students’ tuition was pure profit for the university.”

After the vote, BU administration was amenable to the new status quo.

“We look forward to continuing to work with the SEIU,” said Juditra Burgess, BU’s labor director. “We have a long history of more than 60 years of working together, and we look forward to negotiating a new contract for our part-time faculty.”

According to the SEIU, 2,600 adjunct faculty are now union members in the Boston area. For the last few years, they have been organizing adjuncts on a city-wide basis. In Boston, Northeastern University, Lesley University and Tufts University have begun contract negotiations for adjuncts. Tufts’ full-time faculty, Simmons College and Bentley University adjuncts are also preparing for union votes in the near future.