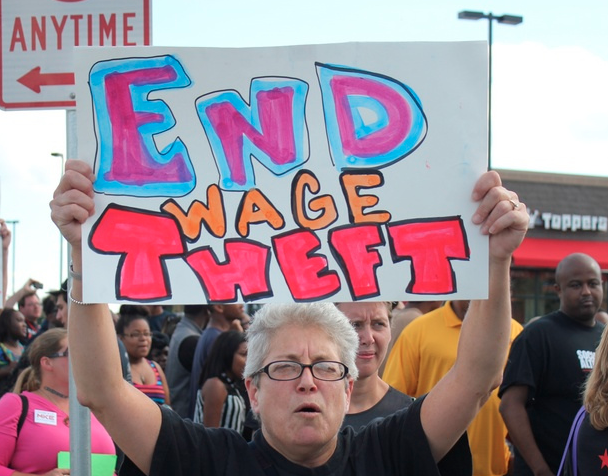 In a win for local workers, last week Illinois’s Cook County Board of Commissioners unanimously passed what workers’ advocates say is one of the strongest ordinances to combat wage theft to date in the U.S.

The Cook County Wage Theft Ordinance aims to punish companies guilty of shortchanging their workers by taking away lucrative county contracts and various tax incentives. Unscrupulous employers can steal from their workers in a number of ways, including not paying a minimum wage, incorrectly classifying employees as contractors, stealing tips and not paying overtime. Cook County Board President Toni Preckwinkle said the ordinance would be a model for similar legislation nationwide.

The ordinance uses the economic leverage of the county to remove economic incentives from employers who steal wages. Businesses convicted of wage theft could risk losing their business licenses, as well as being barred from receiving contracts with the county and property tax incentives for a period of five years.

In 2013, Arise had success passing a similar ordinance in Chicago (which is located in Cook County). Under that ordinance, companies convicted of wage theft would have their business licenses revoked. After the success of that campaign, according to Adam Kader, director at Arise’s Worker Center, they wanted to explore what could happen at the county level. A major campaign this summer surrounding Source Interlink, Kader says, sped things up.

“It showed in a dramatic way, to elected officials, why wage theft is a fact that merits attention,” says Kader.

When Source Interlink, a magazine publishing company, shut down its McCook, Illinois, distribution center without notice on May 30, over 200 workers were left with no work or severance pay. The Illinois Workers Adjustment and Retraining Notification Act requires large companies to provide 60 days’ notice about the layoffs, but Source Interlink did not. Arise supported the workers in finding new employment and in a class action lawsuit to recover their 60 days’ worth of wages against Source Interlink.

Arise also brought the issue to the attention of Jeffery Tobolski who, in addition to being a county commissioner, is the Mayor of McCook. Tobolski said that wage theft was a growing problem in Cook County that hurt both workers and law abiding businesses.

“Many businesses are targeting low wage workers,” he says, “who lack either the sophistication or the resources to adequately defend themselves.”

The language of the ordinance was the result of collaboration between Arise and the Board of Commissioners. Arise worked with Tobolski’s and Preckwinkle’s staffs to turn what was Arise’s concept into a functioning law.

“This was actually a collaborative effort. This wasn’t like Arise came in with demands and had to fight the county over it,” says Kader. “This was truly a community partnership.”

Aside from covering a greater geographic area than the previous wage theft law, the Cook County ordinance is larger in scope as well, going beyond business licenses and impacting the potential profits of dishonest businesses.

It received overwhelming support from the Board of Commissioners, including President Preckwinkle.

“In a sense, this is the least controversial law ever,” says Kader. “This is saying, ‘If you violate laws, you’re not going to get other public benefits.’ ”

Wage theft is a problem with large amounts of money at stake, especially for low-wage workers. In 2008, a joint study by the Center for Urban Economic Development, the National Employment Law Project, and the UCLA Institute for Research on Labor and Employment found that nearly 60 percent of the surveyed workers had experienced some sort of wage violation. The violations included examples of not receiving overtime pay, breaks shorter than legally required, and being paid below the minimum wage. In Cook County alone, the study found that $7.3 million is being stolen from workers every week.

The study concluded that “many employment and labor laws are regularly and systematically violated, impacting a significant part of the low-wage labor force in the nation’s largest cities.”

More recently, the Economic Policy Institute published a study in an attempt to gauge the amount of money workers lose due to wage theft. In 2012, the study surveyed the departments of labor or attorneys general offices of nine states, and found that although those institutions had recovered nearly $1 billion in stolen wages, around $50 billion is being stolen from workers annually. The study suggested increasing the penalties for wage theft violations, noting that the maximum civil penalty is just $1,100.

In recent years, states and local governments have made some progress in setting stricter fines for violators, and stricter penalties for repeat offenders. Cook County’s ordinance, by using the carrot and stick of county contracts—as well as applying to first time violators—is the harshest in the nation thus far, and should serve as a benchmark for future campaigns.