After 6-Week Strike, Oil Workers Say They Have “Won Vast Improvements in Safety and Staffing” 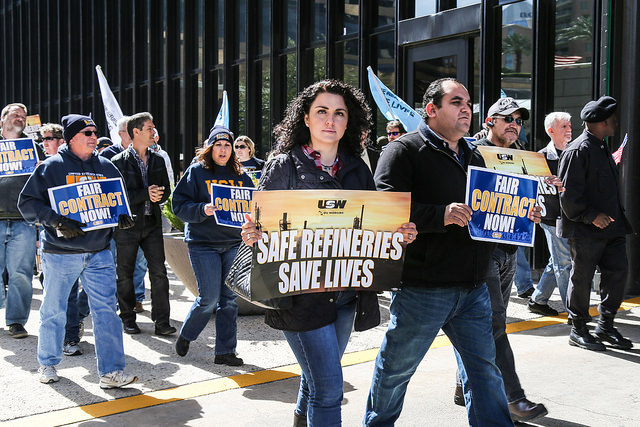 The nearly two-month-long strike may be close to ending. (Elizabeth Brossa / Flickr)

Negotiators from the United Steelworkers and Shell, the lead bargainer for unionized oil refining businesses, reached agreement on a new national contract on Thursday. It was a first big step towards ending the nation’s largest oil refining industry strike since 1980.

The unfair labor practice strike started at nine oil and chemical facilities on February 1, when the union accused the companies of bad faith bargaining over key issues in the new contract that was under negotiation, primarily health and safety and related issues, such as contracting out maintenance work. Later six more facilities joined the strike. Later workers at six more facilities joined in the walkout, for a total of more than 6,550 on strike.

Whether or not workers have been on strike there, each local union now needs to negotiate a contract that incorporates the national agreement and resolves local issues before the dispute—affecting about 30,000 workers at more than 100 refineries and related facilities, who account for 64 percent of the industry—is ended.

Over many years, the industry has increased pressure on its generally high-skill workforce, often forcing them to work 12-hour shifts for several weeks straight.

“They totally grab hold of our schedules to the point that the workers have no family life. I call it ‘management by stress’,” says southern California local leader Dave Campbell. Workers suffer from fatigue and find it more difficult to work safely, he says.

They also are more vulnerable to management arguments that the company needs more outside contractors, many of whom are non-union and are often less knowledgeable about the equipment than a regular, full-time maintenance crew.

In negotiations, the company insisted that issues about staffing were part of management’s prerogative to control the operation and not legitimate subjects of negotiation. The union did not win strict limits on overtime or outside contracting, but will have an ongoing role in reviewing and evaluating these issues in each plant.

USW spokesman Wayne Ranick explains that "at every facility there will be a review of workloads and staffing involving the United Steelworkers. These will be comprehensive reviews by both parties."

Now standards are set by the American Petroleum Institute, but the industry group’s judgment does not satisfy the union, some of whose leaders think that government regulations or legislation will be needed to guarantee both worker and community safety. Ranick says that the union wants better quantification of the factors that go into staffing decisions and more active consultation. The union also believes that, in the long run, “repair work is the work of our members,” even though there are some disagreements with construction trade unions whose members are often on outside crews.

Many contractor crews, along with managers, technicians and even clerical workers have been recruited to keep the plants running during the strike, but production has still slipped, partly accounting for gas price hikes in parts of the country, such as California. Union leaders worry about public anger with the higher prices but blame management. They worry as well about dangers to the community.

The USW’s attention to workplace and community health and safety, as well as its long-standing alliance with environmental groups on a wide range of issues, helped generate support for the strike from environmental organizations, such as Citizens for a Better Environment in California, as well as a variety of other progressive groups, including National Nurses United and, in a rare solidarity action with a strike, MoveOn.org.

The contract includes “substantial gains,” Campbell said, including provisions on health and safety. Wages will rise 12 percent over four years; health care coverage remains the same (despite corporate attempts to roll back insurance provisions); pensions remain unchanged; and there appears to be improved protection of a variety of gains from past contracts that the companies wanted to treat as one-time agreements.

In the end, solidarity won the day, USW president Leo Gerard said. “There was no way we would have won vast improvements in safety and staffing without it.”