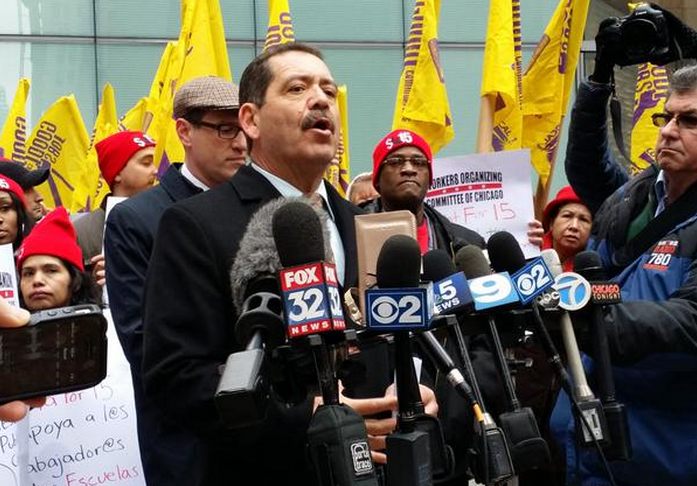 Chicago mayoral candidate Jesus "Chuy" Garcia, with Chicago Teachers Union Vice President Jesse Sharkey and members of the Fight for 15 campaign behind him. (Fight for 15 / Twitter)

The Fight for 15 and the Chicago Teachers Union (CTU) have joined together to demand that Chicago Public Schools (CPS) employees should earn at least $15 an hour, including contract workers such as the janitors provided by Aramark in a controversial privatization of school sanitation that has provoked protests by public school principals.

At a press conference on Wednesday announcing CTU's demand, Chicago mayoral candidate Jesus “Chuy” Garcia pledged that he would support the $15 wage. “I stand here today as someone who understands the plight of thousands and thousands of Chicagoans in Chicago neighborhoods who need to increase their wages,” said Garcia.

“You can’t expect schools to solve all of the problems of the country,” says CTU acting president Jesse Sharkey. “One of the solutions is to pay parents and contract workers a living wage. It’s very important to locate demand for better education within the demands for a society that treats working class people better. Chicago Public Schools should lead by example.”

The inclusion of a $15 per hour minimum wage in other unions' bargaining efforts is the latest in the expansion of the Fight for 15 campaign. Two and a half years ago, workers at fast food restaurants in big cities such as New York and Chicago began walking off their jobs, demanding $15 an hour and no employer interference in their deciding about whether to form a union.

The goals of their movement quickly resonated among the nation’s low-wage workers. Taking the most recent available numbers from 2014, about half of all women workers and more than 40 percent of the workforce as a whole eared less than $15 an hour, according to the Economic Policy Institute. Equally important, the movement captured the imagination of the broader citizenry, offering a vivid contrast with the ultra-rich 1 percent, just as the debate over economic inequality took root in the body politic.

A renewed fast food worker spring offensive now underway shows how the movement has grown in size and sophistication as well as ambition and influence. The actions planned for this spring will reach out to low-wage workers in many industries and corporations, hoping to trigger new and broader campaigns both to organize unions and improve pay and working conditions.

The strategy of the Fight for 15 has focused its attacks over the past year on McDonald’s, which sets the tone for the fast food industry much as Walmart does for big box retail.  McDonald’s is also vulnerable to the workers’ campaign because of its other problems with sales, consumer satisfaction, public image, management and profits.

Both McDonald’s and Walmart remain obdurate opponents of unions, even though Walmart’s recent decision to raise many of its lowest pay rates surely stemmed in part from the Fight for 15 campaigns for pay hikes. Progress that workers make at the dominant companies may spread with less of a fight, just as Target followed Walmart’s lead in raising wages.

The Fight for 15 (known in New York as Fast Food Forward and by other names elsewhere) has already stepped up its fight through a series of actions around the country intended to build momentum for what organizers hope will be a massive day of protest on April 15 (or 4/15, i.e., “for fifteen”).

Based on the expanding alliances they have formed, organizers are confident that many unions, community and religious groups, non-union worker organizations, unorganized workers from a wide range of low-wage and other supporters will join the protests, and some may also participate in this year’s actions at the May McDonald’s stockholder meeting in a Chicago suburb.

In Chicago, to take one example, the Fight for 15 has counted on support from a few unions in addition to the Service Employees International Union (SEIU) (whose national leadership has provided substantial financial and organizing assistance), worker centers such as Arise Chicago and low-income organizations such as Action Now, a close ally of SEIU.

But recently more conventional community organizations, which have only rarely become involved in workplace issues, have demanded that McDonald’s pay $15 an hour or more.

For example, in the city’s working class southwest side neighborhoods, the Brighton Park Neighborhood Council joined McDonald’s workers in demanding higher pay, especially in light of the deep cuts in services like heating assistance, Medicaid and public transportation that the new Republican Gov. Bruce Rauner has imposed.

And in comparable northwest side neighborhoods, Communities United director Raul Botello said that the group recognized that higher incomes for its residents were essential to making the communities strong. “Jobs are the backbone of the community,” he says.

In addition to drawing support from other unions and worker organizations, the Fight for 15 now feels confident enough to offer its own gestures of solidarity with other workers, such as sending a delegation to join the United Steel Workers refinery workers on strike, largely over health and safety issues.

Those protests, in turn, linked to new issues that fast food workers were raising regarding their own work. Last week, the national Fight for 15 launched a new street protest and legal attack on McDonald’s for its poor safety record, including 28 Occupational Safety and Health Administration (OSHA) complaints about McDonald’s franchises and corporate-owned outlets in 19 cities.

Workers reported that they were repeatedly burned and otherwise hurt on the job because there was inadequate equipment and training for handling and protecting themselves from hot grease. A survey by Hart Research found that 87 percent of fast food workers suffered injuries last year, including 78 percent who suffered multiple injuries. Workers said the injuries primarily occurred because the restaurants are understaffed and managers push them to work too fast.

Also, McDonald’s workers said the restaurants often had no first aid kits or any materials in the first aid boxes. Supervisors, lacking proper burn treatments, told them to use mustard, mayonnaise and butter on their burns.

The complaints about workplace health and safety also tie in with other Fight for 15 objectives. Unlike the demands for higher wages, which the corporation could pay and then successfully undercut the organizing campaign, the campaign for safety requires greater worker power on the job.

Also, the safety complaints take another step towards attempting to establish that the corporation is indeed a joint employer with the franchise operators, much as the workers have contended in early complaints about corporate involvement in illegal measures to block unionization. Next Monday, the National Labor Relations Board will hear the first of 19 consolidated complaints filed claiming that McDonald’s Corporation was indeed acting as a joint employer in its coordinated fight against workers’ attempts to organize.

And in another solidarity action, fast food workers joined with a delegation from Next Up, the AFL-CIO young worker group that was holding a convention in Chicago, to march on a West Side Chicago McDonald’s and then, joined by workers who were trying to form a local of the United Food and Commercial Workers (UFCW) at a nearby Food4Less, the group marched on the grocery store.

And with yet another link forged, the Fight for 15 grows, not only in numbers, allies and power, but also in the breadth and depth of its message.