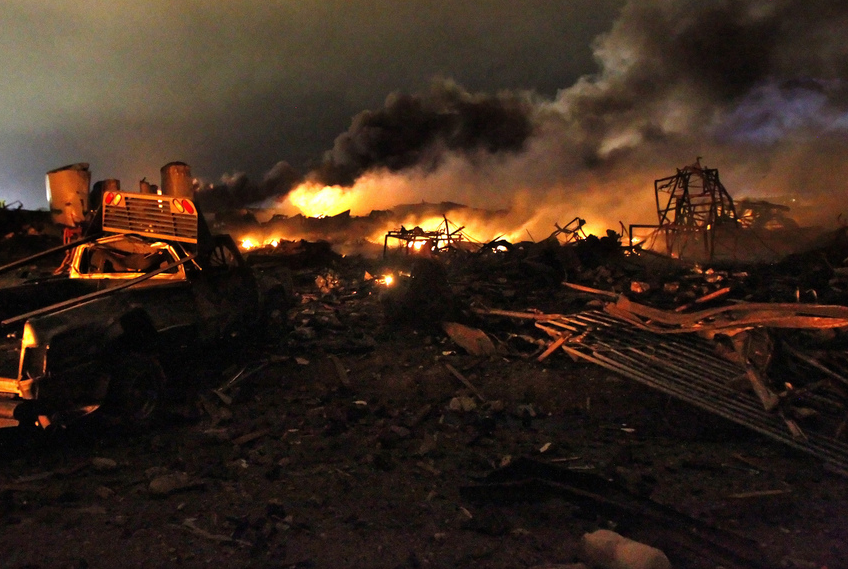 Much of West, Texas looked like a post-apocalyptic wasteland after the fertilizer explosion two years ago. But steps to prevent further disasters aren't being taken. (A Name Like Shields... / Flickr)

On April 17, 2013, a massive fire and explosion tore through the West Fertilizer plant in West, Texas, killing 15 people—including 10 volunteer firefighters—and injuring more than 200. Fueled by the 30 or so tons of explosive ammonium nitrate on site, the blast ripped through the wooden building and its flammable contents, destroying three nearby schools, a nursing home and devastating 37 city blocks. A federal government investigation into the disaster found enormous gaps in information made available to first responders and the community about the plant’s highly hazardous materials – information that could have prevented or reduced the loss of life, injuries and damage.

Two years after this catastrophe, the Center for Effective Government has taken a look at the disclosure practices around such hazardous chemicals—and found what’s required of these facilities to still be “inadequate and insufficient.”

In a report released this week, the Center for Effective Government, a non-partisan government watchdog, examined emergency response planning and reporting on chemicals required of plants like West Fertilizer under the federal Emergency Planning and Community Right-to-Know Act of 1986 (EPCRA)—enacted in response to the 1984 release of deadly methylisocyanate gas from the Union Carbide plant in Bhopal, India that killed thousands and injured many more—and the Clean Air Act. Instead of comprehensive and coordinated reporting and planning that could help prevent the loss of life and injuries, CEG found “a patchwork of laws and regulations that cover chemicals and are supposed to be safeguarding the public,” says CEG Open Government Policy program director Sean Moulton.

“There are gaps between these programs, and West Texas, really highlighted this,” says Moulton. “It’s very hard to know what information is where and how planning is rolled out. It’s very clear that responders in West, Texas didn’t know how to respond,” he says.

Absent information about hazards at the plant, volunteer firefighters arriving on the scene were unaware of that ammonium nitrate might be in the process of exploding. There was—and still is—nothing that would have compelled anyone to alert community residents or local government that schools, healthcare facilities, homes or businesses were located near a plant housing massive quantities of explosive materials. And under current laws and regulations, nothing required the West Fertilizer company to report its use and storage of ammonium nitrate to the EPA or authorities with whom it might develop an emergency response plan.

What the laws do—and what they don’t

Under EPCRA, facilities that use or store hazardous substances are supposed to provide information about what’s on site to a state agency that shares this information with a State Emergency Response Commission, which then sends it to what’s called a Local Emergency Planning Committee. It’s up to the local committee to develop an emergency response plan that is coordinated with local first responders. Meanwhile, the 1990 Clean Air Act amendments require companies that use any of 140 extremely dangerous chemicals to report this information to the EPA and develop a “risk management plan” to be used in case of an emergency. This plan is also supposed to be shared with local first responders.

What CEG found, however, is that much of this information-sharing never happens. In all but five states, no full inventory of hazardous chemicals is publicly available. Two states did not make any such information available: Nevada, which declined to provide CEG with information, and Texas, which never shares this information with the public.

Additional gaps in these and other federal and local laws mean that thousands of facilities storing billions of pounds of highly hazardous chemicals all around the country lack emergency response plans that are actually communicated to or coordinated with local authorities and first responders. And where response plans do exist, there’s no guarantee that these details are publicly accessible.

“The EPA still doesn’t have risk management plans on-line,” Moulton explains. “Many states also don’t have these on-line. Many cite security reasons for this,” he says. And says Moulton, “We can’t really say what’s going on with local emergency planning committees.” There’s no list of the committees, and the last time EPA surveyed them was in 2008, he explains.

The upshot are situations like West, Texas where first responders and plant neighbors have no advance information or plan in place in case of an emergency when a delay can make an already dangerous situation even more serious.

Whether it’s in the community or on the shop floor, making certain there’s a response system if something goes wrong is essential, says United Steelworkers assistant director for health and safety Jim Frederick. “Working without that is foolishness,” he says.

Need for improvement but little progress to date

Recognizing the need for improvement in the wake of the disaster, President Obama issued an Executive Order directing federal agencies—including the Environmental Protection Agency (EPA) and Occupational Safety and Health Administration (OSHA)—to work together to improve the safety of facilities like the West Fertilizer plant where hazardous chemicals are used and stored. The EPA also issued what’s called an advisory about ammonium nitrate and with OSHA has proposed measures to enhance its required risk management plans. According to an EPA spokesperson, the agency is now reviewing the nearly 100,000 public comments received on this proposal.

So has anything changed since the West, Texas disaster?

“It would be really important for EPA to finish their rule-making on both better reporting, more thoughtful disclosure and transparency and also efforts on taking steps to move toward inherently safer practices,” says Charlotte Brody, the BlueGreen Alliance’s vice president of health initiatives. “Good drafts have been written but there’s no sign of them being done,” says Brody. “We’re concerned that proposed rules will never turn into regulations,” she says.

Greenpeace’s legislative director Rick Hind takes an even harsher view. “The EPA is bringing foot dragging to an art form,” says Hind. He points out that the EPA’s current schedule for finalizing improvements to risk management planning and what’s called “process safety management” – what happens on a day-to-day basis on the shop floor to involve all employees in safe operating practices – risks running out the clock on the Obama administration.

As Brody explains, simply knowing what hazardous substances are on site, where and how they’re being used—and recognizing the costs and time involved in making sure nothing dangerous happens—are the first steps toward considering moving to safer materials. But right now, as the Center for Effective Government report details, information on these hazards is poorly documented.

So not only are catastrophic chemical accidents continuing to occur—and with disturbing frequency—but, according to the CEG report, facilities that use hazardous materials, communities and emergency personnel are lacking the information they need to respond.

It may sound like a pesky civic detail, but says Moulton, “It’s very important, local response planning” and in the case of West, Texas, “they weren’t prepared.”

“I don’t want to be talking to you when the next disaster hits and we’re saying, ‘I told you so.’ I’m not interested in, ‘I told you so,’” Brody says. “I want them to do it now.”