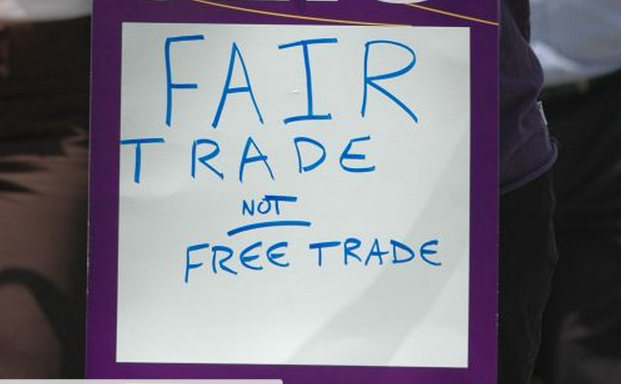 Democratic and Republican presidents alike have all sworn in the last two decades that protections for workers in trade agreements would be strictly enforced. But none of it was true. (b.wu / Flickr)

It’s all the rage now for Republican presidential candidates to spurn the Royal Romney approach and, instead, to fawn over workers.

When former U.S. Sen. Rick Santorum announced his presidential bid last week, he did it from a factory floor and called for increasing the minimum wage. Former New York Gov. George Pataki, who also launched his candidacy last week, named as his political inspiration Teddy Roosevelt, a corporate trust-buster and working class hero. U.S. Sen. Rand Paul, who entered the race in April, said that to win elections, “You’ve got to get the people who work for the people who own businesses.”

That is true—if the businesses are in America. There’s not much point in American candidates soliciting votes from workers at factories that U.S. corporations closed here and moved overseas with the help of free trade agreements (FTAs). Decade after decade of free trade, presidents promised workers that the deals set the highest standards for labor. And decade after decade, the federal government failed at enforcement, placing Americans in competition with child laborers, underpaid and overburdened foreign workers and victims of human trafficking.

On trade, Sen. Paul got it right for working people. He opposed Fast Tracking approval of the 12-country Trans-Pacific Partnership (TPP) through Congress. He was on the losing side of that vote, though. So the Fast Track plan for Congress to relinquish its responsibility to review and amend trade agreements awaits action this week in the U.S. House of Representatives. House Republicans who believe in supporting American workers, not just pandering to them, should join Sen. Paul in voting no on Fast Track.

From Bill Clinton to Barack Obama, Republican and Democratic presidents have pledged to workers that some new free trade scheme would protect Americans from unfair and immoral foreign competition.

They all swore the standards would be strictly enforced. But none of it was true. The deals did not protect American workers. And they didn’t protect foreign workers either.

Americans have found themselves competing with children coerced to work in foreign factories, trafficked and forced labor, and foreign workers so mistreated that they jump to their deaths from factory buildings. American consumers find themselves buying products made in unsafe buildings that collapse or burn, killing thousands of foreign workers.

The USTR, who is supposed to enforce the labor provisions of trade agreements, along with the U.S. Department of Labor (DOL) and Department of State, has failed. That’s according to two reviews by the U.S. Government Accountability Office (GAO). After a damning GAO report in 2009, the USTR promised action. A second GAO analysis in 2014 reported little change.

In other words, no matter what those agreements say about labor, it’s not being enforced.

For example, five years after Guatemala entered CAFTA, the International Trade Union Confederation (ITUC) named Guatemala the most dangerous country in the world for trade unionists. That’s because of the large number of union activists murdered, tortured, kidnapped and threatened there.

This was a startling development because Colombia had a lock on the inglorious title of most dangerous for years. Colombia dropped from first place even while murders of trade unionists continued there.

Since Colombia finalized a free trade agreement with the U.S. in 2011, two dozen Colombians trying to improve the lives and wages of workers through collective bargaining have been murdered every year. And these murders are committed with impunity. There are virtually never arrests or convictions for killing trade unionists in Colombia. Colombia’s trade deal with the U.S. and its “enforcement” by the USTR, DOL and the State Department have done nothing to change that.

And as in Guatemala, trade union activists in Colombia continue to be threatened, tortured and kidnapped. The free trade agreement is no shield for them. For example, a paramilitary group threatened the daughters of Martha Cecilia Suarez, the president of the Santander public servants association.

In 2013, the paramilitary group Comando Urbano de los Rastrojos sent her two dolls marked with her daughters’ names. They were covered in red paint, one missing a leg, the other an arm.

The 14 free trade agreements that the United States has signed with 20 countries contain provisions allowing groups or individuals to file complaints about such violations of the labor standards. The 2014 evaluation by the GAO suggests that only a tiny number of complaints have been filed because the Labor Department has failed to inform stakeholders of this process and few within the foreign countries know about it.

The GAO also found that the Labor Department has failed to meet its own deadlines for investigating and resolving the complaints it has accepted. Serious allegations, including human trafficking and child labor, remain unsettled for years.

Admittedly, this is a titanic challenge. What the United States is trying to do is tell other countries, often ones far less wealthy, how their businesses should treat workers. The United States hardly would take kindly to Guatemala telling it that the U.S. minimum wage is so low that it amounts to forced labor.

But president after president has promised American workers that the United States will compel foreign nations to meet high labor standards established in FTAs.

They haven’t accomplished that. They probably can’t. They should stop saying it. And American workers and politicians should stop buying it. The United States can sign trade agreements with countries after they stop murdering trade unionists and countenancing child labor. Entering agreements with countries that permit these grotesque practices demeans American workers and consumers.