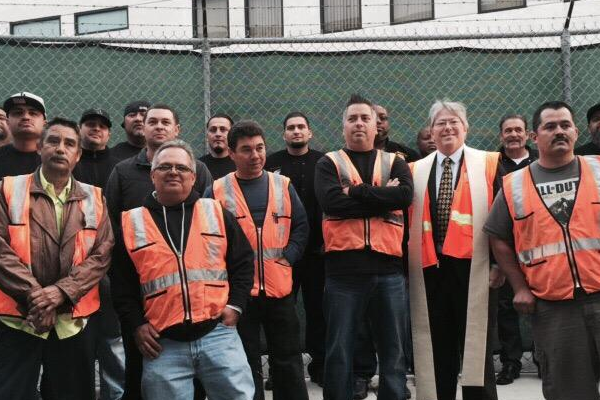 Port drivers from IBT deliver a petition on June 5th demanding to be reclassified as employees.   (Justice For Port Drivers)

Less than two months after participating in a strike against trucking companies allegedly committing wage theft at the Ports of Los Angeles and Long Beach, a supermajority of drivers at Intermodal Bridge Transport (IBT) are poised to strike in order to pressure IBT into correcting their alleged misclassification as independent contractors.

IBT, which moves merchandise for Sony, Toyota, General Electric, Target and JC Penney, among others, is a subsidiary of the Chinese Government-owned COSCO Logistics Americas network and employes 88 drivers, according to the union supporting driver efforts, Teamsters Local 848.

The drivers contest that their status as independent contractors is wrong and creates wage theft that amounts to almost $1 billion yearly in California alone, according to estimates by local allies.

Although IBT provides the vehicle that truckers drive (which is standard in an employer-employee relationship), IBT has a leasing arrangement with the drivers to pass along the costs of business on to them. “They deduct reparations, they deduct diesel fuel, they deduct anything they see convenient from the paycheck,” explains Humberto Canales of a fellow trucking company, XPO Logistics.

Their alleged misclassification as independent contractors makes the truckers ineligible for not only the much-publicized recent $15 minimum wage ordinance in Los Angeles, but also for unionization.

On June 5, IBT truckers delivered a petition signed by 59 drivers to executives at IBT, COSCO and their Fortune 500 clients at the Ports of Los Angeles and Long Beach, in order to inform management that they had chosen Teamsters Local 848 as their collective bargaining representative. The drivers hope that the letter will stimulate movement on re-classification, and are threatening to strike if the outcome is not in their favor.

“We will fight for as long as it takes and are even ready to go on strike again. But all of that disruption and expense can be avoided if the company simply chooses to do the right thing and recognize our rights as employees and right to become members of the Union,” says IBT driver Hector Flores.

Barb Maynard, an official at Teamsters Local 848, points to April’s trucker strike as a catalyst for the pro-union mood that culminated with the June 5 letter, saying that while only 8 drivers went on strike on the first day, by week’s end that number grew to 57. “They went out on strike, and the strike grew—their numbers kept growing. ... They were organizing themselves in the middle of the strike. It was really incredible,” Maynard tells In These Times.

Teamsters Local 848 says that IBT drivers were particularly emboldened by the unionization of truckers at Shippers Transport Express, whose previous legal challenges had successfully compelled the trucking company into reclassification of their workers. COSCO and SSA Marine, the respective parent companies of IBT and Shippers, together own and operate Pacific Container Terminals, a 256-acre marine terminal at the Port of Long Beach. Drivers at both companies were close enough to observe the benefits of full employment status and collective bargaining, workers say.

“Drivers at Shippers Transport Express, who were converted to employees in January and soon thereafter became Teamsters, had to fight through the courts to get their rights. We are hoping to avoid that long and expensive legal process because we know that we are misclassified at IBT—just as they were at Shippers,” Flores says.

IBT truckers are also currently involved in class action and individual lawsuits alleging wage theft and misclassification. The union expects this litigation to be ruled in favor of the truckers.

“[All driver-trucking company litigation] is the same. The working circumstances are all the same—exactly how these companies set up their leases...what deductions they make,” Maynard says. “There’s no reason to believe that, if these drivers do have to take their cases all the way through the court system, which takes years, that the outcome would be any different than what it’s been at Shippers or at any place else.”

Meanwhile, Los Angeles Mayor Eric Garcetti has recently spoken out against misclassification and related wage theft. “The misclassification of port truck drivers is not the gripe of a few drivers but a battle cry of a systemic problem that must be addressed,” Garcetti said at a May press conference, while celebrating the creation of a new 100%-employee-driver trucking company called Eco Flow.

As progressives across the country celebrate the passage of yet another successful $15 minimum wage campaign, and conservatives damn the unions who wish to collectively bargaining for low-wage earners, IBT truckers will eye a possible strike in order to simply qualify for a minimum wage at all.

According to Maynard, IBT truckers “are not going to sit around and wait for either mayor to take action. … [Drivers] are going to continue to fight back. Every day that they are misclassified is another day that their wages are being stolen,” she says.