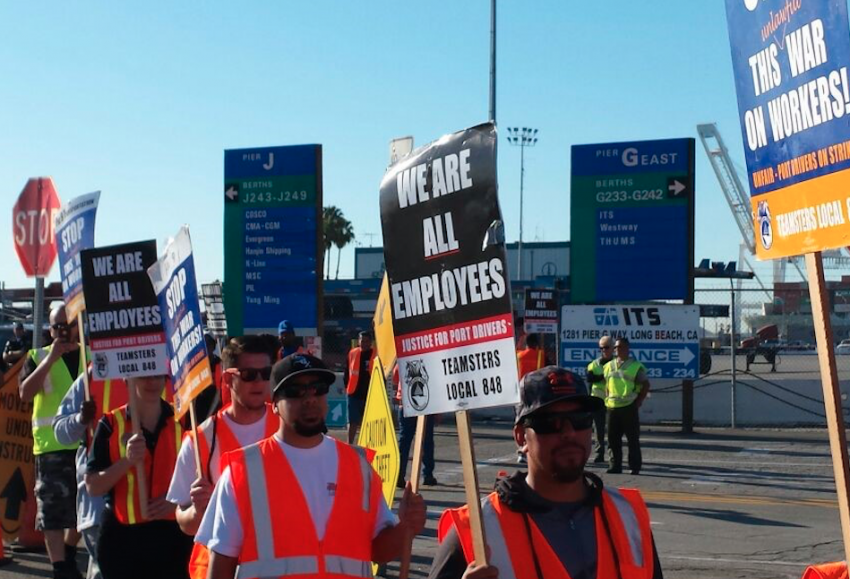 Hundreds of truck drivers operating at the Ports of Los Angeles and Long Beach went on strike Monday morning in protest of wage theft by four of the ports’ largest trucking companies, who they say misclassify them as independent contractors rather than full-time employees.

The trucking companies, Pacific 9 Transportation (or “Pac 9”), Intermodal Bridge Transport, Pacer Cartage and Harbor Rail Transport, operate a combined 470 registered trucks and do business in the Southern California ports that currently handle 43% of U.S imports entering the country. The companies under strike count Walmart, Forever 21, Toyota and Costco as clients, among others, according to the union behind organizing efforts, Teamsters Local 848.

The union states that independent contractor misclassification makes truckers ineligible for unionization and victims of wage theft, stemming from a lack of unemployment benefits, employer-provided health-care and hourly or overtime pay.

Despite working under much of the same rules and conditions as full-time employees, port truckers operating as independent contractors have truck leasing fees and expenses related to gas and maintenance deducted from their paychecks. As reported by Sarah Jaffe in In These Times last year, 2014 findings by the union and its allies at the National Employment Law Project and Los Angeles Alliance for a New Economy said that port trucking companies in California are liable for between $787 and $998 million in wage and hour violations annually, with 16,400 out of 25,000 truckers in the state being misclassified.

The strike aims to pressure the companies into changing their business model and bring attention towards a national petition released last week that demands that Los Angeles Mayor Eric Garcetti and Long Beach Mayor Robert Garcia intervene to “ban lawbreaking for profit” at the ports. The union claims workers will not back down from their picket lines until a satisfactory response is given by “lawbreaking” companies or the mayors.

Amador Rojas, an independent contractor trucker striking at Pacific 9 Transportation, says,“We are going to continue to fight so that the company ends these unjust practices. We are also calling out the authorities that permit these types of injustices.”

“We are not willing to continue their game that prolongs this truly difficult situation for all of us,” he continues, speaking in Spanish.

The company is currently set for an NLRB hearing in mid-May after the company ignored a March 2014 labor board ruling that deemed Pac 9 truckers to be direct employees rather than independent contractors. The union estimates that Pac 9 is potentially liable for at least $12 million in wage theft violations to its approximately 140 drivers. Additionally, all four trucking companies are defendants in separate pending class-action lawsuits regarding misclassification.

“We have trucking companies that are doing business on port property coming in and out and they are violating the law,” said Barbara Maynard, a Teamsters official, in a Monday morning press conference.

“That puts the mayors [Garcetti and Garcia]  in the position to say, ‘You need to start obeying the law, or you need to get off the property.’ It’s a really simple ask,” Maynard said.

Cargo will continue to move swiftly at the nation's #1 port. Port Truck drivers are a critical link in our global economy and they deserve quality working conditions.  We appreciate those trucking companies who are having an honest dialogue about these issues.  Teamsters are targeting four trucking companies that they allege are violating workers' rights.  The Port of Los Angeles is serviced by 800 trucking companies operating 13,700 trucks, so there are plenty of trucks and drivers to keep commerce flowing.

The port of Los Angeles had previously attempted to mandate trucking companies into converting all independent contractor drivers to direct employees as a part of 2008’s Clean Trucks Program under Mayor Antonio Villaraigosa, before being struck down by a U.S. Circuit Court of Appeals in 2013.

Villaraigosa championed the mandate, but by the time it was blocked, he had already been succeeded by Garcetti, whose port administration did not appeal to take the case to the Supreme Court. Garcetti has taken to bringing together the drivers and management into truces, though workers have claimed retaliation for their organizing.

Congressional legislative attempts to turn the tide on misclassification by employers has gone nowhere, with some form of the Payroll Fraud Prevention Act of 2014, a proposed bill to protect those victim of misclassification by strengthening protections and penalizing companies in violation, being introduced every year since 2010 without success.

The strike announcement simultaneously came with announcement of a “labor peace agreement” with Green Fleet Systems, a company previously targeted by port truckers. According to a joint statement put out by the union and Green Fleet, drivers at the company “have an opportunity to exercise their rights under the National Labor Relations Act and, if they choose, to select” a union.

The agreement ends years of alleged Green Fleet union-busting, barely preventing it from being subject to this week’s strike, and comes at the heels of Green Fleet’s filing for Chapter 11 bankruptcy in February 2015. Maynard claims that companies must change their business models or face the same fate.

“These companies are hemorrhaging money in wage theft claims, and if they don't start paying it now, they are going to end up in bankruptcy court themselves,” Maynard says. “They need to follow the law, reclassify their drivers and make a legitimate industry out of drayage at the ports of LA and Long Beach.”

The ports of Los Angeles and Long Beach, along with the rest of the West Coast’s ports, were the sites of major labor strife in February when stalled contract negotiations between the 20,000 dockworkers at the International Longshore Workers Union and employers at the Pacific Maritime Association, a multinational shipping conglomerate, brought U.S trade in the region to a complete standstill for six of ten days. The two sides were able to come to agreement with forced mediation by Secretary of Labor Tom Perez.

In the leadup to mediation, amid back-and-forth accusations of intentional work slowdowns, ILWU contended that a portion of port congestion could be pinned on the “exodus of truck drivers who cannot make a living wage.”

“We believe strongly that as wages begin to rise at the ports and wage theft ends, we are going to see a stabilization of the numbers of drivers,” says Maynard, agreeing with ILWU’s assessment of congestion problems.  “We need good solid middle-class jobs right here at home [to end] the drivers’ shortage.”