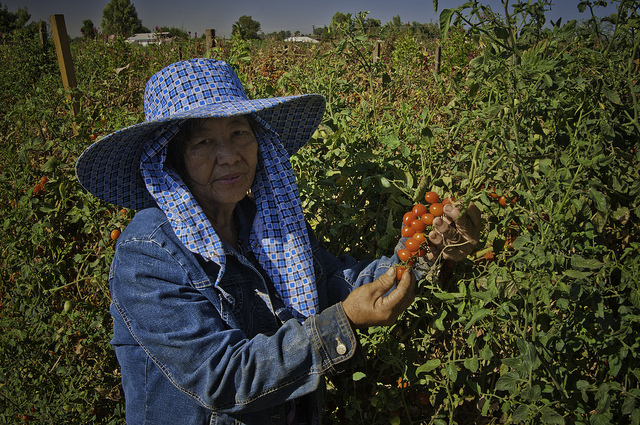 The New York State workers whose benefits most often make headlines are the Wall Streeters who took home an average bonus of $172,860 in 2014. That’s almost ten times what many of New York’s estimated 60,000 to 100,000 farmworkers earn annually. What’s more, farmworkers in New York are not currently guaranteed a full 24-hour day off each week. They also lack the right to overtime pay, to unemployment and workers compensation insurance and are without collective bargaining rights—in an industry that’s worth some $5.7 billion annually.

Legislation now being considered by the New York State Senate and Assembly aims to change this status quo. What’s being called the Farmworkers Bill of Rights or Farmworkers Fair Labor Practices Act (S. 1291 and A. 4762) would effectively eliminate some key exemptions the federal Fair Labor Standards Act grants to agricultural employers. The legislation would also require employers to report workers’ injuries and whether housing provided for farm or food processing workers’ labor camps meet legal health and safety requirements, no matter how many people those facilities house.

“Farmworkers labor under hard conditions for hours to feed all of us, yet they lack basic protections and rights afforded to just about every single employee in our state. The treatment of farmworkers is abhorrent and unacceptable,” said New York State Senator Adriano Espaillat (D-Manhattan/Bronx), the legislation’s lead sponsor, via email.

“It really is bewildering and shameful that in our country this exists, that we have a class of people that have no rights and are almost treated as workers would be in the 1800s or early 1900s,” said Hispanic Federation president Jose Calderon.

To understand how this situation can exist in a state that is now the United States’ third largest dairy producer—an industry now worth about $3 billion annually, thanks in part to the booming demand for Greek yogurt—and that ranks second nationally in apple production, and third in wine and grapes, one has to go back 77 years. When the Fair Labor Standards Act was passed in 1938, the country was in the depths of the Great Depression. To enable passage of certain New Deal reforms, compromises were struck. Among these were to exempt farm and domestic workers from some federal wage requirements. The National Labor Relations Act, passed in 1935, excluded agricultural workers from its protections, including the right to organize and bargain collectively. Yet another law—passed in 1947—made it legal for employers not to pay employees for time traveling to and from distant job sites, as is often required of agricultural workers.

Many of the workers who bore the brunt of these policies when they were first enacted were African-American, explains Calderon. According to a recent U.S. Department of Labor’s National Agricultural Workers Survey, 78 percent of all U.S. crop workers were born outside the U.S., nearly all in Mexico or Central America. The legacy of our national labor policies, says Worker Justice Center of New York legal rights advocate Carly Fox, is that “we have Jim Crow alive and well in New York state in 2015.”

The New York Farm Bureau takes a different view of the situation, as does the Northeast Dairy Foods Association. The NY Farm Bureau says farms in New York pay an average agricultural wage rate of $12.15 per hour—NY Department of Labor statistics put the industry’s annual entry level earnings at $17,110, which works out to substantially less. In a statement, the NYFB also says it is “supportive of employees taking a voluntary day-of-rest each week.” And Northeast Dairy Foods Association executive vice president Bruce Krupke says his organization believes “employees are protected already.”

Overtime “beyond an eight-hour day in a 40-hour work week, collective bargaining rights and other mandates in the proposed omnibus farm worker legislation are not reasonable work rules on a farm,” the NY Farm Bureau's statement says. “Everyone who chooses to work in agriculture understands the hard work and time involved.”

The proposed legislation “would simply be bad for business, bad for agriculture and ultimately bad for employees,” the statement continues. Further, says Krupke, “We’re not seeing mass protests. Not seeing farm workers walk off the farm. There’s a big demand for farm workers. There’s a shortage, so those who are working there must be being treated fairly. We think this would throw the whole thing into chaos.”

Calderon disagrees. “This is not going to affect agricultural business in any significant way,” he says, explaining that there are small farm exemptions in the legislation. “Almost every other employee in the state is protected, guaranteed a day off [and] overtime wage standards, but farm workers are cut out of all these benefits, including workers comp,” says Jake Potent, Sen. Espaillat’s director of communications.

And there’s more than just pay at stake, says Fox. Agricultural labor issues, she explains, are strongly tied to immigration issues, given the background of New York’s farmworkers. Many of these workers are afraid to speak up for their rights, she says. “The collective bargaining piece is the most fundamental,” she says. “For me nothing else matters if they don’t have ability to negotiate collectively and be protected on that.”

So what are the prospects for passage of this legislation? It’s been introduced for five years running now, garnering support in committees but ultimately blocked from coming to a vote. Part of the problem, says Calderon, “is that farmworkers have no political clout and are a very vulnerable population. They’re out of sight, out of mind in terms of New York’s power base.”

The Senate bill has 28 cosponsors and is now with the Finance committee. “It needs 32 votes to pass,” says Potent. Whether this will happen before the 2015 New York legislative session ends on June 17 remains unclear. Neither Senate Majority Leader John Flanagan (2nd Senate District) nor Governor Andrew Cuomo’s offices responded to requests for their position on the bill by press time.

But the bill’s supporters, which include New York State AFL-CIO, don’t plan to give up their fight. “The struggle will not end and in fact it will intensify,” says Calderon. “It’s our number one priority statewide and will continue to bring our allies to the fore.”