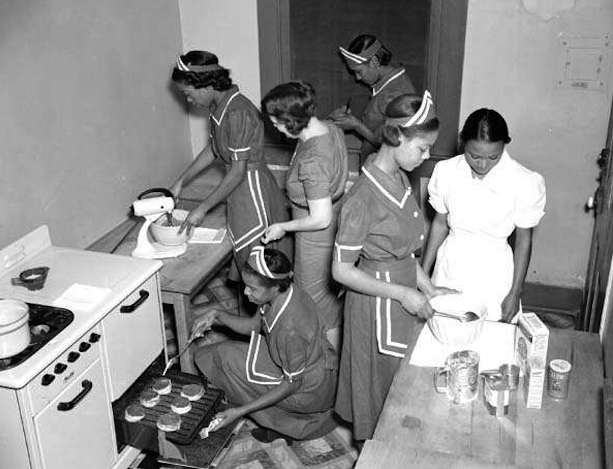 Domestic workers and their advocates have been making an increasing number of headlines since 2010, when New York became the first state to pass a Domestic Workers Bill of Rights. Guaranteeing overtime and time off, such legislation has spread to four other states and is being fought for in many more. But organizing around domestic work has been ongoing since at least the 1930s, an often forgotten corner of the labor movement.

The decades-long struggle for domestic worker protections, and for recognition of domestic workers’ basic dignity, is documented in Premilla Nadasen’s new book, Household Workers Unite: The Untold Story of African American Women Who Built a Movement. Nadasen, who is a history professor at Barnard College, provides a series of vignettes covering such periods as communist-led organizing in 1930s New York and the unsung domestic laborer activists of the Montgomery bus boycott.

Nadasen has a long history of activism as well, beginning during her youth in South Africa where she was involved in the movement against apartheid. Her previous book, Welfare Warriors: The Welfare Rights Movement in the United States, focused on the activists on the frontlines of radical organizing in the late 1960s and early 1970s in the wake of urban riots and social unrest that helped (briefly) galvanize increased federal largesse to poor families.

In These Times caught up with Nadasen to discuss the legacy of slavery in domestic work, the inequities of the Fair Labor Standards Act and what contemporary movements can learn from their forbearers.

What was the legacy of slavery in the domestic labor sector, especially in the first half of the 20th century?

After the end of slavery, African-American women increasingly became paid domestic workers. The image that came to dominate their labor in this occupation was the figure of the mammy, an African-American woman loyal to the family for whom she worked and happily served. The image of the mammy becomes essential in the early 20th century to justify an unequal racial order in the South and as an apology for slavery, with its assumption that African Americans were content to serve white families.

The reality is that their work was not treated as real work. They were very often framed by their employers as “one of the family.” That meant they would work longer hours and take hand-me-downs instead of payment because the assumption built into the “one of the family” phrase was that they were working out of love. But Carolyn Reed, an organizer in New York City, put it best when she said “I don’t need a family, I need a job.”

In the beginning of the book you talk about communists and other radical activists who tried to organize with domestic laborers. How successful were those 1930s efforts?

Considering that the occupation was so difficult to organize, I think they were enormously successful. They were isolated employees who often worked alone in a home and were invisible from the public eye and labor organizers. When communists, the Women’s Trade Union League, and the Urban League all decided to organize domestic workers, they actually brought these women together in a collective space. Sometimes they reached out to them in the “slave markets,” the name that Ella Baker and Marvel Cooke gave to these street corners in New York City where African-American women waited to be hired as day workers. The Bronx Slave markets became sites of organizing. Then domestic workers and their supporters developed hiring halls where domestic workers could be protected from exploitative employers.

With all this organizing were there any legislative victories at the local or state level?

The biggest victory at that time was when New York Mayor Fiorello La Guardia tried to end the street corner markets and regulate the hiring of domestic workers. The city of New York created hiring halls as well where domestic workers and employers could negotiate wages.

But then on the national level, they were left out of the Fair Labor Standards Act?

There were a number of exclusions from the FLSA, including agricultural and domestic workers. Both were sectors African Americans dominated at the time. There was a tremendous fear among Southern Democrats about granting minimum wage protections to African Americans and how that would disrupt the economics of the Southern social order.

Moving into the 1950s, how did the broader devaluation of work at home affect the wages and protections of domestic workers?

A couple of things shaped the valuation of domestic work. In addition to the African-American women who are the subject of my book, there were Puerto Rican and Chicana women, too. The racial composition of the workforce was part of the reason the occupation was devalued, and because of the association with women’s unpaid labor in the home. Women had been doing this work for centuries for no pay, and this further contributed to a notion that it wasn’t real work.

It goes back to the language of “care work”: If one does this kind of labor because they care it suggests that the reason they are doing it is because of an emotional connection, not necessarily for the paycheck.

How did the women’s liberation movement affect those dynamics? Were there instances where domestic laborers tried to build alliances with white middle white feminist movements? Or was there too much of a class divide?

Many who were a part of the women’s movement advocated leaving the home to secure job opportunities, and in making those arguments they very often denigrated domestic work. They talked about how domestic work, household work, was simply unfulfilling. That was very different from what domestic workers who were arguing for how and why it needed to be recognized as labor and paid adequately.

There were elements in the women’s movement who did ally with domestic workers. The National Organization for Women was one of those groups that thought the revaluation of domestic work would benefit both middle class women as well as domestic employees. There were socialist feminists or the welfare rights movement, both of which suggested the work done in the home was valuable and should be recognized and paid by the government. There were certain feminists who testified on behalf of Fair Labor Standards Act amendments in the early 1970s to include domestic work under the minimum wage laws.

Gloria Steinem was one of the most important. She agreed in the 1970s, after the passage of the amendments, to launch a campaign to encourage middle class women to abide by the new law and pay their domestic workers minimum wage.

What can the current domestic worker advocates learn from strategic successes and failures of past movements?

I see a lot of parallels between the domestic workers rights movement of the 1960s and 1970s and the contemporary domestic worker rights movement. Both have a notion of shifting the site of organizing away from the workplace into the public realm. Women like Dorothy Lee Bolden in Atlanta organized women on the buses; now Domestic Workers United in New York City organizes domestic workers in public parks.

Also, in the earlier period and the contemporary period, domestic workers did not advocate for protections from individual employers, because domestic workers changed employers so frequently. Instead, they advocated for the state stepping in and taking care of these workers who might be working for multiple employers. It’s important because workers would have these guarantees regardless of who they worked for, regardless of if they were part of the organization or the movement. It’s a different model of labor and union organizing.

I think there’s a lesson here not just for domestic workers. This occupation can offer some guidance about the contemporary moment, how workers in other occupations can begin to organize, whether Uber drivers or adjunct faculty. Models of labor organizing that have a broader vision of mobilizing workers not just based on their employer but their occupation.