Can the Fight for $15 Replicate Its New York Wage Board Victory Around the Country? 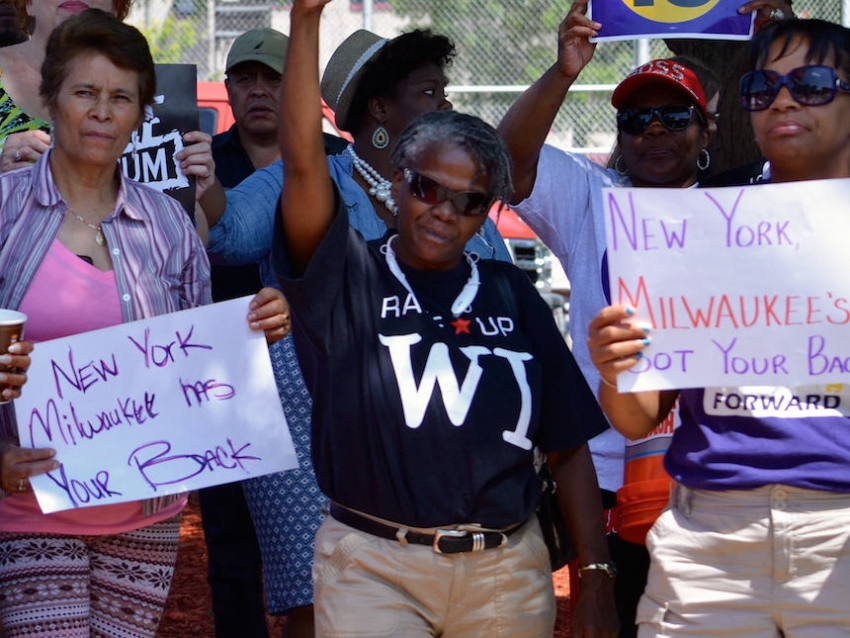 Wisconsin workers rally in celebration of a New York wage board's recommendation to raise the minimum wage for fast food workers to $15. While the wage board strategy is hardly a universal solution, there are possibilities for its wider use.   (Wisconsin Jobs Now / Flickr)

Fight for $15 has become the most high-profile segment of the American labor movement in recent years, helping shift public perception enough to secure minimum wage hikes in places as disparate as Chicago and Arkansas. But Fight for $15 hasn't had much luck actually making good on its titular promise of reaching a $15 per hour minimum wage, with the exception of wage ordinances in liberal urban enclaves like Seattle, San Francisco and Los Angeles.

At least, it hadn't—until May, when New York Governor Andrew Cuomo initiated a wage board whose recommendation of a $15 per hour wage floor for fast food workers has since been accepted and enacted by the state's Labor Commissioner. The victory—benefiting workers in both liberal urban and conservative rural districts—is the largest yet in the movement's effort to take $15 mainstream.

It should come as no surprise, then, that the campaign wants to replicate the wage board strategy wherever it can.

Mary Kay Henry, President of the Service Employees International Union (SEIU), which has been the principal financial supporter and organizer of Fight for $15, told Buzzfeed that the movement would seek "to set up wage boards everywhere in the country." Her colleague Hector Figueroa, the president of influential SEIU local 32BJ, echoed the sentiment in a subsequent TV interview, saying: "If we are to win, we have to replicate the strategy to raise the standards in other states." Dan Cantor, national director of the Working Families Party, felt the same way. "We're keen to see this replicated," he said. "It's huge."

And just last week, the campaign announced it would be holding "People's Wage Board" hearings in 30 cities around the U.S., though those boards' recommendations will not be legally binding.

The wage board—a process by which a governor calls a commission to investigate and raise pay for a given sector—is a vestige of New Deal progressivism. Though it is not a standing body, the wage board authority nevertheless serves a purpose identical to many of the government agencies born of that era: to protect working Americans from market downturns. With the ability to bypass politically fraught state legislatures, governors could ensure that wages kept up with the rate of inflation and rising costs of living; similarly, in cities where citizens have the political will to pass wage hikes, local governments wouldn't have to wait on state legislatures and governors for raises.

In New York over the past few decades alone, Gov. Mario Cuomo used a 1986 wage board to close loopholes in the state's minimum wage law and to bolster overtime rules; in 2009, Gov. David Paterson unilaterally raised the wages of tipped workers in the hotel and restaurant industries. Now, Gov. Andrew Cuomo has used the law to raise wages for fast food workers.

A wage board is made up of three, six, or nine members, as determined by the state’s Labor Commissioner, who also selects the board's members. Despite being able to alter the board’s size, the Labor Commissioner must give it a consistent makeup every time: one-third of its members represent business, one-third represent labor and one-third represent the public. After investigating the wages in a given sector, the board delivers a wage recommendation to the states’s Labor Commissioner, who can then accept, reject or modify it. At that point, he or she issues a wage order which, like any state regulation, goes through a notice and comment period before going into effect.

Because it must conduct a formal investigation of the sector in question, the wage board ends up doing what few other government agencies have been willing to do: actually listen to workers.

Over the course of four full-day hearings held throughout the state over the month of June, hundreds of fast food workers described the sheer impossibility of making ends meet on the state's $8.75 minimum wage.

"You could see how moved the wage board members were by the worker testimony," says James Parrot, deputy director and chief economist at the Fiscal Policy Institute, who himself participated in the hearings. "It really affected their ultimate recommendation of $15 an hour. ... The wage board and Governor Cuomo have been willing to do what federal and state legislatures have not."

The wage board, however, is no panacea. Wage boards are only on the books in New Jersey, Massachusetts and California. (Interestingly, Wisconsin had a board for decades until Gov. Scott Walker eliminated it in what Cantor calls "one of the more cynical moves from an uber-cynical politician." Connecticut also recently repealed its wage board authority.)

Due to these limitations, some think New York’s state-level wage board victory can’t be replicated anywhere else.

"I don't think a wage board strategy is very promising in the short term in New Jersey, Massachusetts or California," says Paul Sonn, general counsel at the National Employment Law Project, which has advised Fight for $15 since its inception. "The strategy works best in states that have a governor who is more progressive than the legislature," he adds. In those three states, the opposite is true.

Then again, with his ties to the development and finance industries, Andrew Cuomo is hardly a staunch progressive. "The governor did it because he needed a way to make the Left happy," says Cantor. A similar push from liberals in those other states might force their respective governors to make the kind of calculation that Cuomo did.

New Jersey, run by Republican presidential candidate Gov. Chris Christie, is likely a lost cause on this issue. Massachusetts and California, on the other hand, are already home to strong minimum wage campaigns. The Massachusetts legislature is considering a bill that would set a $15 per hour wage floor for both fast food and retail workers, a sector-specific strategy resembling the one used by New York's wage board.

California progressives, meanwhile, are seeking a statewide $15 per hour minimum wage referendum for the 2016 ballot. The initiative's proponents are counting on the relatively large, liberal turnout of the upcoming presidential cycle to take wages further than Gov. Jerry Brown would on his own.

Yet in both Massachusetts and California, a wage board may still come into play. Advocates could use the threat of a wage board campaign to gain support from each state’s Governor and his allies, who likely fear a potential targeted attack from the press-savvy Fight for $15.

But with New York governor Andrew Cuomo already having buckled under such pressure, perhaps the next target for a wage board campaign should be New York. Raising wages to $15 per hour for another sector would prove just how much the movement has grown beyond fast food. Since Gov. Cuomo recently came out in support of a  $15 minimum wage for the state, Fight for $15 plans to seek such a wage hike in New York's next legislative session, but the campaign understands that such an effort is likely to fall short in the state's Republican-controlled Senate. When it does, says an official at an organization involved with Fight for $15, the campaign will pursue a wage board review for multiple low-wage sectors. Another official who has consulted with the Fight for $15 coalition believes that, in such a case, the governor could call a wage board to implement the entire raise himself, effectively accomplishing the same thing as successful minimum wage legislation.

"The wage board fight didn't end at fast food," declares Ademola Oyefeso, Political Director for the Retail, Wholesale, Department Store Union (RWDSU). Back in July, Mary Kay Henry assured that, if necessary, the movement would "go sector by sector," but was unsure "if the governor [was] anticipating [that]." He better get prepared.

A broader wage board strategy faces the challenge of finding a legislature with members who are unable to pass a minimum wage raise, but nevertheless willing to empower a wage board to carry it out. "People's Wage Boards" might not be able to issue legally binding recommendations, but they could help build momentum around state-level hikes. And in red states where a state-level minimum wage hike is impossible, perhaps a wage board bill would appeal to moderate lawmakers who wouldn’t have to bear direct responsibility for the raise.

Ultimately, the success or failure of any forthcoming wage board strategies will rest on the workers themselves. "None of this would've happened without the workers being so organized," says Parrot. "This effort will go as far as they can take it."

Max Zahn is a freelance reporter in Brooklyn, New York.