Keeping the Memory of Working-Class Struggle Alive in Philadelphia 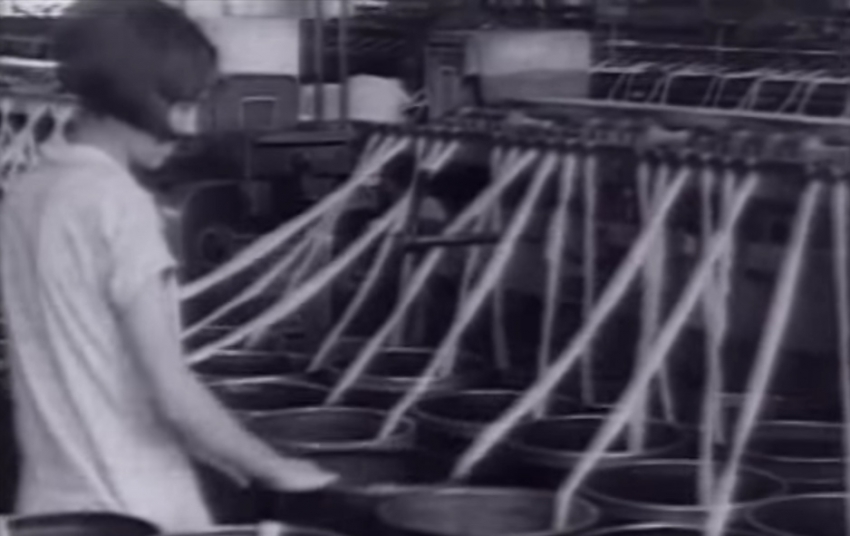 On Tuesday, as the rest of the city prepared to watch the Democratic Presidential debates, a handful of Philadelphians trickled into the Community College of Philadelphia’s Winnet Student Life Building. Even the spectacle of Bernie Sanders decrying capitalism in front of a live television audience could not wrench them from the biweekly ritual of the Philadelphia Unemployment Project’s (PUP) instructional film series on the history of class war in America.

PUP is a decades-old advocacy group that has attempted to combat the city’s chronic jobs shortage since the manufacturing sector began to shrink dramatically decades ago. The organization is led by John Dodds, whose grey hair is slicked to the back of his head, who has worked in the trenches since the oil recessions of the 1970s. The Americans in Struggle film series is his idea of a reminder that change does not come without terrible suffering and costly conflict. Pizza is also served.

The Winnet’s room S2-3 sports auditorium-style seating and the kind of collapsible wooden chairs that are usually only forced upon students. Judging from the predominant hair color in the room—grey, like Dodds’—the crowd probably hasn’t needed to grapple with such remorselessly uncomfortable seating for over half a century.

There are plenty of younger spectators too, despite the debate-thinned crowd. (Tuesday’s film only attracted 25 guests, but PUP’s Americans in Struggle series usually wins an average crowd of 45 and the total has at times reached 80 heads and filled most of the seats, according to Dodds.) A couple of the organizers of Philadelphia’s branch of 15 Now sit in the back of the room, nibbling at the complimentary popcorn and pepperoni pizza. North Philadelphia resident William Davenport, who works at a nursing home and sometimes volunteers with PUP, sat near the front, a couple cans of Sprite arrayed at his elbow for the movie ahead.

“The best one so far was [the Vernon Johns Story], that was a powerful movie,” says Davenport, referring to the first screening of a 1994 movie about the man who has been described as the father of the civil rights movement (James Earl Jones portrays him in the made for TV production). This year’s second showing, Harvest of Empire, a documentary about U.S. policies in Latin America and how they affect immigration to our borders, made an impression as well.

“It showed how [difficult] life is in Mexico, and now you have people like Trump saying we should build walls and all this,” says Davenport, shaking his head. “But things are so bad that if people can’t go over [the border], they’ll go under it.”

This week, the film in question was The Uprising of ’34, a PBS documentary about the massive textile workers strike that rocked several Southern states during the early New Deal. The film is not narrated professionally; instead, the entire story is told by the workers, mill owners and their children.

“It was on Labor Day of 1934 that I witnessed the closet thing this country ever had to a revolution,” one man says at the opening of the film. “The general textile strike was one of the largest strikes in American history.”

To the strains of banjo and fiddle music, the documentary describes the tight-knit but oppressive conditions in the mill towns. Owners exert authoritarian control over their workers, kicking them out of their jobs and homes (which the company owned) if they drink whiskey, don’t attend church or try to organize a union.

As conditions in the industry change and a textile glut develops, competition among the firms ratchets up to unbearable levels. Workers are forced to do the jobs of three people at once, one old unionist recalls. The new minimum wages set by the National Recovery Administration are not being paid. The horrible conditions in the mills end up inspiring between 300,000 and 500,000 workers to go on strike across the South and in some Northern states. Flying squadrons drive from town to town to rally support, bringing the industry to a standstill.

The images in the film seem to come from some pre-civil rights movement, with long columns of white people bearing placards (“Do We Look Like Outlaws”) march across the countryside singing “We Shall Not Be Moved.” (Black workers are rare in the mills at that time and they fear being lynched if they are considered pro-union.)

“It was a damnable outrage that something like this could happen in a civilized country,” one mill owner’s son recalls his father saying, as his workers take over the plant and shut it down. The mill owners get local authorities to deputize roughnecks, one of whom is seen loading a shotgun. Southern governors gleefully rally the National Guard and deploy the soldiers against the strikers.

Machine gunners are stationed at the entrance to the mills. At least seven people are killed, many shot in the back as they flee. One man is chased into his own home and stabbed to death with bayonets. The strike is soon broken in all but name, as the union leaders—who do not have the funds or infrastructure to support the hundreds of thousands of suddenly wage-less workers—agree to a settlement that supposedly allows all the workers go back to their jobs. In actuality, many are “Refused Re-Employment” by their vindictive bosses and expelled from their homes and communities.

After the documentary closes, a middle aged African-American man in the back of the room responds to the call for questions or comments. “I just sat back here are and almost cried a little bit. … I’m wiping the tears from my face and looking at a bunch of white people I don’t know, but I just felt an emotional attachment to them because of the struggles they were going through,” he says.

The room soon devolves into a back and forth about the role of the state in labor disputes. Isn’t the law supposed to be neutral, one woman asks. Another discourses on the history of the National Guard as a strike breaking force.

In the crowd is Lance Haver, a longtime Philadelphia activist and now city council’s director for public engagement. He dismisses the idea that the textile strike was a failure.

“The human cost of this ends up giving FDR the votes he needed,” argues Haver. “The arc of history is long. If you expect success in every struggle, in each moment, you’ll be disappointed. It’s really not that simple.”

Dodds stands at the front of the room, looking bone weary. Strikers may not be getting bayoneted to death anymore, but that’s at least partly because there are barely any strikers left anymore. The state, and the bosses, seem to have found quieter ways to keep people unorganized and vulnerable.

“There’s a whole history of the government and the states and the National Guard siding with the bosses,” says Dodds. “The bosses are very often in cahoots with the politicians. That was a pretty amazing attempt [in 1934], but that’s what we’re up against. Even today we have the same thing where the wealth controls everything. The people with money control everything.”