Govt. Report: Even After 2013 Texas Fertilizer Explosion, Hundreds of Communities Still at Risk 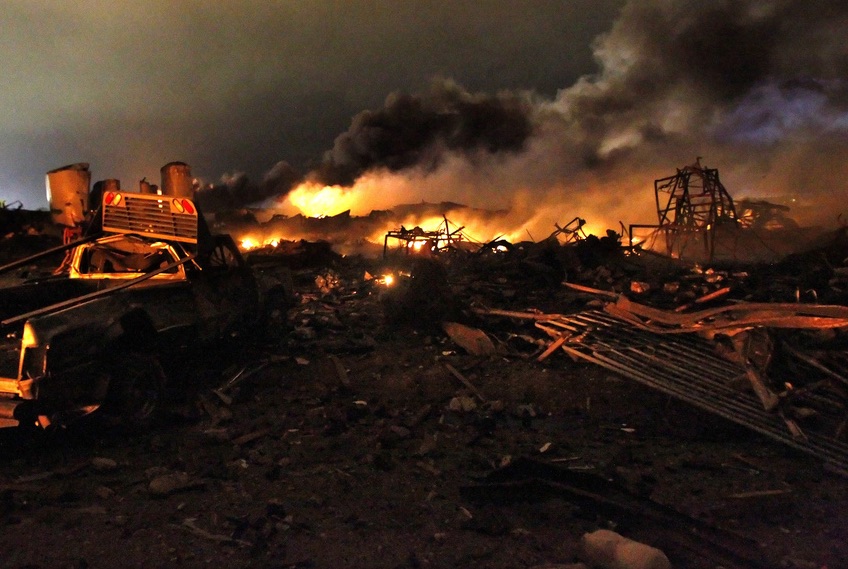 Much of West, Texas looked like a post-apocalyptic wasteland after the fertilizer explosion in 2013. But steps to prevent further disasters aren't being taken. (A Name Like Shields... / Flickr)

Nearly three years after a catastrophic explosion and fire fueled by about 30 tons of fertilizer grade ammonium nitrate ripped through the West Fertilizer plant in West, Texas—killing 15 people, including 12 first responders, and injuring more than 260 and causing extensive community damage—the Chemical Safety Board (CSB) has released and unanimously approved its final report on the incident. Presented at a public meeting in Waco, Texas on January 28, the CSB’s report found that “limited regulatory oversight, poor hazard awareness, inadequate emergency planning and the proximity of the facility to nearby homes and other buildings all led to the incident’s severity.”

In a statement, CSB Chairperson Vanessa Allen Sutherland called this “one of the most destructive explosions ever investigated by the CSB.”

The April 17, 2013, incident caused widespread damage to more than 150 nearby buildings, among them several schools, an apartment complex where the destruction killed two people and a nursing home, a number of whose residents were seriously injured. Despite this devastation, the CSB report finds that communities in Texas and elsewhere around the country remain at risk for similar disasters.

According to the report, more than 1,300 facilities across the country store fertilizer grade ammonium nitrate; 40 of those, which store more than 10,000 pounds of this material, are in Texas, and nearly half are located within half a mile of a school, nursing home or hospital. Eighty three percent of these facilities are within a quarter mile of a residence.

The final CSB report upholds what its preliminary investigation (which can be read below) found: that huge gaps in information available to both first responders and the community about the hazardous material stored West Fertilizer plant contributed to the loss of life, injuries and damage. These gaps included the failure of training and reference material to inform emergency responders about fertilizer grade ammonium nitrate’s potential to explode in a fire.

The report also points to a “lack of adequate federal, state or local oversight” on storage of fertilizer grade ammonium nitrate, including the fact that neither the U.S. Environmental Protection Agency (EPA) or the Occupational Safety and Health Administration (OSHA) risk or process safety management programs cover this explosive material.

“This tragic accident should not have happened,” said CSB Chairperson Sutherland in a statement released along with a video reconstructing the incident.

While the CSB takes federal, state and local authorities to task for failure to adequate management of this highly hazardous material, a representative for major unions says the report could have made stronger recommendations.

The CSB “report fails to make any specific recommendation to OSHA and EPA” on the need to “close the gap” in existing hazardous chemicals management rules currently don't apply to many “reactive chemicals,” including ammonium nitrate and others that behave like it, said Eric Frumin, health and safety director of the union federation Change to Win, whose members include the International Brotherhood of Teamsters, United Food and Commercial Workers International Union, Service Employees International Union and United Farmworkers of America.

Frumin points out that the CSB has been aware of this gap for more than 20 years. “We have a huge problem with many, many chemicals of which ammonium nitrate is only one that is highly reactive—and that have caused devastation in many cases,” he says. “There are many examples of companies not knowing how dangerous this is and not taking the right action because they’re not required to. It’s disappointing that the [CSB] board failed to address that issue when they issued this report.”

In fact, as the CSB itself pointed out in its preliminary findings on the West Fertilizer disaster, OSHA considered adding ammonium nitrate and other highly reactive chemicals to the list of substances that require process safety management plans in the late 1990s but shelved the proposal in 2001. Although the CSB recommended in 2002 that EPA and OSH include these chemicals in safety planning, neither agency has yet acted on this recommendation.

Frumin also points to the fact that the effort to address risks posed by hazardous chemical facilities set in motion by President Barack Obama’s Executive Order 13650, issued in August 2013 in response to the West Fertilizer disaster, has also thus far failed to substantively or fully address this issue.

The EPA, OSHA and the Bureau of Alcohol, Tobacco, Firearms and Explosives have since issued an advisory on the safe handling and storage of ammonium nitrate. EPA has also proposed adding ammonium nitrate to the list of chemicals that require a company using or storing the material to develop a risk management plan, but that rule has not yet been finalized.

The executive order directed federal agencies, among them the EPA and OSHA, to improve the safety of facilities that use and store hazardous chemicals. While the working group of agencies have issued status reports, most recently in June 2015, accidents involving hazardous chemicals continue to occur with alarming frequency. In the first month of 2016 alone, there have been at least two dozen such incidents that have injured and hospitalized dozens of people and killed at least three.

This suggests that little may have changed substantively since December 2014 when the Senate Environment and Public Works Committee held a hearing reviewing progress made by federal agencies since President Obama’s Executive Order. At that point, Sen. Barbara Boxer (D-Calif.) noted, “In the 602 days since the West, Texas tragedy there have been 355 chemical accidents resulting in 79 deaths and 1500 hospitalizations,” or about one incident involving hazardous chemicals every other day.

This number also coincides with EPA’s estimate of “approximately 150 catastrophic accidents” per year at facilities considered “high risk” because they use or store hazardous chemicals and are located in populated areas.

Greenpeace toxics campaign legislative director Rick Hind points out that the NGO Coalition to Prevent Chemical Disasters has been meeting and corresponding with EPA over these issues for years, dating back to before the West, Texas disaster. Calling the EPA’s actions to date “disappointing,” Hind said, “It is now up to Obama to live up to his promises and legacy on chemical plant disaster prevention.”

Hind explained that some industries, like wastewater treatment, have begun to shift away from their use of highly hazardous chlorine and that when it comes to ammonium nitrate, it now represents but a tiny and shrinking fraction of types of fertilizer used. This, he said, shows that eliminating risks posed by storing large amounts of highly reactive chemical is not impossible.

“The CSB’s goal is to ensure that no one else be killed or injured due to a lack of awareness of hazardous chemicals in their communities,” said CSB Chairperson Sutherland. “If adopted, the Board’s recommendations can help prevent disasters like the one in West, Texas.”

As hazardous chemical incidents continue on an almost daily basis, those concerned may want to keep an eye on the West Fertilizer Explosion and Fire recommendations tally the CSB has posted on its website. As of February 1, 2016, 100 percent of the report’s 19 open recommendations have not been fulfilled. Meanwhile, between Thursday night when the CSB board approved the report and Monday morning, the CSB recorded two more incidents involving release of hazardous chemicals.