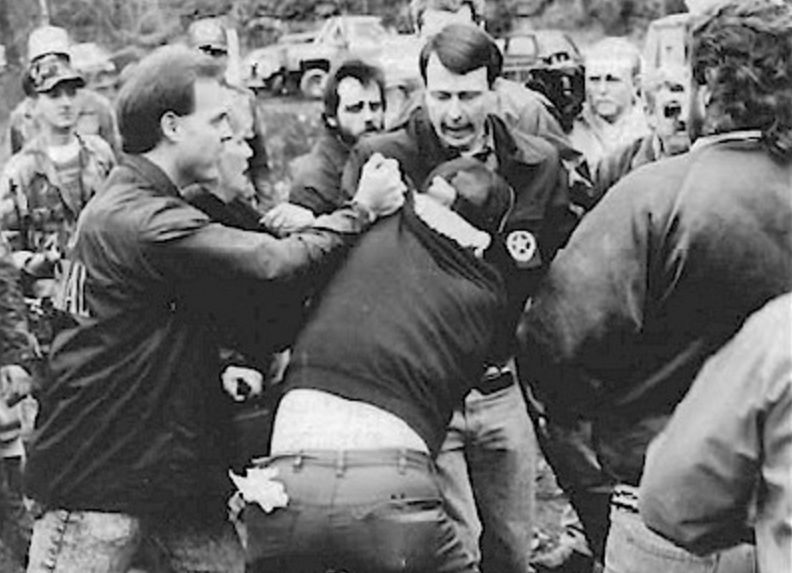 U.S. Marshalls arrest a Pittston coal miner during the United Mine Workers' 1989 strike, which took place in Virginia and West Virginia. (U.S. Marshalls)

The most important election in Virginia this year has no candidates on the ballot.

On February 2nd, the Republican-dominated General Assembly passed the two-session threshold needed to put the open shop before the Commonwealth’s voters in November. You might be asking yourself, “Wait. I thought that Virginia was already an open-shop state?” Your inclinations would be correct: legislation barring union membership as a condition of employment was signed into law by Gov. William Tuck (a later adherent to Massive Resistance in response to Brown v. Board of Educationas a member of Congress) in 1947. As a result, Section 40.1-58 of the Code of Virginia reads:

It is hereby declared to be the public policy of Virginia that the right of persons to work shall not be denied or abridged on account of membership or nonmembership in any labor union or labor organization.

So why do this? The easy answer is that Virginia Republicans are fearful that, should the open shop meet a legal challenge in state court, Democratic Attorney General Mark Herring would not seek to defend it. The sponsor of the bill and defeated 2013 nominee for Attorney General, State Sen. Mark Obenshain (R-Harrisonburg), stated as much in the deliberations on the bill. In addition, should the Assembly find itself in pro-labor hands in the future, they could overturn the open shop with a simple majority vote. Never mind that the extreme amounts of gerrymandering in the Assembly (particularly in the House of Delegates) makes a unified Democratic state government unlikely for decades to come.

The vote this November will be the first popular referendum on the open shop since 54 percent of Oklahoma voters approved State Question 695 on September 25, 2001. In this, an opportunity presents itself to the labor movement in this country, and it is one that labor unions must take.

In the fifteen years since the Oklahoma referendum, every open-shop law has been passed through state legislatures. This, of course, advantages corporations and anti-worker conservatives as they can flood state capitols with their donations and their lobbyists at a relative distance from public scrutiny. Combined with the gerrymandering described above which ensures that an anti-worker vote will not result in the loss of an election, the deck is often stacked far too high for labor advocates to overcome. The only hope for those who live in the thirty states with a Republican legislature is the presence of a pro-labor governor and legislative procedures that require a higher threshold than a simple majority to override a veto.

West Virginia workers just found out what happens when you have the former, but not the latter.

There are demographic reasons to feel good about this campaign: 18-34-year olds are the generation most supportive of labor unions, and Black workers have both been more supportive and more eager joiners of labor unions than their white counterparts. Virginia has been a prime destination for young people over the last couple of decades due to the economic boom occurring in Northern Virginia, and the state has always had a large number of Black residents.

But the campaign against the open shop this fall cannot rely on demographics to save it. Given the opportunity that labor unions have with this referendum, the goal should not simply be to win: it should be a realignment of the conversation surrounding the role in labor unions in Virginia’s—and America’s—political economy.

There have been many issues stemming from the precipitous decline in union density in this country. The stagnation of working people’s wages, widening inequality, and a sense of alienation and disillusionment amongst the working class can all be tied back to the decline of organized labor in the United States.

But there’s another thing that declining union membership has produced, and it is, perhaps, the greatest victory of all for capitalism: the sense that, rather than being a representative of America’s working class, unions are no different from any other interest group. Former Vermont Gov. Howard Dean sought to mobilize this sentiment recently in support of Hillary Clinton’s presidential campaign when he stated that “[Democrats] don’t go after” political donations from labor unions because “labor unions are Super-PACs that Democrats like”.

(It should be noted, of course, that the only union that has spent any significant money on Bernie Sanders’s behalf is National Nurses United. It appears that only Hillary Clinton will protect us from Big Nursing and the Caregiver-Industrial Complex.)

Part of this has been on the labor movement: too much money, time, and energy has been devoted to electing Democrats at all costs to federal office, even when they are absolutely terrible. But most of it has been a concerted effort by neoliberals in both parties to erode unions’ once formidable approval ratings by associating them with the most unsavory parts of the legislative process. How unsavory? In 2013, Gallup polled Americans on the honesty of several professions. Those who engage in lobbying, a key part of the legislative and policymaking work that any interest group engages in, were at the bottom with a six percent approval rating. By comparison, an August 2015 Gallup poll saw 58 percent of Americans approving of labor unions, with 37 percent believing that they should have more influence.

[W]hen a respondent moves from unsorted to sorted, he is much more likely to move his ideological beliefs into alignment with his partisanship than the reverse, strongly suggesting that party is the key causal variable.

Therefore, when working-class Republicans think about labor unions, they are less likely to consider the fact that union members make 21 percent more than non-union members or that 29 percent more civilian workers have access to retirement plans if they are a member of a labor union. No, they are more likely to think about Democrats receiving 89 percent of the donations given out by unions in 2014. The fact that the last two Democratic presidents have supported trade deals that acted as accelerants on the continued deindustrialization of America certainly does not help matters at all.

But the labor movement has been given a golden opportunity in 2016, and it is one that should not be passed up: the opportunity to engage in the largest labor education program that this country has ever seen.

Over the next eight-and-a-half months, unions should be running ads that focus on the specifics that so many American labor ads skirt around.

That last point is important, because it is how we will begin to develop the culture of unionism that we so desperately need in the South. It is important to ensure that the positive feeling that today’s youth have towards labor unions does not turn into anti-labor sentiment through a lifetime of one-way conversation dominated by capitalists and their PR lap dogs like Rick Berman.

But for this to be successful, all hands must be on deck. Virginia is one of a couple of states where such a measure could be defeated at the ballot box (the other, for my money anyways, being Kentucky), and it must be. Defeating this referendum must become the labor movement’s number one priority in 2016, even more so than the presidential election. In the piece I wrote about labor’s engagement in party politics, I stated:

If the labor movement must invest in politics, it would be wisest to do so at the community/local/state level. It is there, our ‘laboratories of public policy’, where the labor movement can have the most positive impact on the lives of working people.

There is no time like the present for the labor movement to take this advice to heart.