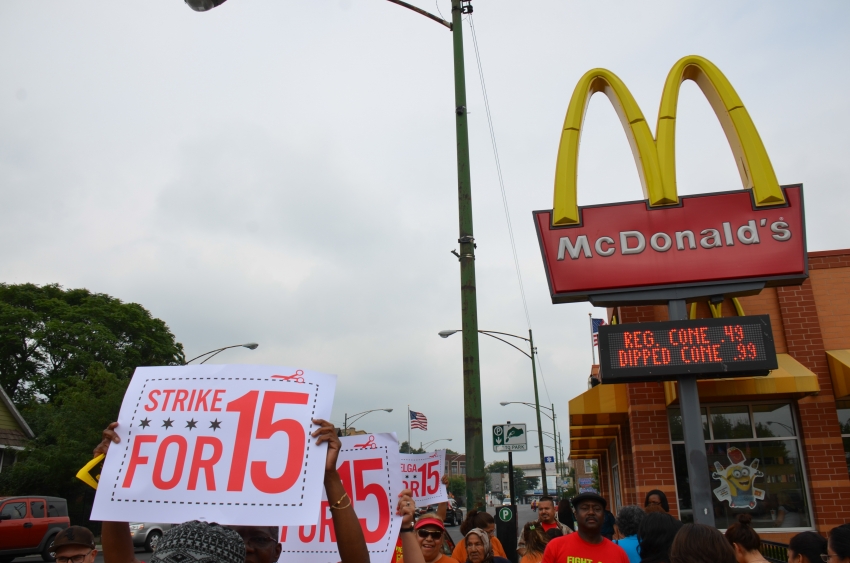 As dawn was breaking today, a crowd of roughly 100 gathered in Chicago around a McDonald’s restaurant in the largely black, working-and middle-class residential neighborhood of South Shore.

They were part of an international wave of protests, which started in New York City during November 2012 as protests against fast food shop working conditions. In these early actions, fast food workers walked off the job, usually without warning, and often with only a fraction of workers joining protestors outside. Most of the strikers returned the next day, often accompanied by supporters to guarantee their right to their jobs.

Those insurgent disruptions expanded into Chicago, then other cities, as the local fights coalesced into the Fight for 15—$15 an hour minimum pay and the right to form a union. Now there are simultaneous actions around the world, well-organized and publicized like the global protests today.

Organizers of the campaign, primarily a project of the Service Employees International Union (SEIU), said it would be the largest yet. Equally important, the campaigners have taken on a new but widely expected central focus—McDonald’s.

McDonald’s is both the public image of the low-wage service industry (customers get “McJobs” for the economy with their burgers and fries) and the single most influential corporation in the sector.

McDonald’s is also a good target because it is vulnerable. Its corporate plate is overloaded with problems, from depressed sales to lawsuits and investigations in Europe and Latin America. Sitting down to negotiate better relations with workers and their union could be a smart business move. It may even prove necessary if the National Labor Relations Board rules, as expected, that the corporation is a joint employer along with franchise owners.

The protests also demonstrate that the Fight for 15 has taken on much more ambitious goals in terms of attracting allies and embracing goals of both fast food workers and the allies.

By striking just before federal income tax returns are due, the Fight for 15 calls attention to the low wages of millions of workers but also the reasons for cheer at the recent victories in raising wages for many of the nation’s worst-paid workers.

Although the wage gains have not come as a direct result of unionization and contracts, the Fight for 15 clearly inspired the crucial political momentum behind a historically unprecedented rise in minimum wage hikes around the country in the past few years.

According to the National Employment Law Project, since November 2012, nearly 17 million workers have received wage increases, largely from public policy actions from city to federal levels of government. Some have been widespread in their impact, some narrower in scope and set below $15 an hour.

The changes generally came first in some big cities, like Seattle and Los Angeles, then in a variety of narrower public jurisdictions or categories of work (such as federal contractors in some areas), with a few major corporations, like Facebook, Ikea, Walmart and McDonald’s, voluntarily raising their minimums above the legal floor for full-time jobs but below $15 minimum.

Most dramatically, the big states of California and New York last month approved legislation that will phase in a statewide minimum wage of $15 an hour for 10 million workers, giving raises of about $4,000 a year to about one-third of the state workforces.

About 10 million, or 59 percent, of the workers receiving wage increases will see their pay gradually rise to $15 an hour, making it effectively the yardstick for the future. That is likely to mean that many areas with extremely low wages will be slow to reach the target. (It is also inconvenient for unions such as SEIU that are endorsing Hillary Clinton, since it makes her proposal to raise the minimum to $13 an hour an exhibit of excessive caution rather than her vaunted realism. “Both Democratic candidates are competing for the support of voters paid less than $15, a powerful new bloc,” reads one Fight for 15 press release.)

The Fight for 15 is becoming a central organizing force in many coalitions of community groups, unions and others with an interest in improving the lives of low-wage workers and their families. Workers with varied relationships to McDonald’s joined the march in Chicago on April 14:

After leaving McDonald’s, the marchers headed east, chanting: “We want respect / Put $15 on our check,” then passed a child care center, where some marchers urged caretakers to join them. Finally, they arrived at Bradwell Elementary School, where the Chicago Teachers Union and Fight for 15 embraced each other’s goals, as they had during a one-day CTU strike on April 1.

The marchers carried several large numerals that are keys to their biggest contemporary alliances of people, organizations and demands: 15, standing for the Fight for 15 movement; and 368, standing for the $368 million that the Fight For 15 figures would be saved by the state government if it did not have to pay for various public assistance programs for which low-wage workers in the fast food industry are now eligible, but could provide out of their own income if they earned $15 an hour.

The $368 million saved on the public assistance, at least in theory, could then be spent on improving (and keeping open) the neglected (and often closed) neighborhood schools, such as providing after-school activities for children. Or the money could be spent on maintaining and improving the city’s neighborhood infrastructure. But if fast food workers are paid sub-subsistence wages, it adds to the city’s money problems. As one picket sign read, “McWages Hold Chicago Back.”