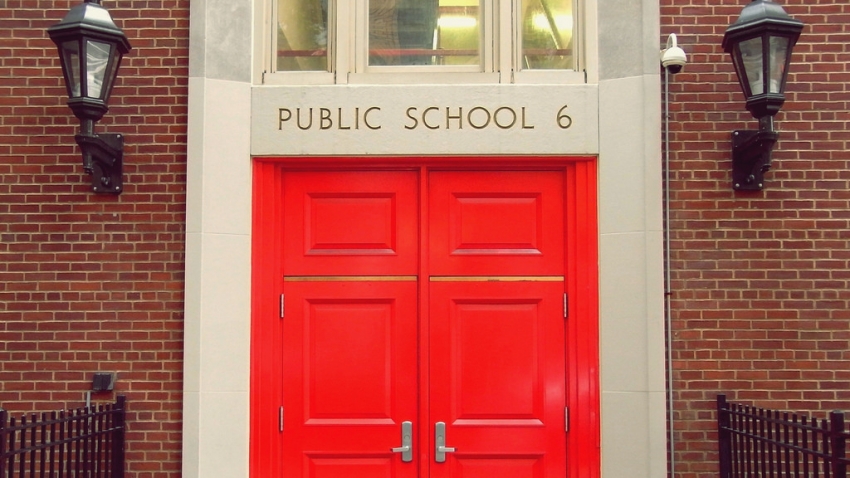 Elections in the New York City's United Federation of Teachers (UFT) have revealed a growing challenge to the union leadership from rank-and-file teachers demanding a more militant stance against corporate education reform. Union president Michael Mulgrew was re-elected with 76 percent of the vote.

But the dissident union group Movement of Rank-and-File Educators (MORE), of which I am a member, earned our first seats on the union's executive board since forming in 2012—an important foothold for an emerging rank-and-file challenger.

To start with, Jia Lee, our presidential candidate, garnered 10,743 votes, the first time an opposition candidate topped 10,000 votes in five election cycles. Lee contrasts starkly with Mulgrew in politics and style. After getting her start in union activism as a school-based chapter leader, her organizing as both a teacher and a parent propelled her to the national spotlight as a voice against corporate education reform. She has declared herself a “conscientious objector” to high stakes testing, refusing to give the 2014 Reading and Math exams. She testified before a Senate subcommittee on the negative impact of testing on students, and argues for the union to take a stronger stand against corporate reform generally and high stakes testing in particular.

Within MORE, she has emerged as a powerful leader, uniting union members, parents and activists from diverse backgrounds.

The movement against high stakes testing is a bright spot on the landscape of American social protest. In the state of New York, tens of thousands of parents have “opted out” of allowing their students to sit for the state's Reading and Math exams. The movement can claim some victories, including forcing the state to cancel contracts with corporate testing giant Pearson and the temporary suspension of using of test results in teacher evaluations.

Such a defiant and widespread movement should put wind in the sails of an insurgent movement of teachers against privatization and corporate control of education, if the union were to seek alliances with parents and students.

As it happens, however, Mulgrew refuses to support the opt-out movement and viscerally defends the controversial Common Core Standards. He once memorably threatened to “punch in the face” anybody who would try to take them away, and has defended a raft of corporate-backed reforms that came with Obama's “Race to the Top” program—most notably the use of discredited test-based “value-added” measurements of teacher effectiveness in teacher evaluation.

This has created space for MORE to define ourselves clearly as the “opt-out party” in the union, taking the lead in building solidarity with parents resisting excessive testing when our own union won’t.

The rollout of New York City's convoluted teacher evaluation system, designed by current national Education Secretary John King, has been predictably inept, leading the state Board of Regents to temporarily suspend the use of reading and math exams in teacher ratings. Then in May, as union ballots were mailed out, a New York State Supreme Court judge ruled that “value added modeling” based on test scores yielded “arbitrary and capricious” results, calling into question the future of test-based teacher evaluation in New York.

These various reversals have exposed the UFT as having taken the wrong side in key education debates, and left them awkwardly defending policies that are quickly discredited.

While the evaluation system has failed in its own terms at measuring “teacher effectiveness,” it has partially transformed the classroom through tighter regimentation of teachers’ work. In addition to the use of test scores to measure teachers’ “output,” school administrators evaluate lessons they observe through a rubric, scoring teachers in a number of “domains” that purport to measure intangibles like the “depth” of the questions they ask their students or their effectiveness at “creating an environment of respect and rapport.”

Teachers bristle at supervisors spending 15 minutes in their classrooms and then reducing their work to a four-point metric, and often feel that despite the system’s pretentions to objectivity it is too easily wielded in an arbitrary or vindictive way by their supervisors.

Many members are also angry about the contract the union signed in 2014, which not only codified this disastrous new teacher evaluation system, but also made a number of important economic concessions. Retroactive pay owed to teachers over the five years they worked without a contract under the hostile austerian mayor Michael Bloomberg was delayed further, stretched out into installments to be paid out incrementally over the course of years. Teachers will not see the full sum of money owed to them for the years they worked in 2009-2014 until 2020.

Those who leave the system will receive nothing. (This was grotesquely justified by union leaders as an incentive to halt the “teacher exodus,” the massive flow of members leaving the system due to poor working conditions and escalating cost of living in New York City.) The union also committed to finding cost savings in health care, which has led to increased co-pays for many important medical services.

MORE has pledged to replace “closed door negotiations” with a mobilized membership and more transparent process for negotiating the next contract in 2018 as part of a wider agenda to democratize the union, looking towards models of “open bargaining” that bring parents and students to the table and trying to reenergize member participation at all levels of the union.

There are many hurdles facing opposition candidates in the UFT, but they spring from two sources: the size and complexity of the school system, and the union's monolithic political culture.

The union bureaucracy, represented politically by the Unity Caucus, has an uninterrupted history of leadership dating back to the 1960s. Members of Unity agree, in exchange for access to union jobs and other perks like free trips to the national AFT convention, not to criticize union leadership or dissent from official Unity positions. They maintain their hold politically through union rules that allow 60,000 retirees, many of whom live out-of-state and don't work under the terms of our contracts, to vote for union officers. Retirees have a higher rate of voter participation than the active membership and overwhelmingly favor the incumbent—the majority of Unity's votes in recent elections have come from the retiree division.

Historically, dissident movements within the UFT have been scattered across numerous small opposition caucuses and grassroots activist groups, frustrated by the ruling party's hold on power. MORE was formed in 2012 as fusion of these rival groupings with a younger generation of teachers drawn to the union through social justice organizing.

This year, the New Action caucus, which had in the past cross-endorsed Mulgrew as their presidential candidate, broke ranks and joined MORE, endorsing Lee instead. For all the difficulties inherent in uniting fractious communities of union militants and social justice activists across ideologies and generations, building a united opposition movement in one of the largest union Locals in the country is one MORE's signal achievements.

A united opposition left us better equipped to answer organizational challenges stemming from the sheer scale of the task: A full electoral slate includes not only the 12 officer positions like President or Secretary, and 48 candidates for the executive board, but also 750 delegates who represent the UFT to its national affiliate the American Federation of Teachers. To appear on the ballot, each candidate must collect at least 100 signatures, or 900 for officer positions.

Approximately 100,000 in-service members are scattered across 1,700 schools in New York's five boroughs, separated by level and job title into divisions, each with its own electoral list and ballot. There are also thousands of members outside the Department of Education including charter school teachers, home care nurses, administrative law judges and others working for different employers under different contracts.

All told, over 189,000 ballots were mailed to UFT members. For a scrappy activist group without access to the union machine, reaching even a substantial minority of the members is a heavy lift. Opposition activists scrambled from school to school for weeks, stuffing mailboxes with union literature and talking to members about the election.

Another obstacle is the palpable disengagement and apathy among the union membership resulting from concessionary bargaining and a stale internal culture. Our growing opposition movement should be welcomed by all parties in the union as a sign of life. Turnout in UFT elections has been dropping steadily for years, and while this year a dismal 24 percent of the union voted, this is an improvement from 18 percent in 2013—the year retirees surpassed active teachers in overall vote share. Such numbers are not indicators of a lively internal culture.

For MORE, increasing voter turnout was an important strategic goal. In a union where retirees play an outsized electoral role, the only path to victory is mobilization of opposition votes among active school workers. But more than an electoral calculation, it was an opportunity to build infrastructure, recruit activists and reinvigorate discussion in the schools about the direction of the UFT.

Many teachers feel the union does not represent them; we have seen their working conditions deteriorate under the weight of accountability mandates, testing and bureaucracy, and are frustrated at a lack of support when we need it in the workplace. The opposition’s best results came from schools where our members are known and respected activists, doing the daily work of organizing and representing members.

Our profession has withstood a constant barrage of attacks from anti-union politicians in both parties and corporate school reform campaigners bent on abolishing job protections, reducing teachers’ voice in the schools and removing the last barriers to privatization of the public school system. If we are going to build an organization that can withstand the kind of threats posed by anti-union campaigns like the recent Friedrichs Supreme Court case, it will require a different approach than the purely legalistic strategy that the UFT is currently wedded to. We need to empower educators as their own advocates by transforming the union into a social movement for economic and social justice, and we need to situate our critique of education reform in a wider critique of power, inequality and racism.

While modest victories are important validations and signs of growth, a small minority of Executive Board positions add up to little more than a seat at the table. It would be a mistake to focus too much effort on trying to maneuver within the rarified world of catered meetings with the union executives. More important is to spend the coming years building union chapters at the school level, enforcing the contract, pushing back against privatization and supporting the opt-out movement while proposing a vision for teacher unionism that confronts education reform rather than adapting to it. That’s exactly what MORE plans to do.

Kevin Prosen is a teacher in New York City and chapter leader in the United Federation of Teachers.