On Trade, Our Choices Aren’t Only Xenophobic Nationalism Or Neoliberal Globalization 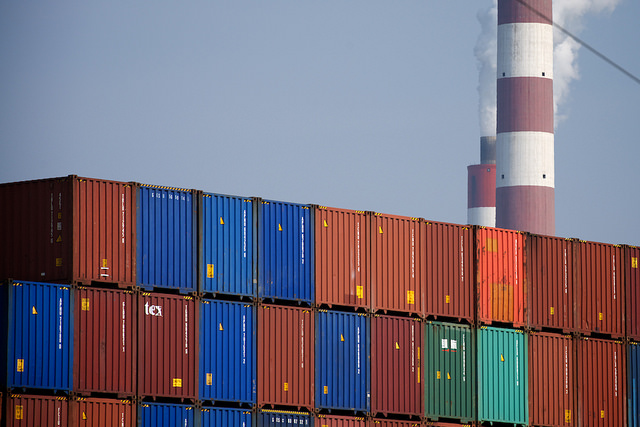 In an age of transportation and communication revolutions, geography proved less and less a haven for higher-cost home producers against distant competitors. (Zixi Wu/ Flickr)

Few issues are receiving a more insipid—and thus more harmful—treatment in our public discourse than world trade.  Along with immigration, “free trade” is now the foremost symbol of a supposed either/or choice between globalism and nationalism.

“Globalists” generally hail the liberal marketplace as the engine of economic prosperity and assail its critics as uneducated and irrational isolationists, while “nationalists” instinctively identify trade with economic decline (or at least the loss of good working-class jobs), rising inequality and a general loss of control over the future.

As CNN host Fareed Zakaria put it after Britain voted to leave the EU, “the new politics of our age will be not be left versus right, but open versus closed.”

This framework risks closing off our best possibilities for building a progressive economic future. We need a new paradigm.

Some historical perspective is first in order. That is the only way to account for the fact that those forces—call them white working class— today most deeply resentful of the open market were among its loudest champions during the first three decades after World War II.

The wartime Bretton Woods agreement together with the immediate post-war Marshall Plan reintegrated the Western-plus-Japanese economies on the basis of stable currencies, expanding markets and political democracy. After the catastrophe of Nazi-era cartels and hyper-nationalism—including the United States’ own notorious Smoot-Hawley Tariff Act, which set barriers of up to 59 percent on imported goods—Western workers, generally well-organized in trade unions, felt as much stake in the rising tide of economic growth as did their bosses. A slick pamphlet designed for mass distribution by the American Federation of Labor in 1947 heralded “The Promise of Bretton Woods—5,000,000 Jobs in World Trade.”

In these early years of globalization, what we today call the Global South mattered mainly as sources of cheap raw materials or as markets for Western-produced goods. In hindsight it is easy to see how the global system that so long fed American middle-class prosperity came back to bite it, once poor countries (in alliance with multinational corporations) developed their own manufacturing platforms.

In an age of transportation and communication revolutions, geography proved less and less a haven for higher-cost home producers against distant competitors—and, to be sure, not even that distant. By the NAFTA era of the mid-1990s, U.S. workers were making ten times the average wage of their Mexican counterparts. If placed in direct competition, how could they possibly hold onto their jobs?

The question remains, however, how best to tackle the negative effects of globalization without upsetting the entire applecart of world trade? Oddly, most other problems of world economic integration have found solutions through compromise, whereas trade has remained the province of extreme either/or.

In finance and currency crises, for example, the International Monetary Fund and/or World Bank regularly intervene to protect a national currency from abrupt free falls. In oceanic mining and fishing, worldwide agreements limit territorial overreach to prevent the exhaustion of vital resources or whole species. However inadequately, even on the climate crisis, world powers have accepted the principle of limits and the need to discipline fuel consumption and carbon output.

Yet, there is no such movement towards an adoption of mutually-agreed international principles on matters of trade. In a politically suffocating manner, one is either pro-free trade (most big business and most Clinton-Bush-Obama policies), anti-free trade (Donald Trump with a proposed 45% tariff on China) or stumbling in the middle (pro-then-anti-TPP Hillary Clinton). The Trans-Pacific Partnership, in particular, attempts to overcome First World skepticism with side agreements on labor, affecting workers in Vietnam, Malaysia, and Brunei, but the record of enforcement for such guarantees is spotty at best.

The options here present a silly, self-defeating set of choices and one that both workers and consumers in the United States and Europe need quickly to transcend.

Interestingly, as early as the time of Bretton Woods, there were voices calling for a better international architecture when it came to world economic integration. The left-of-center Congress of Industrial Organizations (CIO) even got initial support from the administration of Harry Truman for the creation of an International Trade Organization (alongside the IMF) that would coordinate further bilateral or multilateral trade openings with tangible commitments regarding employment, development, and investment. Hopes for the ITO collapsed when conservative Republicans captured the Congress in 1950. No similar idea has been seriously considered since.

In the spirit of the ITO, we need a return to the quest for a new world order as undertaken at Bretton Woods, but this time with a more encompassing agenda. Not just financial stability, but the regulation of trade and debt must be on the agenda. Global exchanges should yield equitable employment as well as enhanced bottom lines.

In the case of proposed NAFTA or TPP-type agreements, one could imagine an actualized ITO insisting on a step ladder of wage increases in the cheaper-labor countries as well as plans for displaced workers in the higher-wage countries before approving massive shake ups. In return, poor countries could count on significant debt relief.

Absent a move towards what we might call progressive internationalism, we are forced to choose between “globalists,” heedless of the consequences of development for those outside the professional and financial classes, or “nationalists,” suspicious of and hostile towards the world beyond our borders. Neither posture holds out much prospect for economic renewal, either at home or abroad.