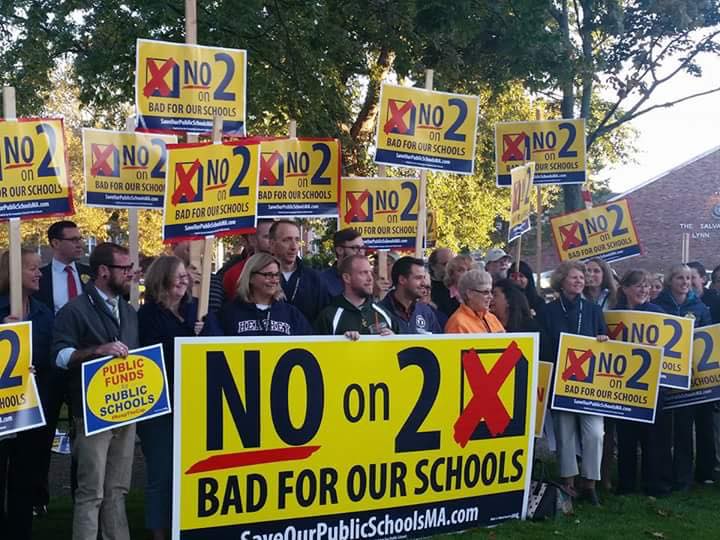 The state law that caps the number of charters allowed at 120 has made it more difficult for a market-driven reform agenda to take hold in Massachusetts like it has in many other states. (Save Our Public Schools/ Facebook)

Millions of dollars of dark money are streaming into Massachusetts as charter school proponents try to pass Question 2, a contentious ballot measure that would raise the state’s existing cap on charter schools. Teachers unions are scrambling to fight back against what they say is a heavy-handed attempt to dramatically expand public charters while hanging underfunded, traditional public schools out to dry.

Such fights are playing out across the country as the well-funded charter school network has turned its sights—and its millions—on state and local education politics. But Massachusetts, with its strict cap and accountability measures for charters, coupled with a rich tradition of public education, has long been the crown jewel for charter backers.

“They have targeted Massachusetts with the idea that if they can win here, it makes the road to privatization across the country easier,” Massachusetts Teachers Association President Barbara Madeloni says. “Blowing this up would really be a feather in their cap.”

The state law that caps the number of charters allowed at 120 has made it more difficult for a market-driven reform agenda to take hold in Massachusetts like it has in many other states. That’s not for a lack of trying though. Republican Gov. Charlie Baker and his allies want to lift that cap and allow as many as 12 charter schools to open or expand enrollment each year. After a highly-contested attempt to do so in the legislature was blocked in 2014, charter proponents launched a campaign to get the issue on the 2016 ballot.

Supporters of the pro-charter measure had also filed a lawsuit challenging the constitutionality of the cap, however, as The Boston Globe reports, on Tuesday a judge threw out the case, declaring that the state has a right to protect the financial well-being of its public schools.

Opponents of the measure, which include teachers unions, believe that lifting the cap would increase the fiscal strain on school districts that are already underfunded by some $2 billion. Existing charters drain $400 million a year from traditional public schools.

In addition, despite nascent organizing efforts by unions, charter teachers are typically not unionized, which means that allowing a flood of new charter schools to open could be a backdoor way to undermine teachers unions. Teachers unions are also concerned that while state law requires public school teachers to be certified, there is currently no such requirement for public charter teachers.

“Does that mean as charters expand that the professionalism of the teaching force is going to decline because requirements are far less in charters?” asks Gosnell.

All told, ballot committees supporting the measure have raised more than $15 million, with supporters having pledged to spend as much as $18 million by Election Day. Big donors include former New York City Mayor Michael Bloomberg, who gave $240,000, and Jim and Alice Walton, heirs to the Wal-Mart fortune, who gave $1.1 million and $700,000 respectively. As The Boston Globe reports, several top financial executives in Boston, including from Mitt Romney’s former employer Bain Capital, have pumped hundreds of thousands into the campaign as well.

The vast majority of money behind the campaign is funneled through dark-money groups that are not required to disclose their donors. The primary vehicle for that money is Great Schools Massachusetts, which has raised some $12 million so far, according to the latest state campaign finance reports. As the reports show, that money has been used to soak the state with television ads that make what opponents say are inaccurate claims, like that lifting the cap would bring more money to public schools and asserting that the measure would only impact “low-performing” districts, not suburban schools.

The committee’s main funder is a New York-based non-profit called Families for Excellent Schools Advocacy (FES), which has contributed more than $8 million, including some $3 million over the past month, according to the latest state campaign-finance filings.

Maurice Cunningham, a political science professor at the University of Massachusetts Boston, has been tracking the dark money behind the ballot measure campaign and overall education reform infrastructure in the state. He uncovered that six major contributors to Great Schools Massachusetts in 2015 also made large contributions to Strategic Grant Partners, a “venture philanthropy fund” that helped launch Families for Excellent Schools' Massachusetts operation.

Gov. Baker is a leading supporter of the ballot measure and members of his administration are closely aligned with the campaign. After elected governor in 2015, he made Jim Peyser, who was then a trustee on the FES’s board, his secretary of education. Paul Sagan, his appointee to chair of the state’s board of elementary and secondary education recently made a $100,000 contribution to the pro-charter ballot measure campaign.

“This has to be a person-to-person campaign”

The seemingly orchestrated influx of millions of dollars has the teachers unions and their allies on their heels. The latest poll, released Wednesday, found that 47 percent of likely voters plan to vote against the measure while 36 percent favor it. Reaching the 18 percent who said they were undecided will be a crucial task for the teachers unions.

While the teachers unions have launched an aggressive TV ad campaign of their own, they, along with a coalition of progressive groups, are also pushing back on the ground, organizing their members to knock on doors and make phone calls to potential voters to talk about the impact the ballot measure would have on their local public schools.

“There’s no way we’re going to meet them in terms of money they spend. This has to be a person-to-person campaign,” Madeloni says. “When we win by doing that, we’re going to have built something more than what their promised $18 million ad campaign could do.”