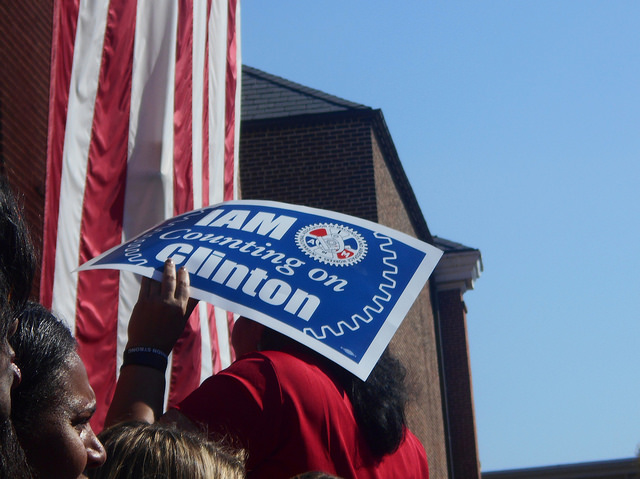 According to a statement put out by IAM the day of the vote, the endorsement was based on an internal poll of nearly 2,000 of the union’s members. (Karen Murphy/ Flickr)

Back in August 2015, when Bernie Sanders and Hillary Clinton were still battling it out for the Democratic nomination and Sanders’ campaign was viewed as a quixotic amusement, Clinton won the pivotal endorsement of the International Association of Machinists and Aerospace Workers (IAM), one of the nation’s biggest unions. It was the second endorsement Clinton had secured from a national union and helped shore up Clinton’s credentials as a friend to workers.

Emails released by WikiLeaks over the past two weeks suggest the kind of machinations that went on behind the scenes to secure Clinton that endorsement. According to a July 8, 2015 email from Nikki Budzinski, the Clinton campaign’s labor outreach director, the union’s then-international president, Tom Buffenbarger, moved up the endorsement vote many months and did so without the knowledge of most of IAM’s officers.

“I just spoke with IAM, they have confidentiality [sic] shared with us that Buffenbarger will be moving his board to take a endorsement vote on August 14th in NYC,” wrote Budzinski. “Only three officers at IAM are aware of this, so its [sic] being tightly held so that they don't have any issues on the board with timing.”

According to a statement put out by IAM the day of the vote, the endorsement was based on an internal poll of nearly 2,000 of the union’s members, including current and retired workers. The survey, which IAM spokesman Frank Larkin at the time told In These Times had “reached out quite scientifically” to IAM members, favored Clinton by a more than 2-1 margin, including more than 6-1 against Sanders among Democratic members, according to IAM’s press release. The poll also had IAM members favoring early involvement by more than 2-1.

Budzinski’s email raises questions, however, about whether the early endorsement was indeed driven by the feelings of members, or if it was more based on the whims of Buffenbarger. IAM did not immediately respond to a request for comment.

“The IAM endorsement is usually made at their Convention,” wrote Budzinski. “But their next Convention is not until 2016. Buffenbarger didn't want to wait.”

Five months after the vote, Buffenbarger retired and joined the Clinton campaign as an unpaid surrogate and liaison to labor groups.

The IAM officers involved were so certain Clinton would win the endorsement vote, they requested that she attend a retirement dinner for IAM Secretary-Treasurer Robert Roach that was to be held the evening of August 14, following the vote. Budzinski noted that the board would attend the dinner.

In a separate email, Budzinski openly referred to the dinner as an “endorsement event.” As she explained in another email, the dinner would be the venue where Clinton would officially accept the IAM endorsement from the board. Buffenbarger was so insistant Clinton be at the event in person, Budzinski wrote, that “he is even offering a jet to get her there (!).”

Calling the vote early was crucial for the Clinton campaign. At the time, Sanders—considered a longshot candidate for most of the year—had dramatically filed down Clinton’s once-commanding lead in the polls, and both candidates held an endorsement from one national union each: Clinton from the American Federation of Teachers (AFT) and Sanders from National Nurses United (NNU). Clinton was also under fire from left-wing and labor groups for her less than forthright positions on issues like the $15 minimum wage and the Trans-Pacific Partnership agreement.

It’s not clear how exactly IAM’s internal poll was conducted. But there’s a chance that, given more time and as IAM members and other voters got to know the candidates better, Clinton’s significantly stronger showing in the survey could have been eroded or even reversed by Sanders.

By the close of February 2016, Sanders—once considered barely more than a protest candidate by most media observers—had demolished Clinton in New Hampshire and virtually tied with her in Iowa. And as The Intercept reported in January 2016, Sanders tended to win endorsements from unions and progressive groups that let its members vote.

Buffenbarger justified the IAM’s early endorsement on the idea that the situation was dire for Clinton. “She is now the target of unprecedented attacks, financed on a scale never seen before,” Buffenbarger said at the time. “The time to help is when help is needed most, and we intend to do just that.”

It’s not clear why August 2016 was the time help was “needed most,” however. At that point, the Democrats were yet to even have their first debate, and while the GOP candidates took regular potshots at Clinton, the Republican field was a crowded mess. Meanwhile, Buffenbarger’s alarm about financing was more applicable to Clinton than her opposition. By July 2015, Clinton had beaten Obama’s 2012 fundraising record and raised more than $45 million, much of it from lobbyists and Wall Street-linked volunteers.

The WikiLeaks emails give us only a small glimpse into the behind-the-scenes wheeling and dealing that goes into presidential endorsements. What they do suggest, however, is that in the midst of a competitive primary campaign, at least one of Clinton’s high-ranking allies in the world of labor was more than happy to do what he could to tip the scales in her favor.