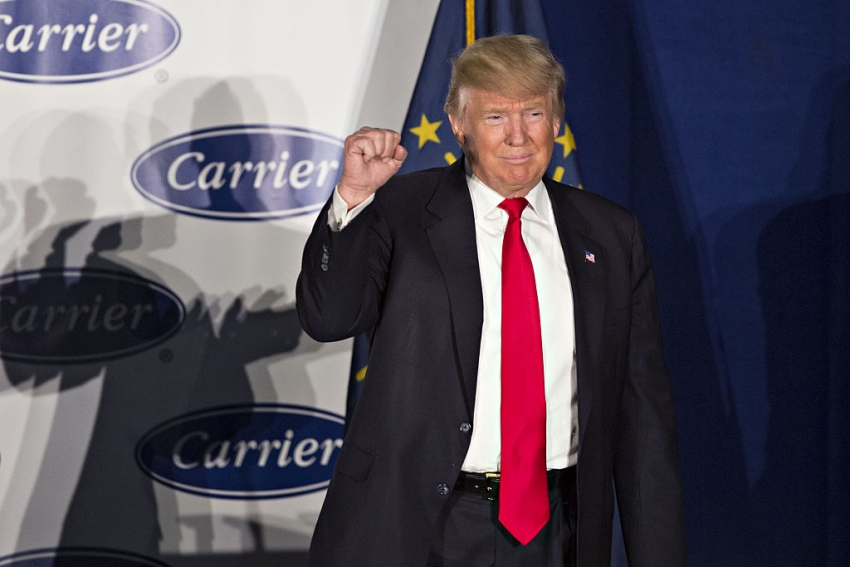 Indianapolis, Indiana—As one of their first orders of business, President-elect Donald Trump and Mike Pence, his vice president, helped strike a deal between the Indiana Economic Development Corporation (IEDC) and the Carrier Corporation to keep more than 1,000 jobs at Carrier’s Indianapolis manufacturing plant.

The company had originally planned to send all but 300 research and headquarters jobs at the facility to Monterrey, Mexico, where workers reportedly earn $3 an hour. Carrier later decided to keep an additional 800 or so jobs in Indiana in exchange for a reported $7 million in tax breaks over 10 years.

Carrier was a frequent target of Trump during his presidential campaign, in which he promised to protect jobs and penalize companies for leaving the United States. After tweeting about a deal in the works with Carrier on Thanksgiving, Trump and Pence spent the next several days hashing out its parameters before the president-elect announced on Twitter on November 29 that they had reached an agreement. Trump took a victory lap at Carrier’s plant in Indianapolis this week.

Though controversial, it’s important to note that workers at Carrier have lauded the Trump-Pence deal. That’s the case even though the actual terms and conditions of the deal, as it applies to workers who get to keep their jobs, have yet to appear in fine print and the union representing the plant was not involved in the negotiations.

Looked at as a whole, the Trump-Pence announcement has received mix reviews. Some have celebrated Trump’s “art of the deal,” others have questioned whether this is a model that can be replicated as a way to keep jobs in the United States, while Bernie Sanders decried it as a bad deal for taxpayers and a potentially disastrous precedent moving forward.

Even Trump admitted his own sense of surprise at a press conference celebrating the agreement.

During the presidential campaign, in which he made an example of the Carrier plant as the dark side of the North American Free Trade Agreement (NAFTA), Trump told the public that he would use his business prowess to force Carrier and companies like it to keep jobs in the United States. If not, Trump said, there would be economic hell to pay.

But in his speech in Indianapolis, he said his campaign promise to bring Carrier jobs back was a “euphemism,” not an actual promise to cut a deal at that particular plant. With Pence uniquely situated to help foster a deal through the IEDC, though, the stars aligned and the deal was cut. (Pence chairs the IEDC board.)

Workers at a nearby plant in Huntington, Indiana, however, may not be as lucky.

That facility, which is also owned by Carrier’s parent company, will soon lay off 700 workers. Many of them made the two-hour drive south to Indianapolis to protest. They held signs that read, “What about our jobs?”

“All of our jobs are leaving. Why isn’t he saving some of our jobs if not all of them?” asked Bill Davis, president of the International Brotherhood of Electrical Workers Local 983. “I’d love to keep the whole facility, but even if we can keep some of our jobs – because I think some of the people would be glad to retire and some of the younger ones stay – so I think our membership could be satisfied even if it was just 50 percent that got to stay.”

Missing in the many media stories that have tackled the Carrier deal is the fact that Carrier’s parent company—United Technologies—isn’t just in the business of offshoring U.S. jobs.  It also likely skirts paying its share of federal and state income taxes by maintaining offshore tax havens. Carrier, itself, is incorporated in the domestic tax haven of Delaware.

Though a company with taxable income at the level of United Technologies has a corporate tax rate of 35 percent at the federal level, United Technologies only paid an 11 percent tax rate between 2008-2012, according to numbers crunched by Citizens for Tax Justice. It has done so while also securing billions of dollars of U.S. government contracts and receiving hundreds of millions of dollars in state and federal tax subsidies.

Matthew Gardner, a senior fellow at the Institute on Taxation and Economic Policy, who has critiqued the Trump-Pence Carrier deal in a series of blog posts, told In These Times he sees this entire saga as an example of Carrier “gaming the system” for its own ends on the backs of taxpayers.

“Companies competing with United Technologies that haven’t as brazenly threatened to move jobs offshore will have to pay higher tax rates than United Technologies,” says Gardner. “And, of course, in the balanced-budget setting of state budgets, every tax break for a specific company ultimately has to be paid for by the rest of us, including smaller businesses and working families. This deal is a poke in the eye for the many business and individuals who already pay their fair share.”

Like Sanders, Gardner sees Carrier as a worrisome case moving forward in the sense that if it can be repeated or modeled at other workplaces in other cities and states, it will only harm working-class communities.

“The more such deals are carved out, the more unfair—and unsustainable—the tax system becomes,” says Gardner. “From a broader economic development perspective, and from the perspective of the public interest, there’s nothing to cheer about here and certainly nothing to replicate.”

Steve Horn is a Madison, WI-based Research Fellow for DeSmogBlog and a freelance investigative journalist.