At the Interstate Oil and Gas Compact Commission (IOGCC)​‘s 2016 meeting in Denver, Colorado this week, a representative from a prominent oil and gas lobbying group advocated that auctions of leases on federal lands should happen online ​“eBay”-style — a clear attempt to shut the public out of the bidding process for fossil fuel leases on public lands.

Speaking on public lands issues in front of IOGCC’s public lands committee, Kathleen Sgamma — Western Energy Alliance’s (WEA) vice president of governmental affairs — compared environmental groups’ Keep It In The Ground campaign actions at U.S. Bureau of Land Management (BLM) auctions to a ​“circus.” Sgamma said WEA was in contact with both BLM and Congressional members to push the auctions out of the public sphere and onto the internet. (DeSmog, which attended the IOGCC meeting, recorded the presentation and has published it online.)

Sgamma opened her statement on the Keep It In The Ground ​“circus” by pointing to the fact that BLM, in testimony delivered to Congress on March 23, has compared the group’s activism to that of the right-wing militia that occupied the Malheur National Wildlife Refuge in Oregon. She also revealed that WEA has a counter campaign that it will launch soon to oppose Keep It In The Ground.

Here is a partial transcript of Sgamma’s statement:

“So Western Energy Alliance is planning some counter-efforts with Keep It In The Ground, which we’ll be announcing probably later this month. We’ve also been working with BLM and Congress to say ​‘Let’s just get rid of this circus, let’s just have online auctions. eBay is out there, it can be done.’ So BLM has also expressed concern for its employees as well. In fact, BLM Director [Neil] Kornze, in a hearing a couple months ago, was asked about all of these protests and even equated these protests with the militia who shut down and occupied the Malheur Wildlife Reserve in Oregon. So BLM is likewise concerned about the safety of its employees and it put in place security measures at last week’s auction. But, what we’re saying and what a lot of people are saying is, ​‘Let’s just get rid of the circus. Let’s do online auctions.’ So hopefully BLM is compelled even more after Thursday to move in that direction.”

The ​“Thursday” Sgamma referred to was a protest that took place at a BLM auction on May 12, near Denver, occurring under the auspices of Break Free—a worldwide wave of anti-fossil fuel actions held between May 3 and 15. It was after that meeting that Sgamma deemed the Keep It In The Ground campaign a ​“circus,” referring to it as such in a quote given to The Denver Post, and calling for its ​“end” by implementing online auctions.

WEA’s includes over 400 oil and gas industry members and many of the same companies that funded the IOGCC meeting: XTO Energy (an ExxonMobil subsidiary), ConocoPhillips, Devon Energy, Noble Energy, Marathon Oil, Anadarko and others. It was at a WEA meeting in 2014 that Rick Berman stated in a speech that the oil and gas industry was waging an ​“endless war” against environmental advocates, and that it has to ​“play dirty to win.”

Keep It In The Ground is a campaign based on the principle that, due to the climate-change costs inherent in not doing so, fossil fuels on public lands must be left in the ground. IOGCC, which claims concern about ​“protecting health, safety and the environment” in its mission statement, is on the record to say it has no stance on climate change.

It appears the WEA push for online lease sales began in February, when it wrote and published a letter to BLM making its pitch:

“Might we suggest as an alternative that BLM take advantage of online auctions,” wrote Sgamma in the February 11 letter. ​“If protesters continue to disrupt lease sales, we strongly suggest BLM simply hold online auctions within the same quarter as the original sales. Online auctions also have added cost-savings benefits as venues and security personnel do not have to be enlisted to handle potentially unruly crowds.”

“There’s been research done that shows the overall participation and bid amounts are enhanced through the internet process,” Kent Hoffman, deputy state director of BLM’s Utah office, told Desert News on May 6. ​“We’ve been desiring to move into the electronic world for years… It is more efficient for us and probably for industry, too, to participate in an online auction.”

BLM’s Washington, D.C., leadership will have the final say over whether online auctions are the future of bidding for oil, gas and coal leases on U.S. public lands.

Meanwhile, Congress has started moving on the WEA-proposed online auctions of public lands. U.S. Sen. Orrin Hatch (R‑Utah). Hatch inserted an amendment into the proposed energy bill calling for the BLM to study the possibility of online bids ​“so that the mere threat of protest does not derail oil and gas lease auctions that are critical to Utah’s economy.”

The amendment, Section 3108 of the legislation, was passed in the Senate as part of the broader Energy Policy Modernization Act on April 20 and awaits a House vote. 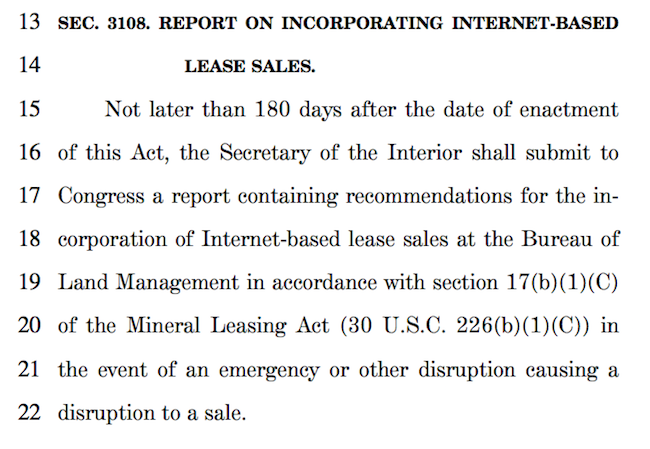 A quote from Sgamma is featured in a Hatch office press release about the provision’s insertion into the bill:

“Western Energy Alliance sincerely appreciates Senator Hatch’s amendment that helps to address the uncertainty in oil and natural gas leases sales. Keep-It-in-the-Ground protesters are disrupting lease sales as a way to prevent development of Utah’s energy resources, which deprives Utahns of jobs, economic opportunity and tax revenue. The amendment is a common sense way to ensure that a vocal minority cannot block responsible business in Utah and across the West. In addition, it helps BLM fulfill its obligations to conduct quarterly oil and gas sales using well-established technology, saving time and money.”

During Hatch’s 2012 reelection campaign, WEA, Devon Energy and other players in the hydraulic fracturing (“fracking”) industry hosted a fundraiser luncheon for Hatch with a minimum $1,000 contribution to attend. Throughout his political career, Hatch has taken $703,179 in campaign contributions from the oil and gas industry.

Sgamma will, ironically enough, testify in front of the House Subcommittee on Energy and Mineral Resources on May 19 at a hearing titled ​“Examining Deficiencies in Transparency at the Department of the Interior.” A memorandum on the hearing reads:

“While the Obama Administration and the Department of the Interior have issued plans and executive orders claiming to improve transparency of the federal regulatory process, there are increasing examples of significant rules being issued that are based on science or data that is not made available to the very people or entities that they would regulate. If the ability to comment or otherwise participate in the rulemaking process is restricted, the fundamental fairness of the process is called into question.”

Whether Sgamma will testify about Section 3108 at the hearing remains to be seen.

Annie Leonard, Greenpeace USA executive director, expressed concerns about the potential online auctions for fossil fuels leases on federal lands. (Greenpeace is part of the Keep It In The Ground coalition and helped organize the ​“Break Free” events.)

“A key feature of public lands is that they’re public,” says Leonard. ​“Neither the government nor the fossil fuel industry should be able to decide what happens to those lands without a fully participatory process. Any attempt to distance the public from decisions about our own land is an abuse of democracy.”

(This article is reposted with permission from desmog​blog​.com.)

Check out the options
Steve Horn is a Madison, WI-based Research Fellow for DeSmogBlog and a freelance investigative journalist.
Have thoughts or reactions to this or any other piece that you'd like to share? Send us a note with the Letter to the Editor form.
More articles by Steve Horn
Labor
Carrier is “Gaming the System” and Trump Just Played into Its Hands
Feature
Obama’s Man in Frackademia
The president's pick to head the Department of Energy has deep ties to the oil-and-gas industry.
Similar articles
Rural America
The Curious Case of Carter County: How a Small Town in Montana Stopped Shrinking
On the Great Plains, these days, rural towns tend to wither. But in remote eastern Montana, one community is bucking that trend. How?
Eric Dietrich
Rural America
Study: “Salmon Remain on the Brink of Extinction. And Time Is Running Out.”
Between dams and warming waters, West Coast populations of wild salmon have plunged by 98%. What will it take to stop the decline?
Tara Lohan
Rural America
The EPA Responded to a Respiratory Virus by Relaxing Pollution Controls
Major polluters were deemed 'essential.' Under EPA policy, environmental and safety inspectors were not.
Victor B. Flatt and Joel A. Mintz
Join our newsletter
Fearless journalism, emailed straight to you.
Subscribe and Save 66%