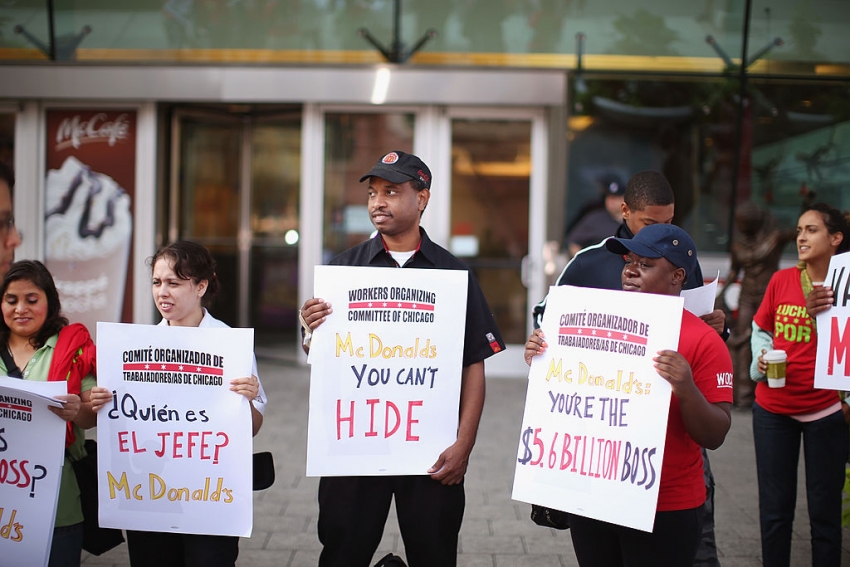 “At a time when workers’ wages are stagnant and protections are being eroded, it’s important to remind people that many protections they probably take for granted, like the 40-hour work week, only became reality thanks to unions’ hard-fought battles,” said Rep. Carol Shea-Porter. “Now more than ever, we need a strong NLRB to defend these victories.” (Photo by Scott Olson/Getty Images)

House Republicans have long sought to undermine the National Labor Relations Board (NLRB), claiming it destroys jobs, chills employer free speech and makes life harder for businesses, generally. The House Committee on Education and the Workforce continued that attack last month, holding a subcommittee hearing, entitled “Restoring Balance and Fairness to the National Relations Board.”

Chaired by Rep. Tim Walberg, a Republican from Michigan, the hearing focused on the NLRB’s recent joint employer standard, its recognition of so-called micro-unions and the board’s new election rules, which Walberg called an “ambush election” rule.

“We have repeatedly seen the Obama NLRB overturn long-standing labor policies and put in place new policies designed to empower special interests,” Walberg said in his opening statement. “In the weeks and months ahead, we will do everything we can to turn back this failed, activist agenda and restore balance and fairness to the board.”

The assault on the NRLB falls in line with broader Republican and right-wing efforts to disempower the NLRB, such as those outlined in The Heritage Foundation’s “A Blueprint for Balance: A Federal Budget for 2017” and the House Freedom Caucus’ “First 100 Days: Rules, Regulations, and Executive Orders to Examine, Revoke, and Issue.” Their recommendations include undoing the joint employer standard, which puts both staffing agencies and employers at the same bargaining table with employees, and moving to defund the NLRB based on declining union membership.

According to subcommittee ranking member Rep. Gregorio Sablan, from the Northern Mariana Islands, “there have been 25 hearings and [bill] markups focused exclusively on weakening the National Labor Relations Act” during the past three sessions of Congress.

“When you consider that private sector unions represent a mere 6.4 percent of the workforce, it is troubling that the Committee has directed so much time on this small independent agency. But attacks on the NLRB are what they are—a proxy for attacks on unions,” said Sablan.

NLRB essential to non-union workers, too

So what’s the reality?

“It’s not a very big agency, but historically a very important one,” The Century Foundation fellow Moshe Marvit says about the NLRB, which was established in 1935 with President Franklin D. Roosevelt’s signing of the National Labor Relations Act (NRLA). That importance has not diminished since the NLRB’s early days, explains Susan Davis, attorney with Cohen, Weiss and Simon, who testified at the hearing.

“With income inequality at an all-time high and so much of this nation feeling financial pressure and insecurity, now more than ever, employees’ rights to collective bargaining must be protected. In enacting the National Labor Relations Act, Congress recognized that strong unions were a critical component of re-building a middle class in this country, and history has borne that out,” Davis said at the hearing.

The median weekly earnings for union members last year was $1,004, compared to $802 for non-union workers, according to the Bureau of Labor Statistics—a potential annual difference of $10,504. Union members also tend to have better benefits, including health insurance, pensions, paid sick leave, holidays and vacation. But the NLRB is also vital to the more than 90 percent of U.S. private sector workers without union representation, says National Employment Law Project general counsel and program director Catherine Ruckelshaus.

“The reason the NLRB is so important today is because of its required scope to protect workers who are interested in engaging in concerted activity—to come together, ask questions, advocate for better working conditions, seek protective equipment or join a union,” said Ruckelshaus. “It actually ends up protecting a lot of workers who are not in a union.”

As the NLRB explains, its mission, as set out by the NLRA, is to protect the rights of private sector employees “to join together, with or without a union, to improve their wages and working conditions.”

“Nothing in the Act says you have to be in a union to exercise those rights,” said Celine McNicholas, Economic Policy Institute (EPI) labor counsel. “The argument that you hear a lot from Congressional Republicans, and we heard it at the hearing, is that fewer and fewer people are members of unions and that makes the board irrelevant. But increasingly there’s a lot of action around increasing the minimum wage—people coming together with their coworkers—that activity is covered by the [National Labor Relations] Act.”

At the hearing, Republicans and three of the four witnesses (National Right to Work Legal Defense Foundation vice president and legal director Raymond LaJeunesse, Jr., attorney Kurt Larkin and Reem Aloul, owner of a homecare franchise who spoke on behalf of the Coalition to Save Local Businesses) stressed how they consider recent NLRB rulings burdensome to employers.

Aloul called the joint employer standard “one of the regulatory outrages of the last several years,” saying it prevents franchisees like herself from working with their parent companies and growing their businesses. However, EPI’s McNicholas explains that what the joint employer standard is really about is “who should be at the bargaining table” when it comes to labor negotiations and “who’s on the hook when that goes afoul of the NLRA.”

The joint employer standard, explains Marvit, “is more and more important every day when so many workers aren’t employed directly by the employer they work for. They might show up at an office or a warehouse but that’s not their employer. Their employer is a staffing agency.” The number of people working through staffing or temp agencies is at an all-time high.

“It’s imperative that staffing agencies and host employers collaborate to ensure the safety of workers,” says George Washington University environmental and occupational health professor David Michaels, who served as assistant secretary of labor for occupational safety and health during the Obama administration.

Larkin and LaJeunesse also took aim at the NLRB’s new election rules designed to remove unnecessary delays and what the board calls “barriers” to union elections. Representative Phil Roe, a Republican from Tennessee, called the rules “a solution looking for a problem.” LaJeunesse said they put an “average worker” at a disadvantage against “a professional union organizer.”

Larkin and LaJeunesse also argued against the NLRB’s recognition of micro-unions, which allows subsets of employees at large workplaces like department stores or universities to unionize, saying it makes it harder for employees to oppose unionization and union dues. This, said Larkin, has the potential to paralyze employers in endless negotiations.

“The board has done a lousy job of protecting the rights of private sector employers,” said LaJeunesse. “The solution,” he said, “is a national right-to-work law.

But, said committee member Rep. Carol Shea-Porter, a Democrat from New Hampshire, after the hearing, “This week American workers who know how important it is to defend the NLRB are seeing a ray of hope from my home state, New Hampshire, where our legislature just killed a right-to-work proposal with a bipartisan vote. What worked in New Hampshire can work on the federal level, too.”

“At a time when workers’ wages are stagnant and protections are being eroded, it’s important to remind people that many protections they probably take for granted, like the 40-hour work week, only became reality thanks to unions’ hard-fought battles,” said Shea-Porter. “Now more than ever, we need a strong NLRB to defend these victories.”