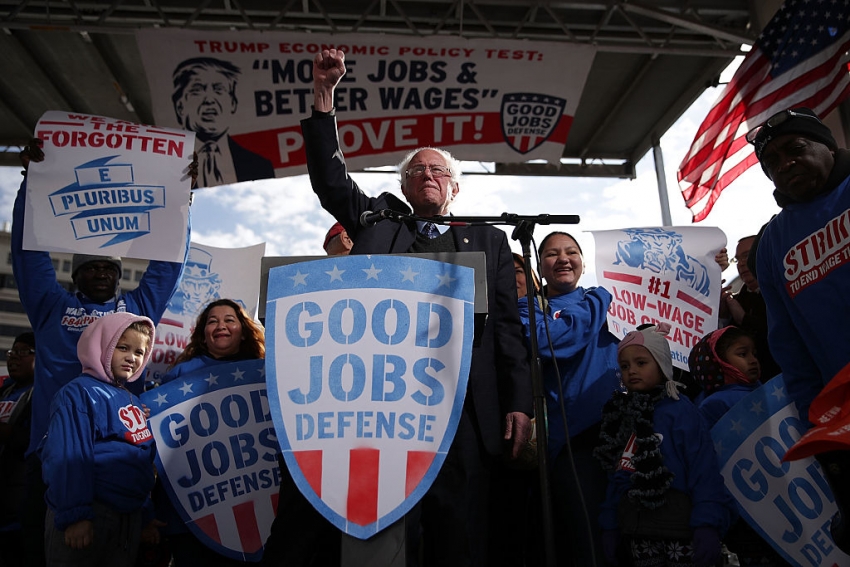 “Simply put, when employees have an ownership stake in their company, they will not ship their own jobs to China to increase their profits, they will be more productive, and they will earn a better living," Sanders said. (Photo by Alex Wong/Getty Images)

The last few days have been a bit of a whirlwind, politically speaking. Most of it has to do with the onslaught of chaos that followed Donald Trump’s abrupt firing of FBI Director James Comey—a move political scientists agree is off the spectrum of normalcy in the history of the American presidency. Before his termination, Comey was leading an investigation into the Trump team’s alleged ties to the Russian government. Keith Ellison, deputy chairman of the Democratic National Committee, has said “we are witnessing a constitutional crisis.” Calls for impeachment are in the air, along with a good deal of conspiracy theorizing.

In sum, the republic as we know it may be its closest yet to tatters. Enter: Bernie Sanders, the senator from Vermont and the country’s most popular politician. He—alongside Democratic Sens. Patrick Leahy, from Vermont, Kirsten Gillibrand, from New York, and Maggie Hassan, from New Hampshire—is encouraging workers to take control of the means of production.

This isn’t some right-wing conspiracy theory, but the intended result of two bills introduced to relatively little fanfare Thursday. The first, the WORK (“Worker Ownership, Readiness and Knowledge”) Act, would direct more than $45 million in funding to state-level employee ownership centers, aimed at providing training and technical assistance to current and prospective worker-owners. A second piece of legislation would establish something called the U.S. Employee Ownership Bank, via $500 million in funds for low-interest rate loans and financial assistance for workers who want to buy out the businesses where they work and either incorporate them as worker-owned cooperatives or establish employee stock ownership plans (ESOPs), which give workers an ownership stake in their company.

“By expanding employee ownership and participation, we can create stronger companies in Vermont and throughout this country, prevent job losses and improve working conditions for struggling employees,” Sanders said in a statement. “Simply put, when employees have an ownership stake in their company, they will not ship their own jobs to China to increase their profits, they will be more productive, and they will earn a better living.”

Notably, a provision outlined in the second bill would give employees the first crack at taking over their workplace if owners move to offshore their jobs, according to John Duda.

“I think it would be a game changer both in terms of accelerating worker-ownership, and discouraging companies from pursuing a race to the bottom in terms of looking for cheaper wages overseas,” Duda said about the legislation.

Cooperative ownership has a long history in the United States, Duda explains. The earliest champions of organized labor in America pushed for cooperatives as a means to shore up employee control over the workplace. As a document officially adopted by the Knights of Labor in 1878 put it, “The recent alarming development and aggression of aggregated wealth ... render it imperative ... that a check should be placed upon its power and upon unjust accumulation, and a system adopted which will secure to the laborer the fruits of his toil.” Later, New Deal initiatives like the Rural Electrification Administration provided start-up funds for people in rural areas to create cooperatives, with rural electric cooperatives now meeting 11 percent of the country’s demand for electricity. Civil rights leaders from Ella Baker to Fannie Lou Hamer would also cut their teeth in cooperative self-help programs.

Today, companies from Cabot Creamery to REI are cooperatives of one form or another. And Publix Super Markets and Wawa convenience stores are just two of many major firms in the United States that offer their employees ESOPs. Worker-owned cooperatives, by contrast—governed by the principle of “one worker, one vote”—tend to be smaller in the United States than either ESOPs or producer and consumer cooperatives, but more widespread throughout South America and Europe. In contrast to the estimated 10.3 million Americans covered by ESOPs, just over 5,000 people are a part of worker-owned cooperatives.

Sanders himself is no stranger to cooperatives. He’s introduced similar bills before, and the legislation is partially inspired by the Vermont Employee Ownership Center, or VEOC, of which Sanders has been a longtime booster. Speaking to a forum on workers’ ownership at Burlington City Hall in 1985, then-Mayor Sanders said, “Democracy cannot just mean the opportunity to vote for a Walter Mondale or a Ronald Reagan once every four years ... If we have a vision as to what democracy is about, it’s got to mean the right of a working person to control his or her job, to have some say about what’s being produced, to sit down with the other workers and say, ‘This is what I think we should do.’” (You can watch the full clip here.)

One of the other models for the kind of support programs outlined in the WORK Act emerged out of the closure of the Youngstown Sheet and Tube factory in 1977—a siren song for the kind of deindustrialization that would plague the Rust Belt for years to come. Workers, Duda said, attempted to seize the plant and run it cooperatively in the run-up to the closure. The effort ultimately failed, but captured the attention of Ohioans interested in developing cooperative businesses. Started in 1987, the Ohio Employee Ownership Center (OEOC) has since helped some 90 companies to become employee-owned, creating an estimated 15,000 employee-owners in the Buckeye State. A like-minded push in New York City has seen some initial success after an investment of $1.2 million in worker cooperative business development efforts in 2014.

He wasn’t overly optimistic about the bills’ chances in Congress, but thought their introduction represented a step forward in terms of bringing cooperatives further into America’s economic mainstream.

“We have a lot of drama going on, and it’s vitally important to pay attention to,” Duda told In These Times, “but we need to not forget that we are seeing historic levels of inequality. We need to be thinking about solutions and a transition to a broader-based ownership of the economy that allows us to tackle that question. We may not be able to pass this legislation today, but there’s going to be a time at which policymaking is possible again and we need to be ready.”