How Union-Busting Bosses Propel the Right Wing to Power 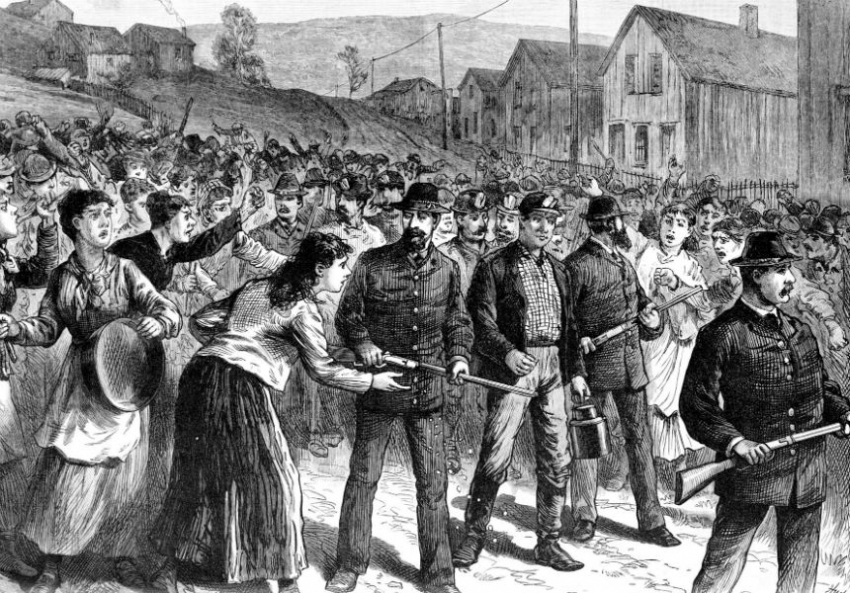 U.S. bosses fight unions with a ferocity that is unmatched in the so-called free world. In the early days of the republic, master craftsmen prosecuted fledgling unions as criminal conspiracies that aimed to block their consolidation of wealth and property. During modern times, corporations threaten the jobs of pro-union workers in over half of all union elections—and follow through on the threat one-third of the time. In between, bosses have resorted to spies and frame-ups, physical violence, court injunctions, private armies of strikebreakers, racist appeals and immigrant exploitation.

The labor question has never been a genteel debate about power and fairness in America.

A new book from the University of Illinois Press’ “The Working Class History in American History” series offers a broad survey of how bosses have historically engaged in union-busting. Against Labor: How U.S. Employers Organized to Defeat Union Activism is a collection of scholarly essays edited by Rosemary Feurer and Chad Pearson.

The essays that comprise Against Labor cover a period that stretches from the late 1880s to the Clinton era. Elizabeth Esch and David Roediger explore the racist assumptions that were built into so-called “scientific management.” The men with the stopwatches who broke production down into ever smaller tasks had ethnic preferences for each: Lithuanians for grinding steel, “American Poles” for forging, never Mexicans for the night shift and so on. A happy (for management) side effect of this speed up was the simmering resentment between different nationalities that hindered workplace solidarity.

Chad Pearson shines a light on Progressive-era worker organizations that were created and propped up by employers to help workers resist “union monopolies.” In other words, they created unions for scabs to break strikes and open up closed union shops.

Robert H. Woodrum looks at the use of the Ku Klux Klan and employer-sponsored vigilantism to run union organizers out of the Alabama docks and reverse the modest gains southern workers made during World War I. Michael Dennis updates the southern picture by documenting the UFCW’s sustained, large-scale organizing drive in non-union Virginia supermarkets in the early 1990s. Already facing enormous competitive pressure from Walmart, the supermarkets dug in for a years-long fight with little concern for the law. The story is a perfectly concise example of just how broken the National Labor Relations Board (NLRB) was as a venue for protecting workers by the time Bill Clinton took office.

None of these stories are particularly earth-shattering revelations to people who study unions and union-busting. What’s most notable is how employer tactics get recycled and adapted from era to era, and that no era was free from union-busting. That’s a key point of Against Labor. Editors Feurer and Pearson place their collection squarely within the new body of scholarship on the “rise of the right.”

Contrary to a popular narrative that has an activist right wing resurging in the years between Nixon’s 1968 election and Reagan’s firing of the air traffic controllers in 1981, the modern right wing began rising in reaction to the New Deal. Many employers simply never accepted the legitimacy of state intervention on behalf of union rights that was enshrined in the original National Labor Relations Act. These employers—mostly small and mid-sized firms—acted as an advance guard against union rights.

They pressed against the edges of the law, testing their ability to fire union activists for cause, replace strikers, lockout recalcitrant unions and restrict organizers’ access to the job site. They learned to love making the NLRB go to court to enforce orders against bosses’ union busting, for in the courts they found far more sympathetic arbiters of management’s rights. The biggest holes in labor law’s protections of workers rights, exploited in the anti-union drives of the 1980s, mostly come from bad court decisions in the postwar years that some people like to kid themselves were a golden age of labor-management cooperation.

Sure, there were employers who talked a good game about their (junior) “partners” in labor, kept their pensions and healthcare plans funded and mostly avoided knock-down, drag-out contract fights. But, clearly in retrospect, they were ready to beat down and bust their own unions just as soon as the advance guard of reactionaries created a political environment where it was possible.

The most fascinating story in the collection, “The Strange Career of A.A. Ahner: Reconsidering Blackjacks and Briefcases,” comes from Feurer. It tells of a hired gun whose career bridged two very different eras of labor-management relations in the Kansas City area. Scholars have referred to the advent of the NLRB as a kind of transition from blackjacks to briefcases for anti-union employers. It’s commonly assumed that the Pinkertons, thugs and company “unions,” employers’ first line of defense against unions in the 1920s, were muscled out of the way by a new generation of lawyers who promised to “work the system” to represent their clients’ interests at the NLRB. But in Ahner we find a direct, lineal connection between the two approaches.

Ahner ran his own detective agency beginning during World War I. For the right price, he would spy on workers, plant bombs and frame union activists (he had lots of friends in law enforcement at a time when there weren’t terribly rigid boundaries between local business and police). This work continued into the 1930s, when he was investigated by a Senate committee probing how employers were violating the new labor act.

Recognizing that times had changed, Ahner improved his image, if not his underlying philosophy. Working with a local priest, he became co-chair of the St. Louis Labor-Management Committee, which counseled conciliation and arbitration. Through this “volunteer” work, he lined up consulting gigs with unionized employers. Mostly this was for bargaining and grievances, where union representatives who knew his history would be aghast to find him sitting across the table with an air of respectability. But occasionally—even in the 1950’s—he was called on for union avoidance work, where he pressed the limits of employers’ rights to their own free speech and to squelch their workers’.

Ahner’s story enriches our understanding of the real roots of today’s anti-unionism. One wishes Rosemary Feurer had expanded her research on Ahner and others like him and made that the subject of her book.

It also serves as a warning that today’s union-buster will claim to have “always” had a “productive working relationship” with unions when we begin to win again. But the only “always” that applies to American capitalists is that they are always against labor.