Republicans Will Turn the NLRB into a Force for Union Busting. We Can Turn It Back. 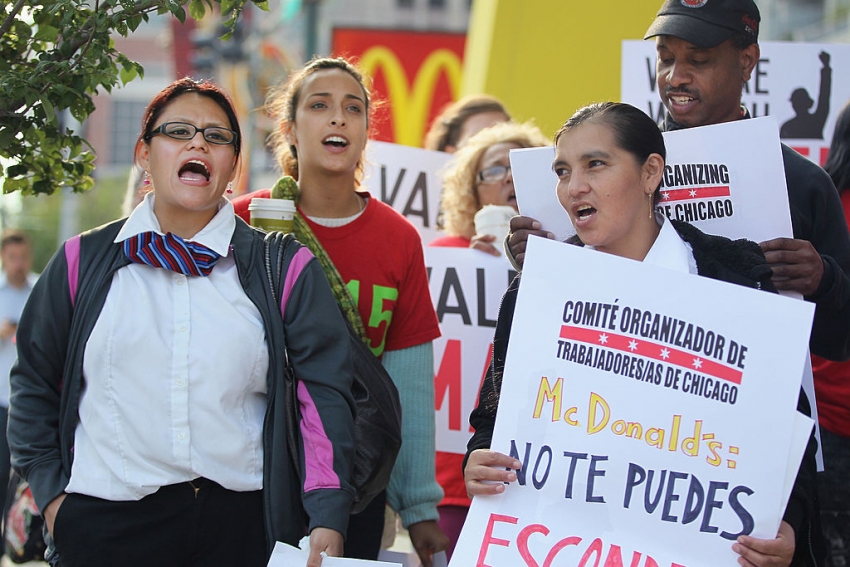 On the potential chopping block are the board’s expedited election rules, the organizing rights of graduate employees and workers at charter schools, the rights of subcontracted employees to join their coworkers in a union, the ability of unions to organize smaller units within a larger enterprise and the culpability of a parent company for a subsidiary’s illegal behavior. (Photo by Scott Olson/Getty Images)

According to a recent Bloomberg report, Donald Trump has submitted the names of two anti-union lawyers to the FBI for vetting. This is a precursor to nominating them to the National Labor Relations Board (NLRB) by June to cement a Republican majority that will reverse many of the pro-worker decisions and policies that the federal agency has advanced in recent years.

Marvin Kaplan works for the Occupational Safety and Health Review Commission. William Emanuel is a lawyer at the union-busting firm, Littler Mendelson. Either of these garden-variety union-haters could have been appointed by Jeb Bush, John Kasich or whatever bland man in a navy suit the Republicans might have nominated if the reality TV star hadn’t bumbled his way into the GOP nomination and presidency.

On the potential chopping block are the board’s expedited election rules, the organizing rights of graduate employees and workers at charter schools, the rights of subcontracted employees to join their coworkers in a union, the ability of unions to organize smaller units within a larger enterprise and the culpability of a parent company for a subsidiary’s illegal behavior.

As inevitable as this right turn is for our nation’s workers’ rights board, so, too, should be our planned counterattack.

Last summer, I wrote about the NLRB’s turn towards pro-worker activism. I noted that most unions were slow to notice the change and slower still to press an agenda of legal activism at the board. The next few years will demonstrate why unions tend to view the NLRB as a hopeless venue for workers’ rights and a place where organizing campaigns go to die.

There is a macho component to labor’s preference to organize and bargain without appealing to state intervention (even when voiced by women!). And it is absolutely true that if more unions adhered to an organizing model that prioritized organizing committees made up of workplace leaders, face-to-face conversations and escalating actions that challenge the boss’ authority that more unions would win without having to resort to the NLRB as an umpire. But even that kind of organizing would only bring a couple thousand workers into unions—the ones unions are currently spending millions of dollars to put organizers into the field to organize—not the tens of millions of workers that we need to organize.

The plain fact of the matter is that before the National Labor Relations Act (NLRA) was passed in 1935, unions only had an enduring presence in the coal and garment industries and a handful of skilled crafts. American employers have always fought unions with a fierce intensity. For crying out loud, Andrew Carnegie hired a private army to gun down his striking employees and their families! Unions need the power of the state to curb the worst abuses of corporate America.

And they do themselves no favors by not taking the NLRB as seriously as the right wing considers the board. The Wall Street Journal blared, “Don’t Ignore the Labor Board” in an editorial just four days after Trump was sworn in. The right’s think tanks and law firms spent eight years honing their anti-union agenda and the nation’s leading business paper was eager to implement it. I wish I could tell you that unions and their allies were devoting anywhere near the brainpower and enthusiasm to the subject of what the next Democratic-majority NLRB could accomplish.

Partly, this is a problem of institutional memory. When Bill Clinton took office in 1993, most activists could only recall the NLRB as being an awful adjudicator of workers’ right for the 12 years of Ronald Reagan-George H. W. Bush (and only kind of “meh” during the 1970s).

Take, for instance, the biggest missed opportunity of that period: restoring the legal right to strike. Employers in the 1980s blew the dust off of an obscure 1938 Supreme Court decision, called NLRB v. Mackay Radio & Telegraph Co., to legally justify firing and permanently replacing workers who went on strike. That decision contained two massive caveats: that an employer could not have union busting as its primary motivation for permanently replacing the strikers and that it would go out of business if it was not able to replace the striking workers.

The Reagan-Bush NLRB did its best impression of a fake wrestling referee and looked away, never seriously investigating an employer’s justification for hiring scabs to steal union members’ jobs. The AFL-CIO pushed a bill in the 1990s to restore the right to strike, but it was killed by a Senate filibuster. I am aware of no sustained effort by unions to convince a Democratic labor board to revert to the constitutional standard and force union-busting employers to prove that they’re not union busting and that they would go out of business if they couldn’t fire all of their striking employees.

Reversing the reversals and pushing forward

Late in its term, the NLRB under Barack Obama actually did issue a ruling that narrowed employers’ ability to hire permanent replacements because an employer was stupid enough to admit that its goal was, in part, to punish the union. That new standard is certain to be reversed or simply ignored by Trump’s NLRB. But it is an example of the kind of reform that unions should push the board to adapt in the first year of a Democratic administration.

Aside from restoring the right to strike, unions should push the next Democratic majority to move quicker to restore the Obama board’s policies and precedents. How many graduate students graduated out of the bargaining units they were organizing, waiting for the Obama board’s recognition of their rights? Given how nakedly partisan these actions have become, let’s just get it over with right away.

In terms of a proactive agenda, my favorite reform is to push the NLRB to re-establish an equal time rule for pro-union speakers if an employer forces employees to attend a mandatory captive audience meeting. Such a standard used to exist, and the NLRB is on record since 1966 as inviting unions to make a case that it should be restored. (Again, that pesky institutional memory caused a real blind spot.)

Another thought, while Yale graduate employees are fighting for recognition of the “micro-units” they won under Obama’s NLRB, is for unions to resume a vigorous pursuit of bargaining unit certification anywhere that enough workers want representation. As Charles Morris documented in his 2005 book, The Blue Eagle At Work: Reclaiming Democratic Rights in the American Workplace, the early NLRB used to certify minority unions as the bargaining agent for that union’s members only.

The directive that unions have to win majority support and must represent all workers regardless of their desire to be a part of the union was never the intention of the framers of the NLRA. But that burden has become a part of the system that traps us and restricts our growth and power.

Unions and their allies should be convening research teams to plot out a campaign of regulatory and judicial activism. That work should begin now.