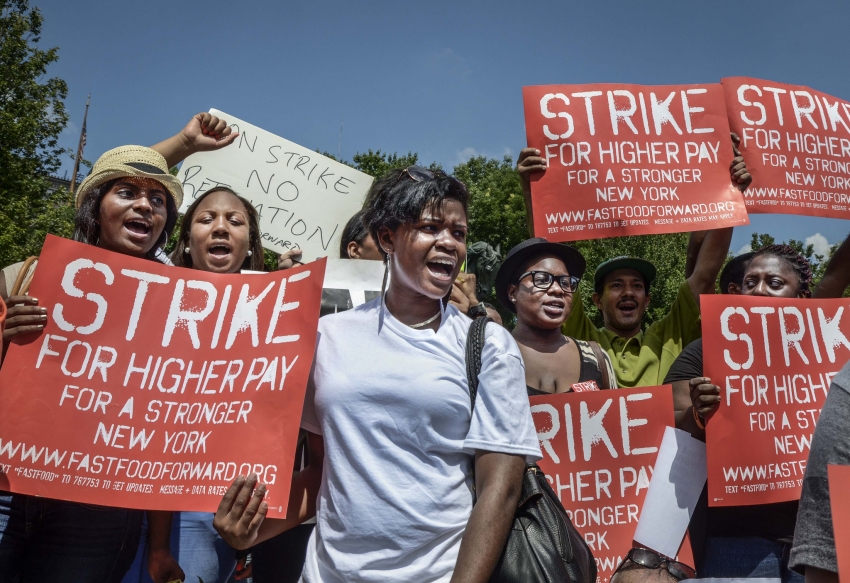 Valerie Wilson, Janelle Jones, Kayla Blado and Elise Gould wrote this article, which was first published by the Working Economics Blog of the Economic Policy Institute.

July 31st is Black Women’s Equal Pay Day, the day that marks how long into 2017 an African American woman would have to work in order to be paid the same wages as her white male counterpart was paid last year. Black women are uniquely positioned to be subjected to both a racial pay gap and a gender pay gap. In fact, on average, black women workers are paid only 67 cents on the dollar relative to white non-Hispanic men, even after controlling for education, years of experience, and location.

Why does this wage gap exist for black women?

Pay inequity directly touches the lives of black women in at least three distinct ways. Since few black women are among the top 5 percent of earners in this country, they have experienced the relatively slow wage growth that characterizes growing class inequality along with the vast majority of other Americans. But in addition to this class inequality, they also experience lower pay due to gender and race bias.

In the last 37 years, gender wage gaps have unquestionably narrowed—due in part to men’s wages decreasing—while racial wage gaps have gotten worse. Despite the large gender disadvantage faced by all women, black women were near parity with white women in 1979. However in 2016, white women’s wages grew to 76 percent of white men’s, compared to 67 percent for black women relative to white men—a racial difference of 9 percentage points. The trend is going the wrong way—progress is slowing for black women.

Myth #1: If black women worked harder, they’d get the pay they deserve.

The truth: Black women work more hours than white women. They have increased work hours 18.4 percent since 1979, yet the wage gap relative to white men has grown.

Over the last several decades, both black and white workers have increased their number of annual hours in response to slow wage growth. While men typically work more hours than women, the data reveal that growth in work hours, for both whites and blacks, was heavily driven by the growth of work hours among women. The increase in annual hours is particularly striking for workers in the bottom 40 percent of the wage distribution, where it has been driven almost entirely by women.

Working moms are significant contributors to this trend—half of all African American female workers are moms, as are 55.3 percent of Hispanic working women and 44.5 percent of white female workers – although women often face a wage penalty when taking time out of the workforce to care for children. While all moms are working more hours per year and contributing more to their households financially, African American working moms are uniquely central to the economic well-being of their families.

The data make it clear that there has been no lack of effort on the part of black women workers. Even in the face of persistent racial wage gaps, labor market discrimination, occupational segregation, and other labor market obstacles, black women continue to increase their annual hours and weeks worked per year. Myth #2: Black women can educate themselves out of the pay gap.

The truth: Two-thirds of black women in the workforce have some postsecondary education, 29.4 percent have a bachelor’s degree or higher. Black women are paid less than white men at every level of education.

The figure below shows average wages for white men and black women in 2016. As black women increase their educational attainment, their pay gap with white men continues to grow. The largest gap, of nearly $17 an hour, occurs for workers with more than a college degree. But even black women with an advanced degree earn less, slightly more than $7 an hour less, than white men who only have a bachelor’s degree.

This, again, in part likely reflects labor market policies that foster more-equal outcomes for workers in the lower tier of the wage distribution. It also may be affected by certain challenges that disproportionately affect women’s ability to secure jobs at the top of the wage distribution, such as earnings penalties for time out of the workforce, excessive work hours, domestic gender roles, and pay and promotion discrimination. Myth #3: The wage gap is the result of black women choosing careers that pay less.

The table below shows the average wages for black women and white men in a range of occupations. In various industries and occupations across the labor market, black women earn less than white men. Occupational segregation, which pushes black women into jobs mostly populated by other black women, has had an effect on the racial wage gap in recent years. But the racial wage gap is present in jobs dominated by black women and jobs dominated by white men, as shown below. While white male physicians and surgeons earn, on average, $18 per hour more than black women doing the same job, the gap for retail salespersons is also shocking, at more than $9 an hour.

As black women continue to be over-represented in low-wage jobs, policies that lift wages at the bottom will have a significant impact on their wages. An increase of the federal minimum wage to $15 by 2024 would affect more than one in four black women workers.

The data confirm black women are underpaid. The usual explanations of the pay gap perpetuate racial and gender biases and stereotypes of black workers as unmotivated and lazy, but the data tell another story. Regardless of their connection to the labor market, their level of educational attainment, or their occupation, they are paid less than their white male counterparts. The ongoing gender and racial discrimination faced by black women means that seven months into 2017, black women finally have equal pay with what white men earned last year.