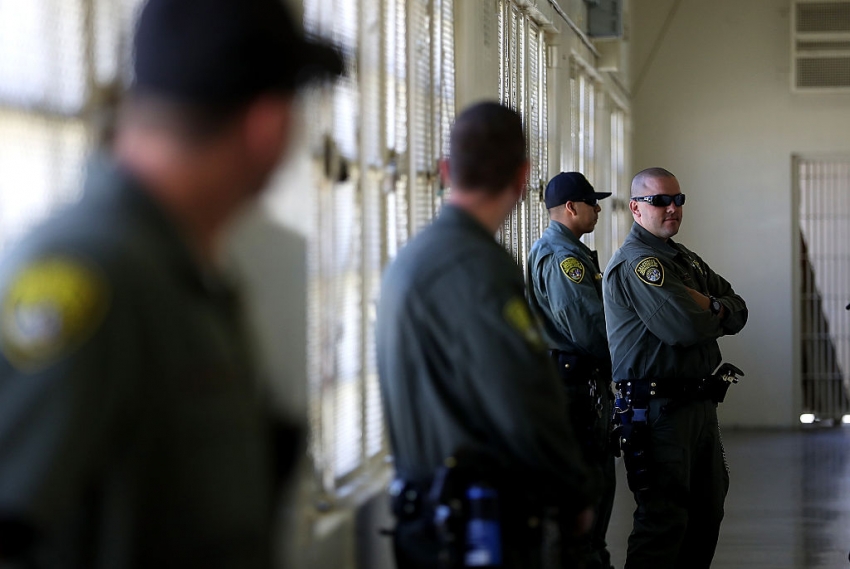 In July of this year, some 150 prisoners at the Great Plains Correctional Facility in Tulsa, Okla., rioted. The riot reportedly developed after a fight between prisoners and lasted for about eight hours. Two prison guards were taken hostage before the prisoners were corralled and returned to their cells.

The incident immediately led to calls for a guard increase. In January, the Oklahoma Department of Corrections announced it had a shortage of correctional officers relative to the state's growing prison population. Oklahoma has the second highest per-capita incarceration rate in the country, and the highest rates of incarceration for both women and black men.

Oklahoma isn’t an isolated case. Despite recent pushes for prison reforms and sentence reductions, the ranks of the incarcerated are growing in many states. Meanwhile, there’s a widespread shortage of corrections officers partially due to the profession’s cultural stigma as a job with less prestige than that of a firefighter or police officer. In 2014, 34 states submitted four-year prison projections to The Pew Charitable Trusts. Twenty-eight expected their prison populations to grow between 1 and 16 percent by 2018.

Oklahoma had a record 63,009 people in its system as of August. Over the last eight-and-a-half months, the state has added 2,000 prisoners—four times the growth projected by a governor’s task force in February.

There have been a number of legislative efforts to reform Oklahoma’s criminal justice policies and potentially lessen its number of prisoners, but these efforts have often been thwarted by the state’s conservative government. Jessica Brand, legal director of the Fair Punishment Project, a national organization that advocates for a fair and accountable justice system, tells In These Times that the state’s aggressive district attorneys also deserve a large chunk of the blame.

“Criminal justice reform is possible in Oklahoma, but in the past these efforts have been met with strong resistance from elected prosecutors,” Brand says. “The district attorneys of the state's three most populous counties–Oklahoma, Tulsa, and Cleveland–opposed a referendum to lessen sentences for drug possession offenses in 2016, and [Oklahoma County District Attorney] David Prater remains a strong defender of civil asset forfeiture at a time when the practice is receiving bipartisan condemnation.”

Calls for prison guard increases are, of course, calls for an expanded corrections budget, and prison guard unions are usually at the forefront of these pushes. For instance, the Oklahoma Corrections Professional association is calling for more prison spending. And even though the Tulsa riot took place at a private prison, Oklahoma Correctional Professionals Executive Director Jackie Switzer says it could happen at any state-run facility. Switzer also says many state prison guards don’t feel safe because there simply are not enough officers.

“Most of our state agencies see a rise in incidents,” he said to local media shortly after the riot occurred. “We can’t keep putting Band-Aids on them. We have to have the funds to fix the problems.”

While police unions have faced their share of criticism from progressives, the role that correctional officer unions play in the expanding the prison-industrial complex is often overlooked in the recent scrutiny of the justice system sparked by the Movement for Black Lives.

“Prison guard unions often have a strong incentive to push back against reforms, because so much of what we spend on incarceration goes to correctional officers,” says John Pfaff, a Fordham Law School professor and author of Locked In: The True Causes of Mass Incarceration—and How to Achieve Real Reform. This is why these unions have such a strong incentive keep correctional spending high, says Pfaff.

“In theory, the unions would likely be fine with prison population cuts as long as they didn’t require prison closures and layoffs,” he says.

In California during the 1990s, the California Correctional Peace Officers Association (CCPOA) pushed for three-strikes legislation and fought attempts at parole reform. These actions helped dramatically increase the union’s membership, which went from 5,000 in 1982 to 31,000 in 2011.

One simple solution to prison overpopulation is to release more people on parole. Although Oklahoma’s GOP governor, Mary Fallin, has declared criminal justice reforms to reduce incarceration as her top priority, she’s fought efforts to reform the state’s parole system and intervened to block parole for hundreds of offenders.

This summer a group of prisoners sued Fallin, alleging unsafe conditions and unjust parole hearings. Oklahoma-based prisoner advocacy group All In One Project, whose members make up many of the plaintiffs, says it has petitioned the Department of Justice to intervene.

The lawsuit also alleges that Oklahoma imprisons a disproportionate number of African-Americans and poor people, as well as an unusually high percentage of women, while the state’s prisons remain some of the most dangerous in the country.

In 2015 more than $451 million was spent on Oklahoma’s prisons, according to an analysis by the Vera Institute of Justice. According to a recent report by the Oklahoma Justice Reform Task Force, if the prison population in Oklahoma continues to rise, the state may have to spend another $1.9 billion on the prison system over the next 10 years.

This price tag may be good news for only one group: prison guard unions.